Check out our Q & A with Asa Alger, creator of the Adventure Box!

Back in September, a few SparkFun folks headed east to New York for the New York Maker Faire. While we were there we met Asa Alger, who had a prototype of an innovative new project - an interactive toy vending machine called the Adventure Box that dispenses unique handmade toys. Our own Dia Campbell even contributed an e-textiles kit to the project! We talked to Asa recently about his project and how it came about. 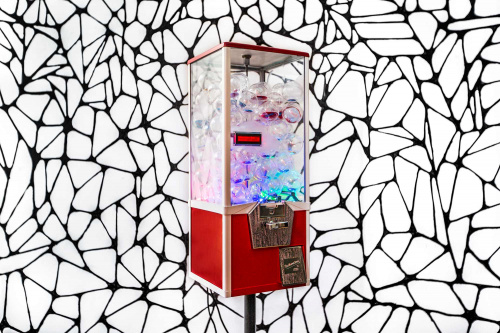 Can you tell us a little bit about yourself and what you do?

I come out of an advertising background, where I focus on interactive installation design. This involves merging a lot of digital technologies with a physical, first-person experience. This very quickly led to me learning and experimenting with physical computing and breadboard-type inventions. I left my full-time position last spring and began working as a freelancer. This gave me more time to focus on experiments and personal projects, such as Adventure Box.

How does the Adventure Box work?

The Adventure Box is filled with handmade toys created by friends of ours, local artists, artistic collaborators, and even SparkFun's own Dia Campbell. It launched at the AC Gears store in Manhattan on December 3rd, where it will be for two weeks. The toys will be sold for $10.00 each, and 20 percent of that money will be donated to Hurricane Sandy relief efforts. Afterward, the machine will be hosted by the Brooklyn Robot Foundry for the remainder of the year.

Inside the Adventure Box are a number of technologies working in harmony. An Arduino Mega forms the brains of the machine, with a number of attached components expanding its capabilities. An LCD display allows toy information to be shown to customers. A strip of LED lights give a beautiful glow to the box and toys. A trio of RFID readers, managed by a transistor array, scan each toy as it goes through the chute. An additional Arduino board with a WAV shield stores mp3 files and plays them through a stripped-down miniature guitar amp and speaker inside the machine. The Arduino Mega has an Ethernet shield attached, which allows the unit to communicate with an online database via intermediary php scripts. It also allows the machine to tweet by itself, notifying the world and the artist when a toy is sold.

Each toy vended includes a unique code that can be used on the Adventure Box website. This will allow the user to find out more about the toy, how it was made, the artist, and more work by that artist. The website also contains information about the technology inside the machine, information about the creators, and a link for anyone interested in contributing to the project. The site is designed to allow a customer to continue their experience online long after the brief moment of interaction with the machine itself. 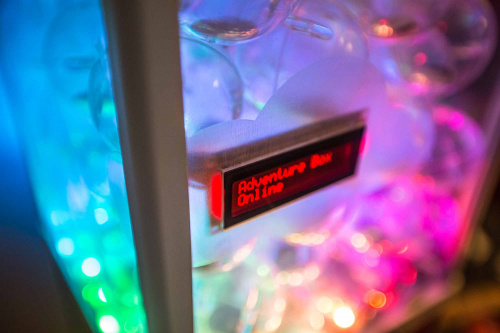 What was the inspiration for this project?

The inspiration for the Adventure Box started very simply. I was talking with a friend of mine about how we both loved vending machines, but really hated the stuff that was usually sold in them. We then mused upon the idea of buying a vending machine and filling it with toys that we made ourselves. Something about that simple concept stuck with me, and I decided to run with it. I decided quickly that if the vending machine was going to dispense awesome toys, the machine itself would have to be just as awesome as the toys were. And after plenty of experiments and discussions, the final concept and form came to life.

How long did the Adventure Box take to complete, and what materials did you use?

I started the project at the very beginning of 2012, so I have been working on it for approximately 11 months. The first four months or so were spent figuring out the basic functionality of the machine. The next couple months were used to improve, polish, and add to this foundation. In the second half of the year we focused on the aesthetics of the machine, toy making, and building the website.

I used quite a number of SparkFun products in building the Adventure Box. Specifically, I purchased four RFID readers from the ID series, several Arduino boards, an Ethernet Shield, plenty of wires, and an assortment of breadboards and project housings. The other significant electronic components in the machine are a stripped apart guitar amp, LED lights, an LCD display, and one mp3 shield. 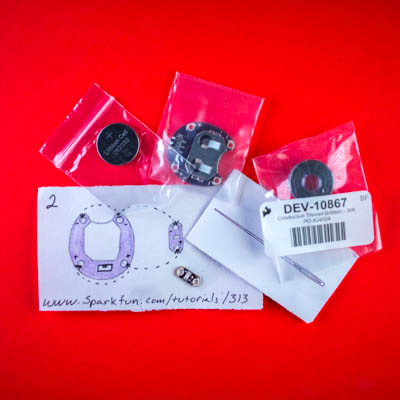 Where do you hope this project will go in the future?

I am very excited about the future of Adventure Box. We started this project under the Toy Box Project umbrella, with the intent of expanding the idea. We have a number of avenues we are exploring for the next year. We are looking at building a second version of the machine that is easier to reproduce and more stable. We then plan to use it for rental or purchase, with brands and stores that want to put it to good use. We also hope to continue providing a cool venue for artists to get their art out into the world. Lastly, we are hoping to design our own custom toy line to be sold exclusively in our machines. The sky is the limit and we are very excited to start working on it.

What would be your advice for someone hoping to make their own electronics project?

Two things: Firstly, never say no. Everything is possible, and every project is a learning project. Don't ever limit your ideas to your current skills and knowledge. Be willing to learn and challenge yourself with every project. Secondly, use your community to the fullest extent you can. Join internet forums, talk to other makers, learn from examples, and find a local hackerspace you can be a part of. The internet is the single most useful tool for education and communication out there, and by embracing it you can create things you never thought possible.