We sat down with Clive Maxfield to chat about EE Times, DESIGN West, and more.

DESIGN West is just around the corner (April 22-25, 2013) and this is an event you do not want to miss. As they describe it, it's "TED meets LED." Also, SparkFun will be there doing some workshops!

We recently spoke with Clive "Max" Maxfield, friend of SparkFun, Editor in Chief of All Programmable Planet and editor of the EE Times Programmable Logic and Microcontroller Designlines, about DESIGN West, his involvement with the event and more. Check it out! 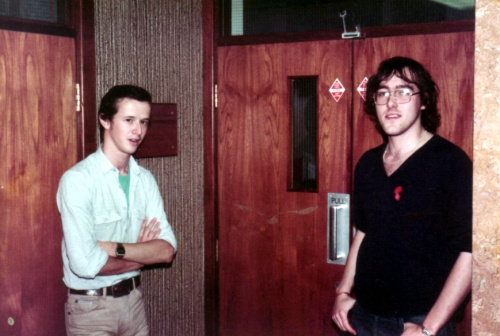 Max (right) during his days with Cirrus Design.

1. Can you tell us a little bit about yourself?

Ever since I was a kid I wanted to work with things like robots. This was when electronic products were largely made out of individual transistors, resisters, capacitors, and inductors – also there were simple 7400-series TTL chips around. When I went to university, I started off doing an electronics course, but a lot of it was boringly theoretical to me – like working out the angular momentum of electrons (something I could do at home if I wanted), so at the end of the first year I switched to a 4-year course in Control Engineering – a central core of Math with “surrounding” subjects in electronics, mechanics, and hydraulics and fluidics.

When I graduated with my BSc in 1980, my first job was at International Computers Limited (ICL) on a team designing CPUs for mainframe computers. We created our designs as gate-level schematics using pencil and paper. I was designing ASICs containing ~2000 equivalent gates (these were pretty big at that time).

After a year two of the managers left to form their own company called Cirrus Designs and they invited me to join them. The above photo is a pic of me from around that time – I’m the one on the right – the other guy is Joe Murray, with whom I am still friends. At Cirrus Designs one of my tasks was creating functional test programs for PCBs. These programs ran on GenRad 2225 testers. We created these programs for third-party companies to make money to keep our other projects going. Typically, all I was given was a known-good board (which often wasn’t good) and a set of gate-level schematics that were supposed to be the same rev level as the board (but often weren’t) – this was the best training I ever received.

Anyway, from there I started using one of the first digital logic simulators. Then I started training other people to use it, which involved creating all the training materials and traveling all over the world. In 1990, I was hired by Intergraph Corporation based in Huntsville, Alabama. In 1993, I started writing my first book (which was published in 1995) – Bebop to the Boolean Boogie (An Unconventional Guide to Electronics) – this is now in its third edition and is still very popular to this day.

Following Bebop I wrote a number of other books and a lot of technical articles that were published in a variety of magazines, including PCB Design, EDN, EE Times, and so forth. Over time I realized that I was doing more writing than engineering. Now I act as the editor for the EE Times’ Programmable Logic Designline and Microcontroiller Designline websites, and also as Editor in Chief for the All Programmable Planet website.

2. What is DESIGN West and what is your involvement?

DESIGN West is the world's only technical conference and expo for electronics design engineers, entrepreneurs, and technology professionals who create products with electronic content. Held in the heart of Silicon Valley, it is where the world's top design engineers and product developers gather and learn, gain inspiration, and get practical information and hands-on training they can put to immediate use.

My involvement in DESIGN West 2013 is that I am the track Chair for the “Processors and Programmable Devices Track." Also I am giving two presentations myself:

Also, I know the folks at SparkFun (Chris Taylor [Ed: SparkFun Engineer] has a number of blogs on All Programmable Planet). I love all of the different training sessions you provide and the cool projects you create. I also love the fact that you are instrumental in keeping hobby electronics and computing alive. When I heard that DESIGN West was looking for companies to provide live training sessions on the show floor, I immediately thought of SparkFun, and I am absolutely delighted that you are going to be provide the live training sessions on one of the days.

3. What is your experience with SparkFun?

My first experience was reporting on all of the training activities you were providing – also your annual robot and racing competitions. Then I started seeing some of the cool projects you created like the physical TETRIS light panel, which sparked off all sorts of ideas in my own mind. Later, when I became Editor in Chief of All Programmable Planet I heard that SparkFun (which is famous for its Microcontroller-based development boards and training) was branching out into Programmable Logic (FPGAs) in the form of the Papilio development board. That’s when I invited Chris Taylor to become a blogger on All Programmable Planet.

4. Can you tell us a little bit about EE Times and your role there?

For more than thirty years, EE Times (Electronic Engineering Times) has been the electronics industry newspaper of record for design and development engineers and technical managers in America, Europe, Asia, and Japan. Way back in the mists of time – when I was still predominantly an engineer – I used to write technical articles that were published in EE Times. More recently I became an editor for the EE Times’ Programmable Logic Designline and Microcontroiller Designline websites.

5. Open-ended opportunity here. What should we know about you, your work, or DESIGN West that you haven't already shared?

I think the main thing is that I LOVE electronics and I LOVE learning things. I also have a huge interest in Physics, Chemistry, and Biology, plus I love reading science fiction and fantasy – so I always have a number of books that I’m reading at any one time. I also love creating weird and wonderful hobby projects. These are often electronic in nature, but I do tend to bounce around a lot. I’m currently making a huge mosaic version of Vincent Van Gogh’s “The Starry Night” – as part of this I decided to make my own tiles, so I purchased a small kiln and am currently experimenting with different clays and glazes.

In the case of DESIGN West, I think that this year’s conference and exhibition is going to set the standard for years to come. If you look at the “Processors and Programmable Devices” track, for example, you’ll see that it’s jam-packed with interesting sessions (I want to attend them all). Also, we have some fantastic live training sessions lined up  – like SparkFun’s – in which attendees are presented with a development board (which they can keep) and given a 1-hour training session on some aspect of electronics (using microcontrollers, creating wireless network applications in the Python programming language, etc.)

For more information on DESIGN West or to purchase tickets, head here. Thanks for reading!

New Product Friday: On the Go