We have an update on the happenings for AVC and another episode of "Engineering Roundtable."

First off, we have an exciting announcement about the 2013 SparkFun Autonomous Vehicle Competition. After months of filling out forms, writing emails, and making phone calls, we've nailed down a date and location for the 2013 SparkFun AVC. The event will take place on June 8, 2013 at the Boulder Reservoir.

If you're not familiar with the AVC, this has become SparkFun's signature event where competitors race against each other with DIY autonomous vehicles. In the past, the event has been held at SparkFun HQ, but the AVC has officially outgrown our location so we're moving it to the reservoir. 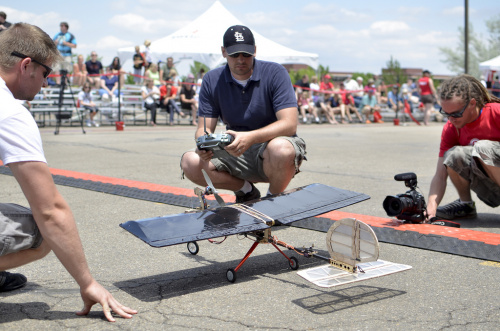 Details, like entrant and spectator signups, will be coming soon, but we have now locked down the date and location. Plan accordingly! We'll be posting again soon with more details, a course preview, rules, and other info. We hope you can make it for what should be an awesome day of robotics!

Today, we have a new episode of "Engineering Roundtable." We are also introducing a new "character" (and a character, he is) - Paul, SparkFun Mechanical Engineer. In today's episode, Paul discusses his homegrown pan/tilt camera mount. Check it out:

As usual, leave any comments or suggestions for Paul in the comments section below. We hope you enjoy the video and we'll be back in a few weeks with another episode of "Engineering Roundtable."