An electronics geeks tribute to one of the greatest shows of all time.

Today, I would like to introduce you to my latest creation - the NeverNude prototype in honor of the new season of [Arrested Development](http://en.wikipedia.org/wiki/Arrested_Development_(TV_series) that will be released on Netflix on May 26th. If you're not familiar with the show, I hope this ridiculous project piques your interest enough to watch this hilarious series.

There are so many amazingly ridiculous things that happen in this show that it's difficult to select only one to celebrate. However, I have a particular affinity for Tobias Fünke's "never-nude" condition. Prior to moving out west I was hiding from adulthood and working on my doctorate in Gainesville, Florida. It's home to the University of Florida, the Gators. A part of my heart and soul remains in this town, but I will never understand the football fervor. People live and die by Gator football in this little town that magically juxtaposes a typical liberal university town with its redneck roots. If there's a single unifying icon of this bizarre conflation, it's jorts. Here's a little backstory.

So, back to Arrested Development. I nearly lost it just past the eight minute mark in the episode In God We Trust when Tobias's "never-nude" condition is revealed. This particular aspect of the show always stuck with me - must be nostalgia from my time in jorts-country or growing up with a father that donned ripped jean cut-offs like a uniform.

Just before end of day on Friday I decided that I wanted to spend the evening playing with some of our electroluminescent (EL) offerings. I didn't have a particular project in mind so I reached out via social media for ideas. A conversation with a friend surrounding a project that would require a flesh-toned leotard eventually led to a "never-nude" reference. Moments later I found myself drawing up the NeverNude prototype. 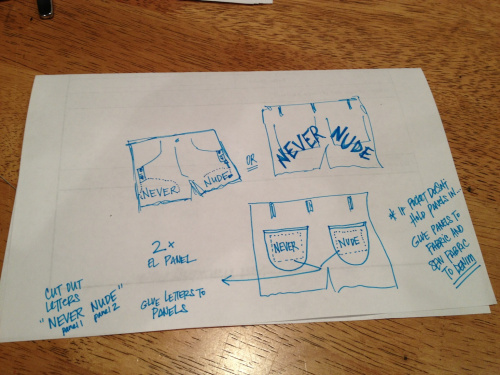 I found an old pair of jeans just waiting to be reborn as a NeverNude prototype. I opened a text document and set the dimensions to match the EL panels. After finding the font size that would perfectly fit the panels I printed "NEVER" and "NUDE." I then cut out the printed letters and taped them to the EL panels. 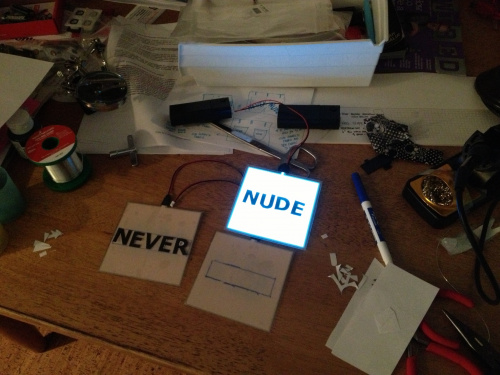 The EL panels made for a perfect fit in the back pockets of this pair of jeans. I cut out squares from the outer layer of denim so I could tuck the panels into the pockets and use the existing seams to keep them in place. In my excited haste I made my cuts a little bigger than I would have liked. Hooray for prototyping - I'll get it right in the final product. I was pretty happy with the prototype so I slid the inverters into the front pockets and cut the pants into jorts. 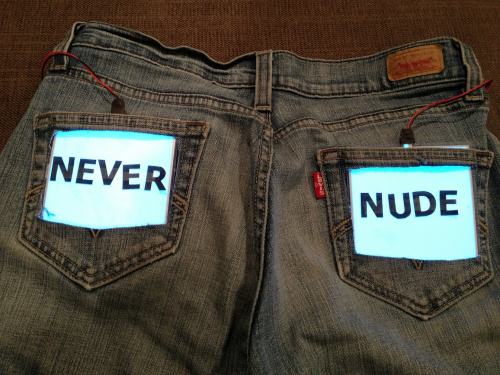 I tweeted a picture of the prototype to the "never-nude" himself, David Cross. The next morning I discovered that he had "Favorited" the tweet. I have to admit that was rather satisfying. 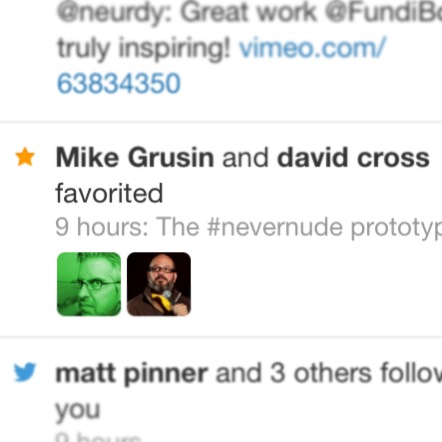 Things you don't expect to see in your Twitter feed...

In the final product I will adhere fabric or vinyl letters to the EL panels and hide the wires inside the shorts errr jorts. You could also easily lengthen the wires from one of the EL panels, attach a JST connector, and plug both panels into the same inverter. This would also allow for better timing with the flashing.

If you happen to be running the Rave Run 5k in Denver next Saturday be on the lookout for the flashing NeverNude prototype as you pass me!

And remember, there is always money in the banana stand.