In which Pete and Dia travel to Olin College to perform gruesome dissections and help bring to life an army of cyborg critters.

A couple weeks back, the infamous Pete Dokter and I got the opportunity to take a luxurious* trip to the Northeastern United States, visiting Brown University, MIT Media Lab, and Olin College.

While we were visiting, Amon Millner was kind enough to invite us to see first-hand what his students were up to in Olin's Principles of Engineering class. We packed up some components, he mustered a big pile of homeless plush creatures, and members of his class and community gathered to see what we could make in a few hours. 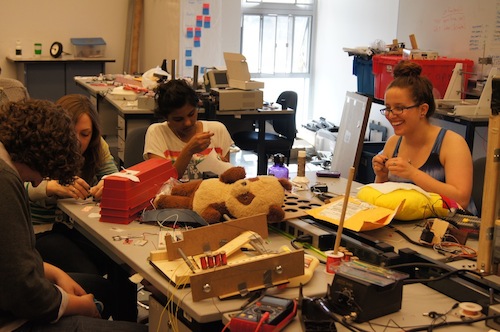 For the first half of the class, we kept it simple. Guests and students combined the LilyTwinkle with the Wake-on-Shake to create motion-sensitive light-up critters. 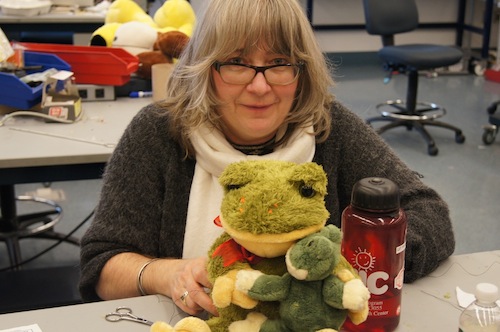 Susan of Teach 2 Learn, Learn 2 Teach with her motion-sensitive frog!

One of the most popular projects, for obvious reasons, was a unicorn with a light-up horn. In addition to being a much-needed upgrade to what we're told was an unloved surplus unicorn** in the household, it also became the most meme-worthy footage of the day! 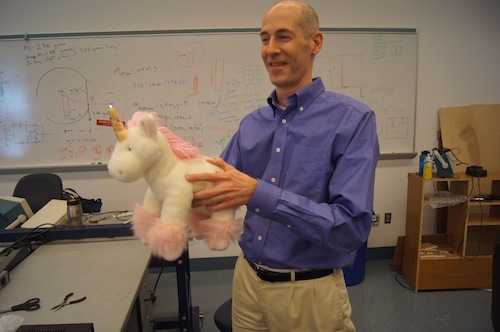 After the simpler projects were done, it was time to get down to business for the rest of the afternoon. A group of students from Amon's Lifegraphs team showed us what they've been working on by hacking their animals further. 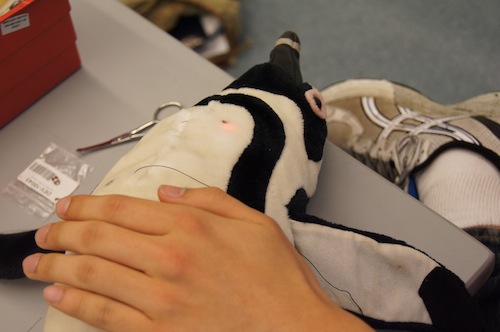 It's going to be okay, little guy!

With the addition of a little more equipment, including an Arduino board and one of our WiFly modules, they were able to use the system they've written to get their animals connected to Facebook before the anesthetic even wore off!

When one group's penguin hugged itself (such that the conductive fabric patches added to the flippers touched), it posted an alarming message to the user's Facebook wall:

The 'Notie Odie' had an LED tongue piercing that lit up to alert the user that there were Facebook notifications to check. 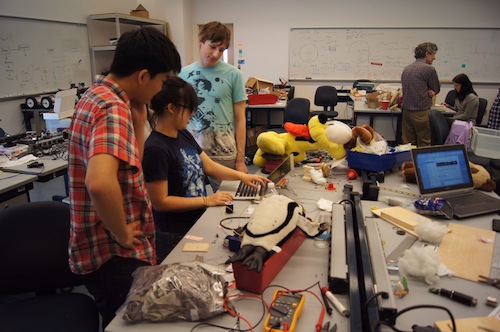 What these students are doing is definitely going to make it ever-easier to connect your projects (e-textiles and otherwise!) to your social media accounts. Seeing them at work was amazing, and I'm really excited to delve further into their tutorials for my own projects. Thanks again to Amon and Olin University for having us out to play, and we hope to see everyone again next year!

*We got to crash at Kipp's house! There was pizza!
**We should all have such problems, no?

According to Pete - Analog to Digital Conversion