How to handle the child for whom disassembling their toys is more fun than actually playing with them.

When I was a wee lad, back in the late Cretaceous, you could pretty much count on my Christmas presents not staying intact for more than a day or two.

I loved presents that let you make things, like Tinkertoys, Legos, and art supplies. And I tried my best (and probably failed miserably) to grin thankfully for the more “practical” presents like corduroys and socks. But my favorite presents were electronic toys - spaceships and tanks and robots; things that rolled around, lit up, and made noise. I liked playing with them, but what I liked even more was trying to learn their secrets. 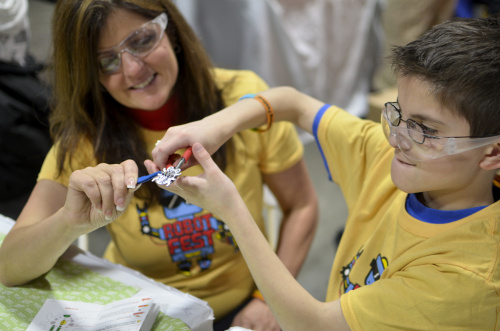 After playing with them for less time than either my parents or the manufacturer probably intended, I would get the screwdriver out of its home in the junk drawer in the kitchen, clear a space on my bedroom floor, and start an exploratory break-in. My code of ethics was to do no harm; I wanted to explore, not ruin, so I would keep careful track of everything that came off so it could be reassembled in reverse order. God forbid when (not if) the family dog would come running up, slipping on the floor, and scattering my carefully-placed exploded-view layout of parts and screws.

Disassembling things that aren’t meant to be disassembled is a fun challenge. I quickly learned that sometimes screws are obvious, sometimes they’re at the bottom of a deep well (I now own a special two-foot Phillips for such occasions), and sometimes they seem to be missing altogether. A telltale dimple under a sticker or an opened battery compartment would often reveal that final screw. Or perhaps a seam and its hidden catches could be coaxed apart with some gentle prying (often leaving unfortunate marring in the plastic, a personal failure. This was long before I learned about spudgers and other right-for-the-job tools).

When a toy would finally fall open, a hidden world of structural buttresses and cheap PCBs would reveal itself. I’d poke through the workings, finding clever things I didn’t know the names of yet. Once I had a thorough look and some “aha!” moments, I’d do my best to put everything back together. This was harder for toys packed with mechanisms and springs that “exploded” on disassembly, and sometimes took several attempts when the reassembled toy didn’t work quite right. (A telescope that didn’t “see” properly on reassembly taught me both about the directionality of certain lenses, and how quickly binary trees can grow.) But in general I would successfully get everything back together. And I’d keep playing with that toy, but with a new and deeply satisfying knowledge of the secrets that lay within.

I’m guessing that a lot of you reading this did the same thing. Or perhaps your children are doing this, and you’re wondering what it all means and what to do about it. (Spoiler alert: you’ve come to the right place.) 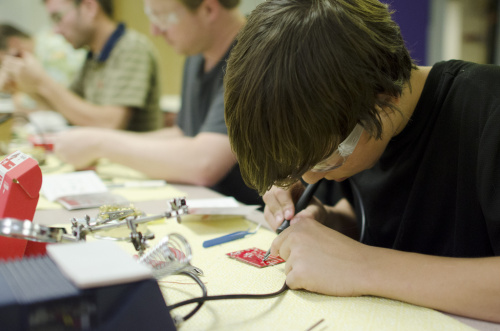 At first my only goal when taking toys apart was to find out what was inside. The impulse to explore the unknown; to find out what’s inside the locked box, outside the walls, or what’s at the other end of a network cable, is deeply human and at the heart of hacking (the good kind).

Anything you take apart and learn the secrets of is example code for your future creations. There are a lot of discoveries and lessons to be learned about engineering and design just by looking at the innards of a toy, or for that matter pretty much any commercial product. (Many of those lessons involve design for manufacturing, where things were meant to never come apart again. If you want to learn about design for maintenance, you should take apart some old test equipment from HP and Tek. Beautiful stuff that will make your heart sing if you've ever struggled trying to open a product marked "NO SERVICEABLE PARTS INSIDE".)

Before long the lessons learned while taking toys apart and putting them back together became useful when they inevitably broke. Often the failure was hidden in a circuit board, something I couldn’t do anything about at the time (but vowed to learn someday). But sometimes the cause was obvious; a broken hinge that could be glued, a spring that had slipped off its hook, or a wire that had obviously become disconnected. Being able to fix a broken toy was quite impressive in one’s peer group. And noticed by my sharp-eyed parents.

Beyond some common-sense ground rules like “don’t take apart things that don’t belong to you” (there may have been an unfortunate incident involving the living-room stereo), my mom and dad were surprisingly supportive of what to them was probably unusual behavior for a child (my parents were musicians, not engineers). My dad started giving me things like a cigar box of old watch parts (his father was a watchmaker). Mom expanded the single junk-box screwdriver into a small set of tools (and eventually a soldering iron). But the thing that broadened my mind the most was my parent’s bookcase, particularly The World Book Encyclopedia. Before the internet (get off my lawn!), you could fit a decent summary of humanity’s achievements in about three feet of shelf space, and there I learned how the telescope worked (and the story of its invention), that the cool mechanism I found was called a "worm drive" (and was only one of an infinite variety of clever mechanisms), and what was inside the things I tried to take apart but still couldn’t figure out, like batteries (protip: they're filled with mess; do this outside). Even with the vastness of the internet, books are still excellent for browsing, and any research I did would inevitably lead to more fun facts - looking up "battery" would lead to a nearby article on "battering rams", then "siege weapons", then... (The internet still wins for funny cat pictures though.)

Eventually I graduated from fixing what was fixable, to repurposing, modifying and (shudder) cannibalizing. I found I could add a headphone jack to a radio that didn't come with one. A broken VCR (I told you to get off my lawn!), spotted in a trash can on my walk home from school, would quickly turn into a pile of cool motors and buttons and displays. Not all of which I knew how to use yet, but each part was a gateway to new knowledge and possibilities. Those early days with a screwdriver and a toy on my bedroom floor started a long, fun trip that ended up here.

Many of us at SparkFun, right up to Nate, grew up doing this, and we'll still take stuff apart today at the slightest provocation. (The fashionable term is “teardown”.) Even today it is as rewarding and educational as it ever was. Nick Poole recently brought a box of old pinball workings by my office to show off how clever they were. The fun part was that all of the electromechanical logic was right out there in the open; you could easily trace how bumper inputs would fire solenoids that would advance mechanical score counters, etc. Aside from making us feel like kids again, it's good to be reminded that there are more ways to solve a problem than just throwing transistors at it. The more broadly you can think about solutions, the more problems you'll be able to solve.

So thank you mom and dad and parents and teachers everywhere for encouraging this kind of curiosity, even if it occasionally errs toward the destructive side. Encouragement, tools, and access to knowledge will get a child anywhere and everywhere, and I’m thankful every day that I was provided with those things. If you have a child of a certain age, consider taking a screwdriver to an old toy together, and discovering what's inside.

All of us at SparkFun hope you got what you wished for this holiday season, and have a happy and prosperous new year! 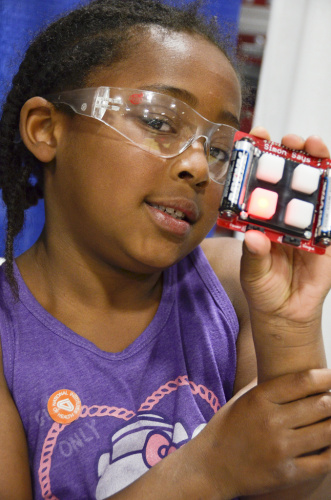