A few years ago at Maker Faire New York a grown man with a teddy bear came up to me. He introduced himself as Aaron Horowitz and thanked me for being awesome. I was more than a little taken aback. Aaron had applied for sponsorship and gotten $100 worth of SparkFun parts to wire up his teddy bear to help educate kids about diabetes. What I didn't realize is just how awesome Jerry the Bear was about to become! 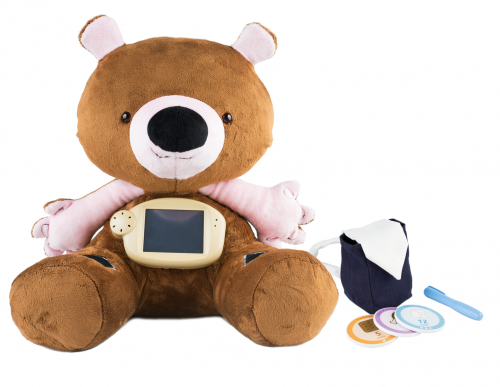 Not everyone at SparkFun gets to travel and visit with our awesome users, so we bring in a handful of guest speakers each year so that SparkFunions can see and talk to folks doing awesome work. Aaron was one of those folks nice enough to make the trek to Boulder and share his and his co-founder Hannah's project, Jerry the Bear. If you get the chance, you have to hear their story! Aaron is funny, passionate, a great speaker, and, from the technology side, Jerry the Bear is the perfect combination of using modern tools to help make the world a better place. Everyone at SparkFun left Aaron's talk feeling wonderful that people like him were building amazing things.

Fast forward a year and a half and that same crazy guy with a teddy bear, and his co-founder Hannah, have designed, built, and delivered over 300 bears to families and children with type 1 diabetes. I don't have diabetes so Aaron had to explain it to me this way: Imagine you're six and everything is ok, then your parents start to get upset and they start poking you with needles. It's incredibly scary, with little explanation as to why this is happening. Jerry the Bear was created so that those kids could have something to relate to and learn from.

And you know what? It's working. Working fabulously. Jerry is teaching young kids what diabetes is and how to manage it. After one year Jerry, Hannah and Aaron have reached 2% of the kids newly diagnosed with type 1 diabetes this past year. It's one thing to say that you're going to change the world; it's another to do it.

I cannot say enough good things about Jerry and the team behind him. After tackling 2% they are now trying to help every child newly diagnosed with diabetes. That's something like 12,000 bears. It's audacious and I love it. I'm thrilled to know Jerry's story - you should too.

SparkFun Live Today! Nate and Pete "Ask Me Anything"