The release of Arduino 1.6 has really improved my Arduino-programming life thanks to custom platform support, command line utilities and line numbers!

Just about a month ago, Arduino made it officially official: Arduino 1.6 became the supported, non-beta version of the ubiquitous IDE. After 1.5.x had languished in "beta" for over a year, 1.6 brought with it a huge list of long awaited improvements.

Putting aside my Arduino hipsterism ("Arduino peaked at 0022"), I downloaded the latest release. I'll be honest, aside from breaking all of our 3rd party hardware additions (fair enough, we had over a year to prepare), the upgrade to 1.6 has greatly improved my Arduino-programming life. Here are a few reasons why:

UI/UX improvements - Arduino-programming has become much more streamlined with the release of 1.6. Some of the huge experience improvements include: 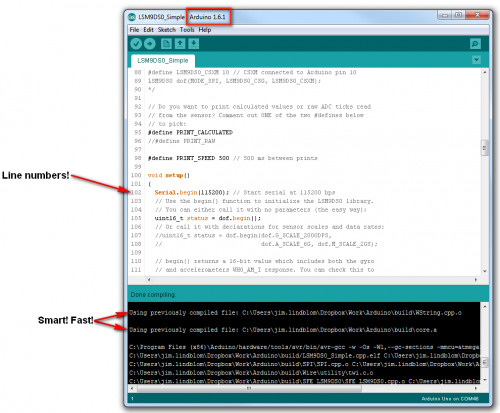 For better or worse, the IDE looks about the same, but a lot of minor changes have made my Arduino-ing a much happier experience.

The upgrades to avrdude and avr-gcc means the IDE can compile for and upload to all sorts of latest, greatest AVR chips. The ATmega128RFA1 was one of those chips (not even that late or great anymore). With the release of Arduino 1.6, I was happily able to update the tutorial and take out the "How to Update WinAVR" section.

Command line Arduino -- The Arduino executable now serves as both the GUI we're all used to and a command-line utility. If you're beginning to stray the line between Arduino and more makefile-dependant environments, or looking into automating Arduino-realted tasks, this is definitely something worth checking out. Tools like Ino, have made command-line Arduino possible for a long time, but it's really neat to see the support built in.

The Arduino command line API is documented over here on GitHub. You can use it to compile and upload sketches, and set all sorts of under-the-hood preferences, like your build path.

This utility isn't without its quirks, the most major of which being you can't seem to pass it relative paths -- you're stuck typing (or tabbing) out your sketch path every time. Plus, it seems to briefly open the GUI every time you give it a job. Nevertheless, this is a great start and much needed improvement to the IDE.

Support for multiple platforms -- Arduino isn't just a purely AVR IDE any more, with the Due and approaching Arduino Zero, ARM support also had to be built in. They implemented this support with a pair of text files and a standardized directory hierarchy. A "boards.txt" file is still required to add additional, custom boards to the IDE, but 1.5.x also introduced "platform.txt", which sets up the compiling, linking, and uploading patterns for any specific architecture. Check out the spec here. 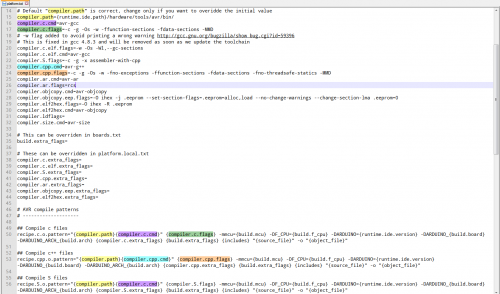 platform.txt allows you to really get into the nitty, gritty details of sketch compilation.

Updating our board definitions took a bit of clerical work, but was relatively painless. Now all of our Arduino board addons can be found in our Arduino Boards GitHub repo.

This feature is really keen to my interests right now -- in my downtime I'm working on an Arduino extension for those hip, new ESP8266 WiFi SoC modules. Even though the ESP8266 has a weird non-AVR, non-ARM core, with a little customization Arduino can still be used to compile and upload code to the cheapo WiFi modules. 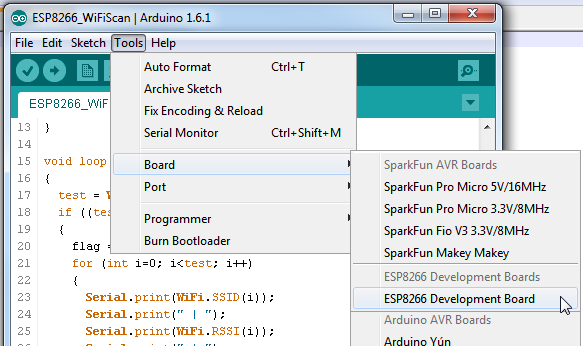 Arduino 1.6 allows you to create custom boards that are neither ARM nor AVR.

Should you be using Arduino to develop firmware for such a complex piece of hardware? That's another question...

The Arduino IDE isn't without it's problems, but its simplicity is hard to compete with. There's something comforting about writing a single "sketch," and assuming all of the other libraries are just going to work. Hopefully Arduino is able to continue improving the IDE, without breaking support for the exhaustive list of third-party libraries and hardware. They seem to be doing a great job lately (potentially competing Arduino IDE's aside).

Fun In The Oven