A call to viewers across the world to join AVC and control one of the robots.

And remember, this AVC is going to be bigger than ever with free soldering workshops (scroll down to the bottom of the post to register) all day, the grand opening of the SparkFun Emporium, building tours, and Combat ‘Bot battles! We also have a number of workshops going on throughout the day, covering topics like Intro to 3D Printing with LulzBots, Moog Werkstatt Music Workshop and Intro to Aquaponics and the Internet of Things. If you are interested in the workshops, register now before they fill up!

The event opens to ground and combat bot teams at 7am MST and spectators at 9am MST. Please don’t come before 9am unless you are a AVC entrant. Also, please leave dogs, alcohol and your aerial drones at home.

Also, we’ll have raffles all day giving away SIK’s, LIDAR’s, RedBot Basic's and tee shirts. We’ll have some fun AVC swag and free water bottles. There will be four food trucks on site, Bodacious, Wheel and Whisk, French Twist and Verde!

Plus all the robots!! Speaking of robots, I’ll hand it over to Shawn, SparkFun Creative Engineer, for a post about his twitch bot.

I would like to run a social experiment at AVC this year, and I need your help. Perhaps you have heard of "Twitch Plays Pokémon." Perhaps not. If not, then a little history lesson is in order.

Twitch.tv is website for streaming live video with a focus on video games. If you want to watch good players hold a lane in League of Legends or pop head shots in Counter-Strike: Global Offensive with full commentary, then Twitch is a good place to start.

On February 12, 2014 an anonymous Australian programmer launched a social experiment that connected the old Game Boy game, Pokémon Red, to Twitch.tv and allowed users to control the protagonist's movements through chat commands.

An estimated 1.16 million people participated in the experiment, with a peak participation of 121,000 users controlling the hero simultaneously. It took the community 16 days of continuous play to beat the game. Twitch Plays Pokémon still exists today, with people all over the world playing various incarnations of the Pokémon video games.

The concept of socially controlling a game can be applied to a robot. Throughout the day on June 20, 2015 (that's this coming Saturday), I plan to have an EdiBot connected to Twitch for anyone to log into and control. You will not have to wait in any line; the robot parses commands as they come in, which could potentially result in erratic behaviors if more than a few people try to control the robot at once. It's all part of the fun. 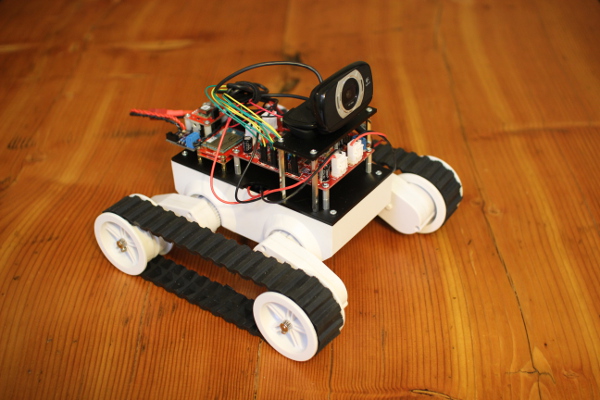 There are a few things to note:

Follow the prompts to create an account. You might have to check your email to verify your account. Once complete, go back to the Twitch Plays AVC Channel. You will be presented with a "live" video feed and a chat room on the right side. 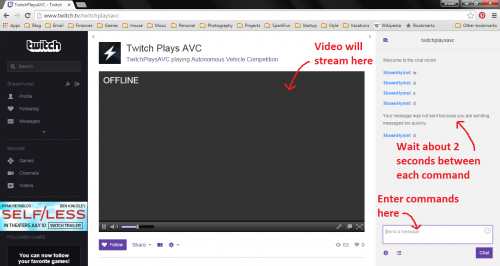 You can enter anything you want in the chat room, but the robot will respond to specific commands. Your entire message must consist of just one of the letters:

Note that there will be times when the robot will be streaming video but not respond to commands. For example, I plan to have EdiBot start streaming video just before a race and only accept commands once the race starts.

If you would like to be notified when a race is about to start, check my Twitter account throughout the day on Satuday: twitter.com/ShawnHymel. I plan to post updates and let everyone know when each heat is about to start. Let's see how far we can make it around the course!

Keep Calm and Chassis On