The term Creative Technologist has been hotly debated in the marketing world as of late, with some firms referring to it as "a critical function that helps to bring life to our design work," and others quick to label it "clichéd at best, and at worst, bordering on the meaningless." (The latter are a real cheery bunch, eh?) As with any such debate, both sides actually make some interesting points... But again, as with any such debate, the truth can be found anywhere but in the middle.

SparkFun's first Creative Technology hire was me in 2013. At the time I was a catalog assistant, writing the product descriptions that you rely on (for better or worse) when you're shopping our site! Whenever we had enough time, the Catalog Team (myself and Rob) would come up with a demonstration of the new product for the week and build it up. It made sense at the time for us to handle demos because we often got the first look at products that were going to be sold the next week. As time went on, I found myself spending more time on camera with more involved projects.

At some point this got the attention of advertising firms who were showing interest in the skillset that I had developed working for SparkFun. Around the same time, our award-winning talented videographer Gregg was exploring ways to shoot a new kind of promotional video for SparkFun. He wanted to create large, spectacular projects and interactive exhibits that looked really pretty on video, but no one at the company had time to devote to the project. So as it happened, while I was mulling over the idea of chasing a career as Creative Technologist, SparkFun found itself in need of a Creative Technologist and I moved to the Marketing Team!

Fast-forward through a few staff changes, re-organizations and project management strategies to 2015, and it's not just me cranking stuff out. Product demos, technical written content and interactive displays have become a large part of our brand, and this has allowed us to bring on two new technical members of the Marketing Team! If you're a regular on the site then you had seen them before their moves to marketing, so they're not new faces entirely, but they are new faces (and fresh perspectives) to the marketing family. Shawn Hymel, formerly of the Engineering Department, and Sarah Al-Mutlaq, previously our Sustainability Coordinator, have joined me in forming a Creative Technology team working full time to create fun and interesting technical content for the site, as well as for live events!

Today, I thought that I'd make some introductions and ask Shawn and Sarah to answer a few questions about exactly what they do and how they ended up doing it! In the interest of fairness, I guess I ought to answer as well... So without further ado, let's meet the Creative Technology team: 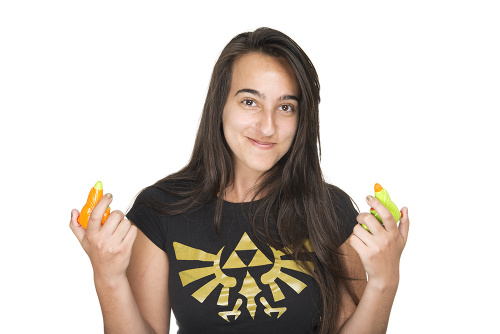 It just recently got changed to "Creative Content Engineer," but I haven't really been using that, so either that or "Creative Technologist"

Mostly making projects that showcase what SparkFun parts can do, videoing those projects, writing tutorials on how to do it, and uploading any code I wrote for it.

I really do like the IoT apartment projects since they are bigger projects, and they actually get all finished and nice and it feels like I'm building real things that can go in someone's house.

A Harry Potter Marauders Map phone app. Really want that to be a thing.

How did you end up as a Creative Technologist/Engineer?

I started working for SparkFun as their Sustainability Coordinator right after I graduated, and I was really interested in making sustainable projects and videoing them, so the Director of Marcomm approached me about the Creative Technologist position and I though it would be great, and it is. 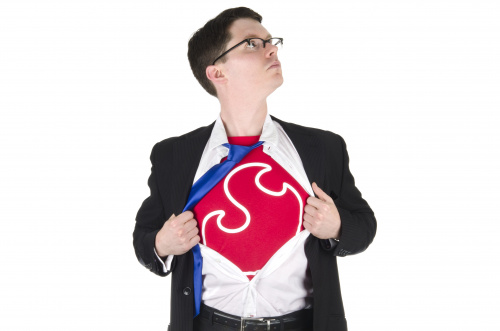 Shawn, curiously, not wearing a bowtie.

Officially, my title is "Creative Engineer," but my business card says "Engineering Superhero." I find that the latter is a better conversation starter.

One of the things I love about working on the Creative Tech team is that my day-to-day duties change all the time. One day, I might be writing code for the new version of BadgerHack, then creating a tutorial for a new product, and the next building an entire apartment set inside our office building.

As much as I like working on the Fellowship of the Things video series, I have to say my favorite project is BadgerHack. It is an example of experiential marketing where people can visit a SparkFun booth at an event, learn to solder, and walk away with something they can continue to hack on at home.

At work, I would really like to get a video driver working on the Edison and help create a larger LCD Edison Block, which would allow people to do this. I am working on a few projects at home, but I am not ready to discuss them yet. Let's just say they are classified.

How did you end up as a Creative Technologist/Engineer?

To go way back, I grew up playing video games, disassembling VCRs (yes, VCRs), and building Lego's. Studying engineering in college seemed like a natural fit. After my first job, I worked in the Engineering Department at SparkFun for a year and a half. During that time, I developed several products for our storefront, but I also helped create a few videos, which included exploding capacitors and licking 9V batteries. The Director of Marcomm approached the Director of Engineering and me to see if Marcomm could poach me to make content full time. I readily agreed. 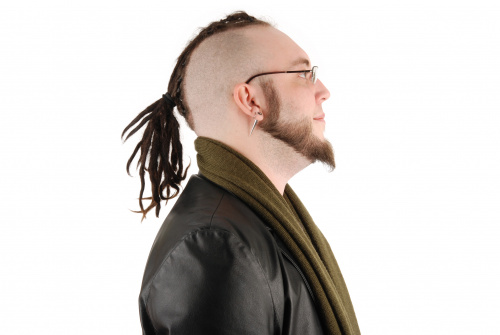 My official job title is Creative Technologist and I generally use that since it's gaining traction and seems to do a pretty good job of conveying what I do. That being said, I think my picture on the employee poster was labeled Pontiff of Creative Tech for a long time. And a friend of mine has suggested Chaotic Neutral Genius for my business cards.

My days are largely split between writing and building. My writing tasks usually include a tutorial, Getting Started guide or blog post. My building tasks are really anyone's guess. One week I might be hanging sheetrock, the next week I might be banging out Python code and the week after that? I might be teaching a robot to deal blackjack. But that's what I love about my job, I get to do a little bit of everything!

At the office, I'm really excited to build some wearable bio-logging stuff although I can't dedicate a lot of time to it right now. At home, I'm building a 2-stroke motorcycle that I'm pretty excited about.

I also made a New Year's resolution to go cyborg by 2016, so I need to get some piece of electronic hardware under my skin somewhere by January.

At work, I really want to build an open source electric vehicle. We'll see if that idea gets any... traction. (sorry)

Outside of work, I've been wanting to build a robot exosuit for years, and the recent Japan vs. USA giant robot fight craziness really brought that dream back with a vengeance.

I dropped out of business school to work for SparkFun. I started college by studying Comm Design and I got to take some great classes like Painting, Principles of Design and Typography but then I took a marketing class as part of the degree and I loved it. After taking Marketing 101, I switched my major to Business Management with a focus on small business and entrepreneurship. My introduction to electronics was from my dad, a mechanical engineer and maker, when I was really young. I went on to teach myself embedded development as part of an obsession with wearable computing. TL;DR: "Some College"

I'll admit that each time one of these awesome folks joined my team I was a little intimidated. Both of them are really talented and creative makers, not to mention genuinely good engineers. But it turns out that it's allowed us to create a lot more content much more quickly without anyone getting burned out. Also, we have different areas of specialization which makes it pretty easy to divide labor when we need to. At the end of the day, having a Creative Technology team has been a major upgrade and I look forward to cranking out bigger, better projects with these fine people for a long time.

If you have a question for any of the Creative Techs, leave us a comment!