SparkFun's module shows up in an FCC study on body sensor networks. We've also got a new speedometer tutorial and some new products.

Our friends at Nordic VLSI gave us a heads up that our nRF2401 breakout is being used in an FCC study. Near as I can figure, General Electric Healthcare (GEH) wants the FCC to open up the band from 2360MHz to 2390MHz for something called a 'Body Sensor Network' (BSN). GEH wants to snag a rather large slice of the spectrum pie and have it for themselves and their BSNs. Unfortunately this band overlaps with flight test telemetry systems and the Navy is a bit concerned. 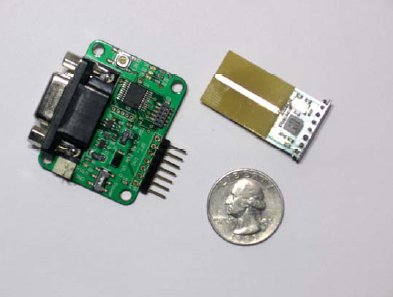 Johns Hopkins Applied Physics Labs ran the tests. They had to come up with a way to tell if a new BSN device operating in this 236-2390MHz band would interfere with flight test operations. Checkout the hack they did to push the 2.4GHz Nordics into the 2.3GHz band:

"To permit the Nordic chips to operate in the AMT band, the 16.00 MHz surface mount crystal was replaced by a 15.36 MHz crystal. This shifts the operational frequency range of the Nordic transceiver from 2400 – 2525 MHz to approximately 2300 – 2425 MHz. With no further hardware changes whatsoever, the prototypes can operate at any frequency within this 125 MHz band."

"The Figures also illustrate the manner in which two devices, one in transmit mode and one in receive mode, can communicate at a distance of two miles by connecting the receiver to a 15 foot diameter parabolic dish AMT receive antenna and low noise amplifier combination at Patuxent River..."


Where's that 15-ft parabolic when I need one?

Checkout Ryan's new tutorial on a Digital Speedometer. Turns out his car was indicating 5mph over what his actual speed was!

Product Update! The Arduino USB Board is now being shipped with ATMega328. The new Arduino USB board is still fully compatible with the Arduino IDE, contains twice as much memory, and uses a faster baud rate to upload sketches.

The Powerline Communication Modem is a transceiver module designed to send and receive data transparently over power lines. Includes headers that are compatible with XBee modules, as well as the two next items below. Wirelessly monitor your power hungry devices and decrease your carbon footprint!

In addition to adding XBee connectivity to the Powerline Communication Modem, you can easily add a RS232 interface....

The new XBee Explorer Serial allow for easy RS232 communication and programming to all of our XBee modules. The onboard barrel jack allows for higher current power supplies (compared to our USB Explorer) to be connected to satisfy the higher current draws from the XBee.

We now sell a 1 foot length cable for EM406 and EM401 GPS modules. Works well with our UAVv2 and Ardupilot systems.
View Comments (8)
Share
Use this URL to share: