Can You Escape Through Electronics?

Hundreds of patients who had contracted a mysterious virus were quarantined, but a security breach has allowed the disease to spread into society at large. It is now resulting in thousands of deaths per day!

You are an agent on a hazmat team that must retrieve blood samples stored in the now-abandoned hospital to be analyzed for a cure to save humanity. You must find the blood samples and get out as fast as possible before you become the disease's next victim!

This was the challenge posed by Hospital Escape, an interactive experience designed by Jack Frey, a May graduate from The College of New Jersey.

“I want to show people how technology can enhance a typically nondigital experience, such as an escape room, and to expose people to multiple forms of technology,” Frey said.

Frey transformed the lighting studio at his school into a hospital lab using a variety of set pieces and props. Players were first sent into the dark room with a flashlight and had to find a circuit breaker to turn on the lights. After solving a chemistry challenge, players had to look up the atomic number of elements that appeared on an OLED screen and enter those numbers into a keypad synced with a magnet lock. The Photon controlling the keypad would then communicate with the Photon controlling the PowerSwitch Tail II using Particle's publish and subscribe events. This would turn off the PowerSwitch Tail II, thus disabling the magnet and opening the cabinet containing a UV flashlight, which would then be used to solve a puzzle with invisible ink...and so on. 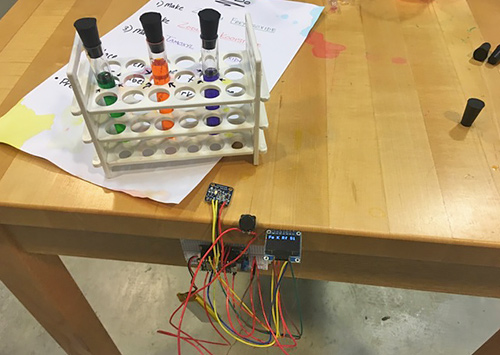 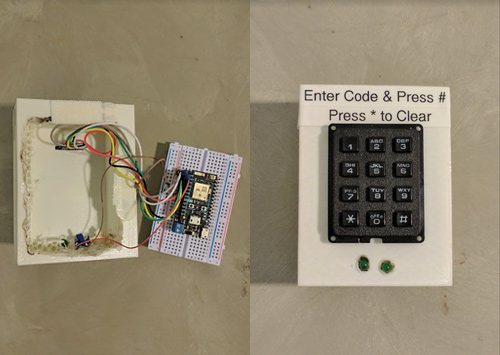 SparkFun donated the PowerSwitch Tail II and Particle Photons, along with Photon Wearable Shields and various buttons, switches and sensors. The custom web app was built using HTML/CSS, JavaScript, Bootstrap and Firebase. It also featured a basic web server made with Node.js, ParticleJS and the Firebase Admin SDK.

Each member of the hazmat team wore a vest that monitored how “infected” the player was becoming from exposure to the disease and displayed the player’s health in the web app on his or her phone. After prototyping with a SparkFun RedBoard, Frey moved on to using the Particle Photon and sewed a Wearable Shield into each vest. He installed an alarm consisting of a buzzer and an LED that turned red if the player’s health fell below 25 percent. When the alarm started beeping, the player had to press the “heal” button in the web app and stand still for 30 seconds in order to reset the alarm and cheat death.

If players avoided fatal contamination, they were faced with the final challenge of cracking the code to a lock on the refrigerator containing the blood samples.

“All the players had a great time, and every group was able to solve it even if they needed to request a couple hints,” said Frey, who watched the action in the escape room via a live feed. “Everyone was intrigued by and had a lot of questions about how all of the components in my escape room worked.” 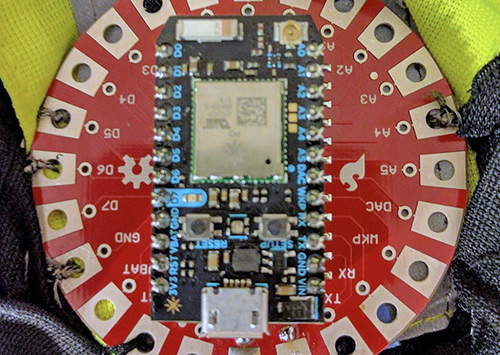 Creative Cabinetry With a Cause