What does an image of a flexible display and a monkey have to do with each other? 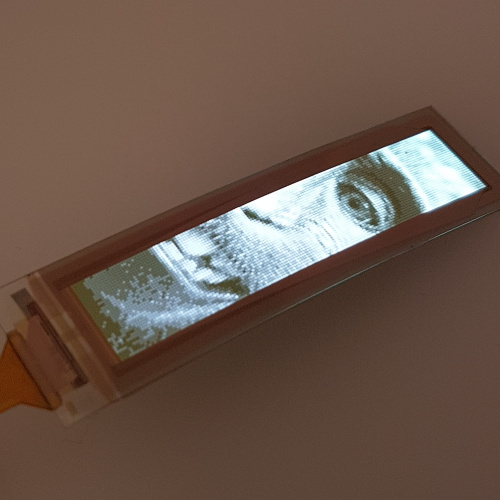 This product has gone red! Pick up the current version [here](https://www.sparkfun.com/products/14606). Pong on a coffee m…

It was a lot of work to get all the pieces to come together but we are very happy with the display. It’s incredibly crisp for a display that is mind-bendingly thin (0.5mm)!

But where did the example image come from?

I was looking for a good image that I could trim and be scaled down but still be recognizable. After a few minutes of searching I tried ‘monkey’ and the infamous monkey selfie appeared. I had never seen the image before but serendipitously I had recently heard a podcast (This American Life Episode 631) about the image! 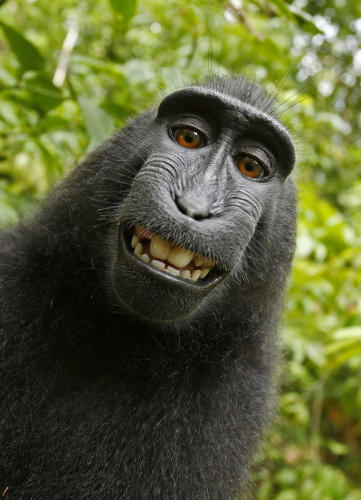 For those that don’t know, this image has caused a big stir because of copyright issues. Wikipedia claims that the image is not copyrighted by the photographer, David Slater, because the monkey pressed the button to take the photo. Since monkeys can not hold copyright Wikipedia believes it is in the public domain. Fascinating! You can obviously read more about it here and I recommend the podcast as well.

While I am a proponent of open source I certainly respect those with rights and have a soft spot in my heart for David who took (ok, set up) an amazing photo! So I wanted to be sure SparkFun didn’t impinge on David’s picture (regardless of how the law assigns the copyright). I mentioned this internal dilemma to my wife and she quickly pointed out that the example picture is a picture-of-a-picture. In the art world this is called ‘appropriation art’ and has been around for hundreds of years. As such, I actually get copyrights over the demo image. I can use the image of David’s image freely. The more you know!

What we couldn’t quite pin down is the code that represents the image on the flexible display. Can we post the code that represents the image (cropped and made grayscale)? We think so. David’s image had to be heavily modified in order to get it onto the display. Let’s say I didn’t change the image significantly. Does the raw binary values stored in an array represent something that is significantly modified enough that a new copyright is applied?

Either way, David deserves all the credit for taking a stunning photo.