After working hard to build the exterior of their energy-efficient model home, students at Colorado School of Mines start on the electrical system using SparkFun hardware.

When SparkFun launched its Community Partnership Program in January 2017, a team of students at Colorado School of Mines became one of our first partners. After designing and building the structure of their energy-efficient "tiny house," the team has begun to focus on how to use SparkFun technology to build a sensor network that will monitor temperature, humidity, solar panel output, air quality and more. Katie Schneider, an Engineering Physics major, has been a leading member of the team since the project began and shares their progress to date in this blog post.

In 2015, a group of Colorado School of Mines students decided to build a net-zero, solar-powered tiny house for research and education purposes. The endeavor began as a pilot project for the Solar Decathlon, an international competition where teams compete to build the most energy-efficient, innovative model houses. The 2017 competition was taking place in Denver, so while we likely wouldn’t be ready to actually compete, we thought, "What better way to prepare than to start small and build a mini version of the 1,000-square-foot house we ultimately hope to build?" 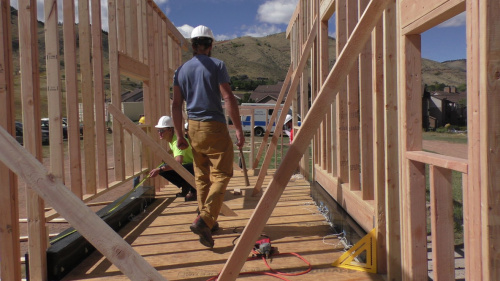 Matthew North (previous Construction Manager) walks through the tiny house during the initial framing in September, 2016. This was the first time most members on the team had ever done 2x4 stick-frame construction. Photo by Tim Ohno/Mines Tiny House Adviser

We are currently working on the interior of the tiny house and plan to finish this May. This phase of the design-build is welcome to the engineers among us, as it was admittedly quite a challenge to establish the exterior! A few team members did have some construction experience, but for the most part, none of us had ever used power tools before, let alone framed a house. We did have help, including from Renee Ereckson of Martin/Martin Consulting Engineers, who advised us on completing our initial building plans. But in terms of construction, our situation is unique because the house is so small (~220 square feet), and built on a trailer so it can be moved from site to site for educational demonstrations. An early challenge was deciding how to insulate the sub-floor; because it was raised from the ground and not on a foundation like a typical home, we needed a higher R-value on the floor to prevent the house from getting cold. 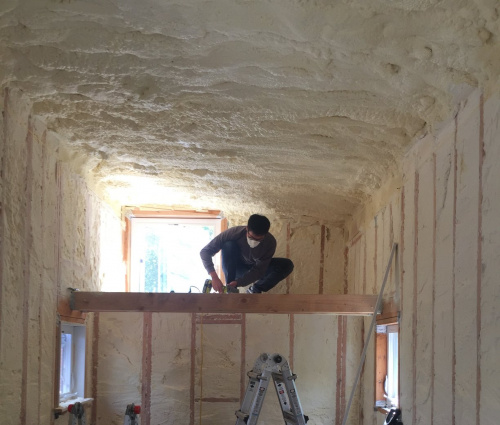 Plumbing systems member Sheng Zheng removes spray foam from the bedroom loft. This was necessary because it was over-sprayed by several inches, which sacrificed a lot of room in such a small space. Photo by Katie Schneider

As I mentioned previously, the team is eager to start on the interior design for many reasons. We come from different majors across our Mines campus, so where the learning curve during the framing/early construction phase was essentially equal across the board, now is the time when our individual strengths can shine! A team of Environmental Engineering majors is working on a living plant wall inside the house to contribute to indoor air quality. 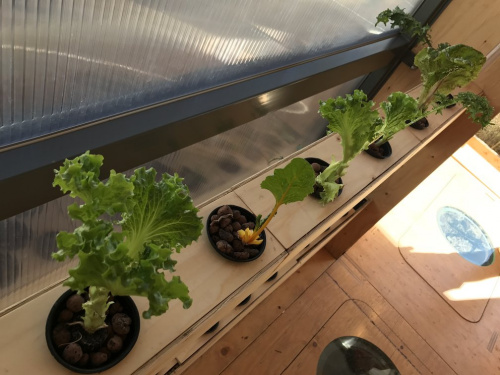 Some Civil Engineering students are designing our water system. With the tiny house being off-grid, we have a unique plumbing situation to work around and need to utilize methods like rain water collection, gray water usage and storage, etc. Finally, there are several Electrical Engineering majors figuring out how to integrate our unique AC and DC electrical system. As we are powering the house with six roof-mounted solar panels, we need to convert DC power to AC to run appliances. Our JLM EnergizrTM 100 battery storage unit will integrate this storage and conversion, but we ultimately will be designing a unique system. 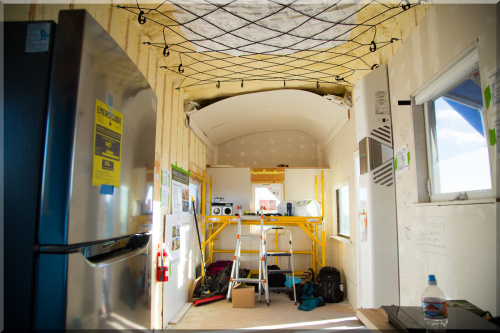 At the Solar Decathlon, we set up certain aspects of the tiny house as they will be in the future, including appliances (purchased with the help of a crowdfunding drive), the battery storage unit (shown at right) and phase change materials in the ceiling. We had originally designed a curved ceiling but have since changed it to be flat. Photo by Agata Bogucka/Colorado School of Mines

As an Engineering Physics major, my personal favorite part of the tiny house is our sensor network, which was possible thanks to a hardware donation by SparkFun. It has been a top priority since the beginning to build a “smart home” with the ability to monitor and control different aspects of the structure. In our attempt to build the most energy-efficient tiny house out there, we knew that monitoring temperature, indoor air quality (VOC and humidity levels) and solar gain would be major components in achieving this goal. So, fellow Physics major Tristan Debrunner and I set out to construct a sensor network with these and other capabilities. 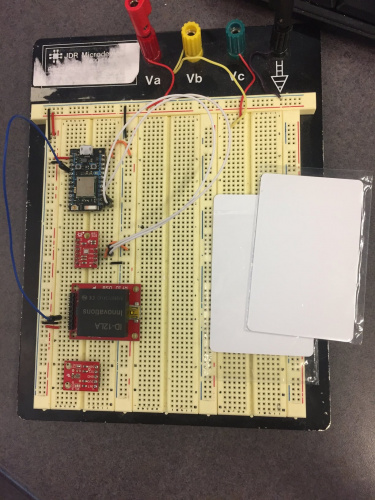 After the first week of sensor network design, we gained experience with the Photon and successfully wrote code for the atmospheric, luminosity and RFID sensors. Photo by Katie Schneider

First, we decided to use the SparkFun Particle Photon as the primary microcontroller instead of another Arduino style because of its WiFi integration. This allows us to monitor and control the tiny house remotely with the Particle Cloud software --- very helpful for our research! Further, there are other components already inside the house (such as the Energizr™ 100) that have WiFi capabilities, so we hope to tie all of these systems together. We started adding sensors one at a time and adopting new code to run them simultaneously --- first, the SparkFun BME280 Atmospheric Sensor to measure temperature, barometric pressure and percent humidity (connected to the Photon through I2C and communicated with an existing Arduino library). We hope to replace this with the new BME680 soon so we can also measure VOC. 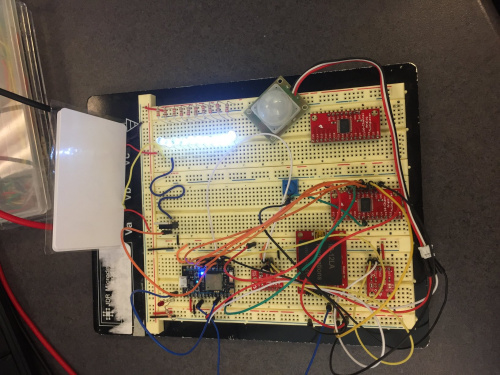 The final sensor network is contained on one breadboard, but can easily be taken apart and put on separate ones around the house. The bright line of LEDs served as an indicator for the motion sensor. Photo by Katie Schneider

Next, we added the SparkFun Luminosity Sensor – TSL2561 (I2C connection and existing code), which will measure the solar gain in the house at different points. We have eight windows in the tiny house and are curious to see how that impacts such a small space! 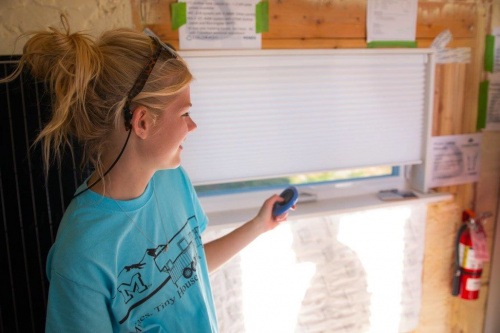 Katie Schneider (that's me) uses a PowerView Remote Control to open and close Hunter Douglas Duette honeycomb window shades. These wireless programmable remotes allow you to open blinds on a timer and control any number of them simultaneously. Photo by Agata Bogucka/Colorado School of Mines

We also added the SparkFun RFID Reader ID-12LA (UART connection), the SparkFun PIR Motion Sensor and the SparkFun Analog/Digital Multiplexer – CD74HC4067. The RFID reader was a fun find for us and can potentially be part of a security system where only ID cards known by the program will open a lock on the door (now a red LED lights up when a known tag is detected for proof of concept). The motion sensor will be incorporated into our lighting system. We can program our LEDs to turn on when motion is detected and turn off after a certain amount of time. Also for proof of concept, we had a line of 10 white LEDs light for three seconds when motion was detected. This was the most difficult piece of code for us. We added an interrupt that would publish a message to the Particle Cloud when motion was detected, but unfortunately found that it was impossible to publish to the Cloud in an interrupt service routine without crashing the Photon. By changing the code to instead turn on the LEDs, we eliminated the problem. Finally, we built many thermistors into the walls of the tiny house to track thermal characteristics throughout. This is why we needed the analog mux; we formed a voltage divider with a resistor and potentiometer (to represent the variable signal of a thermistor since this is not yet in the house) and successfully measured the output voltage at the analog pin in the middle of the divider. We had to think through the appropriate pin connections here for the right ADC functions, and we were successful!

We have not actually tested the sensor network in the tiny house yet, but we have code and circuits to start with. Our ultimate goal is to have Photons all around the house to measure specific values at different places (this network has everything on one board but can easily be separated). Be looking out for more results in the new year! 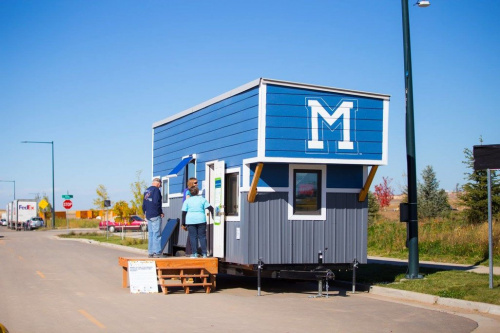 Mines Tiny House on site at the Solar Decathlon 2017. CSM Mechanical Engineering student Mali Glaister painted our signature Mines “M” on one of the lofts. Photo by Katie Schneider

This project is giving us a great knowledge base to carry into the Solar Decathlon 2020. We were fortunate enough to actually present our tiny house at the 2017 Solar Decathlon in October (not to compete, but simply to show off our work to the industry and interested community). We learned about and saw competition expectations, and gained confidence in our project and abilities. There was so much excitement about the house and great community reception --- many people are impressed and eager to see the project once it’s complete.

Our tiny house is a design-build --- meaning it was not fully designed before we started construction, and that design and construction are completed simultaneously. Learning as we go, facing challenges and working through them are what make this project so rewarding and beneficial to us. The same is true for the sensor network; we built one sensor at a time and continued to add to it with each success. And while our initial design is now complete, we know there will be changes when it is fully implemented into the house. But this is one of the beauties of the project. We have the freedom to shape our design to fit our visions as they constantly evolve and grow. 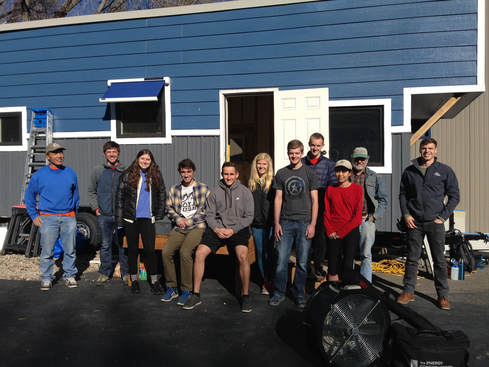 For anyone working on their own Arduino project, my single piece of advice would be to embrace this freedom! Let your creative juices flow with your design, and don’t be afraid to change your direction after you’ve already started. For more information and updates, please visit minestinyhouse.weebly.com.

Are you working on a project that advances sustainability and could benefit from SparkFun electronics? Apply to the Community Partnership Program, and you may be selected for a hardware donation!

Born and raised in Rio Rancho, New Mexico, Katie Schneider grew up loving to read, ski, hike and play in the mountains. She is currently a junior at Colorado School of Mines pursuing an Engineering Physics degree and loves going to a school where she can escape to the outdoors and be active on the weekends. She hopes to stay at Mines to complete a master's degree in Mechanical Engineering and then pursue a career in the aerospace industry. Katie is fascinated by flight and wants to explore the efficiency of rocket launches, airplane shapes and new discoveries that will develop over her lifetime!

A Look Back: What Were You Working On?

A Look Back: 15 Years of SparkFun and the Maker Movement