How to Make the Most of CES

A few tips and considerations to help you get the most out of a trip to the annual showcase.

If you've been a fan of the SparkFun blog for a while, you know I'm a big fan of CES. The idea of the consumer electronics world coming together to showcase their best and look for the next big thing is incredibly cool to me. Recently, though, folks seem unimpressed with what they're seeing at CES. While I admit it's not for everyone, I challenge the idea that there's nothing interesting there.

Like I said, it's not for everyone. Besides the fact it's an industry event (you need to be associated with a company or involved in consumer electronics to attend), there are plenty of off-putting aspects. It's crowded, held in Las Vegas (not everyone's favorite town), and the emphatic nature of the show can be too much at times. But if you can look past all that, I'm fairly confident you can find value in the show. 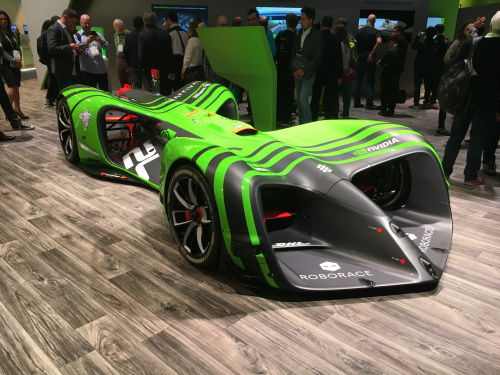 I could have spent hours asking someone about every small detail of the new Roborace cars.

You may already have questions. The first is probably, "Why does someone need tips on how to attend a trade show?" The simple answer involves the size of the show. CES takes up the better part of three convention centers and includes a large outdoor area. Being able to cover the entire show in the five days you get there usually means skimming the majority of the booths and not getting a great feel for the magic behind some of the products. I have no doubt this tactic is the cause of some of the articles expressing how unremarkable CES has become, so having a solid plan in place to reach the areas you want to reach and talk to the people you want to talk to is pretty important. I can't stress how bad winging it and poor planning can go (more on that later). A five-day trip to Las Vegas can come at a fairly steep price, so making sure you get the most out the trip is pretty pertinent. (For those working as an exhibitor, my only advice is to stay hydrated and wear comfortable shoes --- with the exception of the massage chair booth, there's an incredible lack of places to sit).

Plan out way in advance

Something to think about is that you're going up against 100,000+ people when it comes to things like accommodations and travel (luckily, ride-share companies regularly attend the show, which makes it a lot easier to travel). Consider what your goals for the show will be. Do you want to gauge interest in your own product? Look for potential partnerships? Figure out what's new and cutting-edge? Once you have your measure of success down, keep it in mind through the planning stages. An ancillary benefit to this: Everyone you talk to is going to ask what you're doing at the show, and having an elevator-type pitch for your reason for being there makes you sound a lot more put-together than a certain article author who tries to stammer his way through a paragraph of reasons. Ideally, give yourself two or three months' headway.

In all my time at CES, I've experienced exactly one instance where I was able to just swing by a booth and talk to the person I needed to talk to. More times than not, that person wasn't there, and the folks at the booth were unable to answer my questions. Having a meeting in place ensures you're not wasting your time and you're talking to the person who has the information you need. My advice is to observe the Golden Rule and value their time as much as your own. The other big thing to note is travel time between meetings --- unless you know all of your meetings are in the same hall, I wouldn't schedule them closer than one hour apart.

Another aspect that a scheduled meeting opens up is getting introduced to technology and products not on display. You'll hear a lot of people talk about CES consisting of what's on the show floor and what's not. There's plenty of tech that gets shown off in hotel rooms converted to conference rooms during the show; that's actually where I've gotten to see some of the coolest things I've seen at CES. However, these meetings are a bit harder to come by. Companies usually have an idea ahead of time regarding who they want to be talking to in these settings. 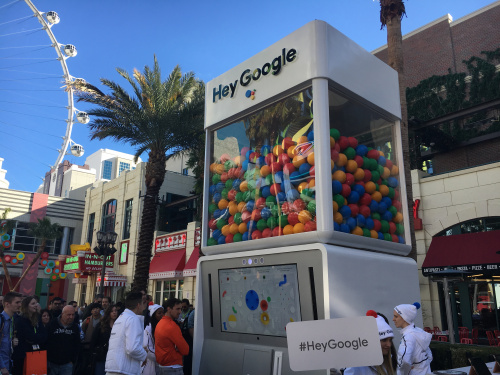 Google made sure you knew they have voice recognition AI for more than just their products with these giant gumball machines all over the show.

As you plan out your time there, you will have your meetings and booths you want to visit. But in between traveling from one to the next, you're going to run into things you find interesting that you didn't know about. Most booths have pamphlets, but there's always that thing that caught your interest that might not be noted in the pamphlet. I keep running notes on my phone, but in years past have also walked around with a small notebook. By the end of the show, you will be so overloaded with information you've accumulated that meetings start running together, and you'll find yourself staring at some of the pamphlets and information wondering why you were interested in this particular booth.

Pay attention to the news/blogs

One of the ways to stay informed about the show and figure out what to see next is to keep tabs on pertinent blogs and news sources during the show. It's surprisingly tough to find the stuff everyone will be talking about on your own. Journalists and bloggers get a media day ahead of time where companies put their products and showcases that are going to make the news in the spotlight. For example, I had some free time and saw LG's canyon-like display made of their curved 4k screens and would not have known it was there without reading about it on Twitter. The size of CES makes missing something wacky like this fairly easy.

I understand most of this stuff comes as common sense; my hope is to try to address some of the negative sentiments about the show. More and more, the show offers a reflection of our daily lives, and the less buy-in, the more it will become a self-fulfilling, boring event. I hear a lot of startups talk about how there's nothing there for them. They don't have the money to exhibit, which to them immediately disqualifies the event. But I disagree --- the contacts and information a small startup could gain from an attendant role can be pretty substantial. There's talk that the big tech companies used CES this year like an AR/VR supermarket, shopping for companies to work with or buy to build out their strategy around that tech. Small meetings can easily lead to introductions that could benefit your startup.

If you're on our site, most of the technology you see at CES will probably be old news to you, but it's the implementations that are cool, as well as seeing the true power of these technologies put to work to better our lives (well, most of the time). My ask is that if you're toying with the idea of attending you give CES the consideration critics aren't. Look beyond the spectacle of the next iteration of televisions and mobile phones, and use the show for its intended purpose: an industry resource full of insights and potential connections. But also, have some fun while you're there.

Panelizing the Same Design for Production