You know them from science fiction, but what will a real space mine look like?

If you're looking to buy (and have the cash to afford it), the most valuable real estate in the solar system may be at the south pole of our moon. A peculiarity of orbital mechanics has left the floors of several large craters in permanent shadow. These "cold traps," which are hundreds of degrees below zero, may be filled with the frozen remains of a billion years' worth of comet impacts. Here in the darkness could lie millions of tons of one of the most valuable materials in the solar system: water. And a motivated group of engineers, geologists, miners and businesspeople are making plans to go get it. 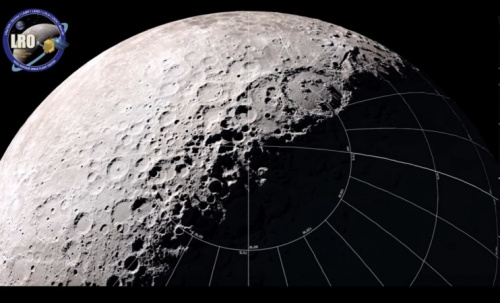 Space mines are a staple of science fiction, with famous names like Kessel, Rura Penthe and Arrakis. Looking at our current space program, it's hard to imagine how we'll get from where we are to the point where such massive infrastructure (as unsavory as the above examples are) is even possible. But we're rapidly entering a new phase of space exploration: government leadership, which has provided the federal-sized investment needed to develop the technologies that first got us to space, is giving way to commercial enterprise. The first fortunes made in space were from data, such as telecommunications and remote sensing. Now companies are working on the next wave: searching for actual physical resources (and the means to extract them) that they can ship back to Earth at a profit, or better yet, leave in space to develop entirely new off-world economies. 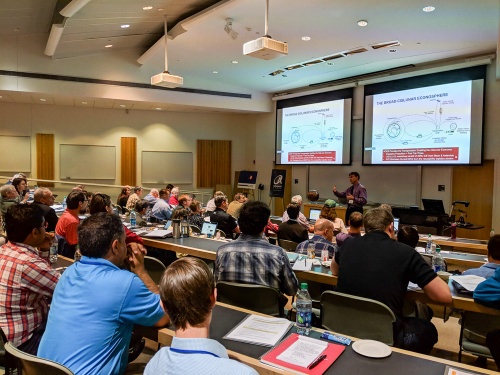 For the last nine years, a group of space-mining enthusiasts has been meeting at the Colorado School of Mines each year to share their research, ideas and prototype hardware at the Space Resources Roundtable (SRR) and Planetary & Terrestrial Mining Sciences Symposium (PTMSS). The attendees are experts in a wide variety of disciplines, and given the wildly speculative subject matter they're surprisingly pragmatic... For example, many of the conference talks revolve around business plans, and when speaker Mike Jude asked whether anyone would invest in a plan with a 55% chance of return on investment, nobody raised their hand. Even so, there's a palpable excitement that with decreasing costs from a new generation of launch providers, and signs of increasing government support, the vision they've been collectively working on for years may be closer to reality than ever before.

The business case for space mining hinges on the fact that launching anything from the ground to space is phenomenally expensive, and for the moment, at least, anything you need in space has to be brought up the hard way. For example, one of the most valuable things you can have in space is rocket fuel, since it allows you to move things around - the basis of commerce. On the Earth's surface, rocket fuel costs about $1 per kilogram, but by the time you've expended the enormous amount of energy it takes to lift it from the ground to low earth orbit (LEO), it costs the equivalent of $4,000/kg. And if you continue moving it all the way to the moon's surface, the price jumps to $35,000/kg. You can see why thus far, access to space has only been available to those with very deep pockets.

But if you could find a source of rocket fuel that's already in space, you would eliminate the enormous costs of lifting it out of Earth's gravity well, and this is where all that water at the lunar pole comes into play. If you separate water into hydrogen and oxygen - BAM! - you've got rocket fuel. Propellant will probably be the major initial product of lunar mining, but water is valuable in many other ways. Oxygen is obviously essential for eventual human habitation, but it is also a vital part of chemical reactions that can be used to extract resources from lunar soil, including aluminum and silicon. Conference attendee Robert Zubrin has famously spent years working on these chemical reactions for In-Situ Resource Utilization (ISRU). His company builds complex machines that ingest lunar or Martian resources and transform them into highly useful materials, almost like magic. 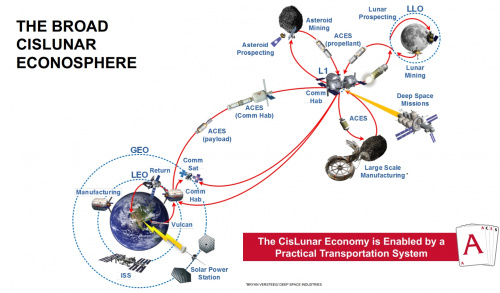 Thus far space mining has suffered from a chicken-and-egg problem: Nobody wants to develop infrastructure beyond low Earth orbit because the fuel is too expensive, and nobody wants to invest in a refinery because there are no customers yet. But in 2016, George Sowers, then chief scientist for the United Launch Alliance (ULA) and now a professor at the Colorado School of Mines, made a remarkable offer: ULA would commit to purchasing rocket propellant mined from the moon at various prices depending on where it can be delivered, from $500/kg on the lunar surface, to $3,000/kg in low Earth orbit.

What ULA gets out of this deal is a supply of fuel for a new spacecraft they're developing called the Advanced Cryogenic Evolved Stage, or ACES. Once launched, ACES vehicles would remain in space and serve as shuttles, hauling cargo between various orbits around the Earth and the moon. Unlike conventional spacecraft that typically rely on batteries or solar panels, ACES will be able to generate electrical power indefinitely from its own fuel using an internal-combustion engine. And of course, ACES will be able to be refueled in space as needed.

With a first-time-ever commodity buyer and a price, space mining professionals immediately went back to their business models to see if they would close. But before we get to that, what would a space mine actually look like? 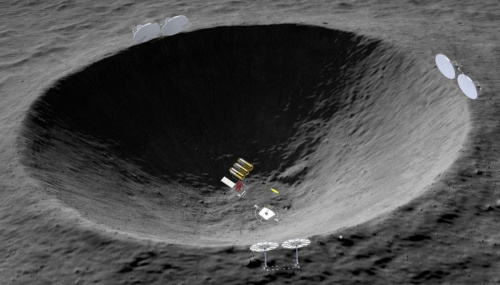 Doing anything in space is risky and expensive, so the KISS (Keep It Simple, Stupid) principle definitely applies. Rather than a full sci-fi approach involving heavy equipment, tunnels and alien prisoners, many of the current proposals are surprisingly low-tech. One such proposal formulated by professor Sowers and his students at the Colorado School of Mines involves placing clear plastic tents over small areas of water-rich lunar soil in the south polar craters, then using mirrors on the crater rim (which are in "eternal sunlight" in the same way the crater floors are in "eternal darkness") to reflect sunlight through the tent to heat the soil. The water trapped in the soil will sublimate to vapor in the low pressure, be trapped by the tent, and can then be pumped off, split into hydrogen and oxygen and liquefied for storage and transport. With a small amount of AI to account for the communications delay, these machines could easily be tele-operated ("grad students are cheap labor" notes Sowers), eliminating the need to send humans to the moon, at least at first.

So what would such a mine cost to put into operation? The thermal mine study above would require 29 metric tons of equipment to be delivered to the lunar surface at a cost of $2.5 billion dollars (assuming a completely commercial enterprise with no NASA assistance). The infrastructure would take five years to come on-line, and would then make $500 million per year in revenue. In 10 years the $2.5B investment will have been paid back, and the facility would begin operating in the black. Interestingly these numbers are comparable to terrestrial mines, but financing a terrestrial mine is much easier - businesspeople and investors are familiar with terrestrial risks, but space is a whole new ballgame. 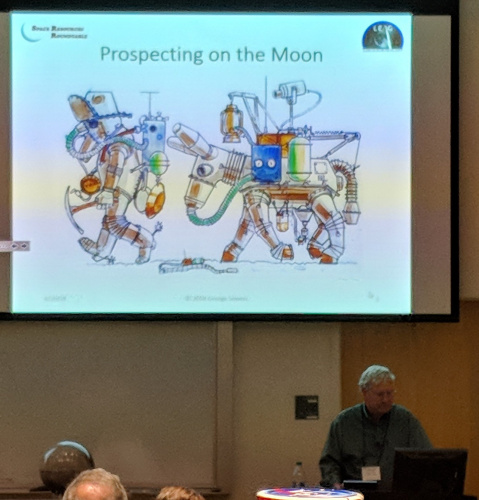 Everyone at this year's conference agreed that the next step toward lunar mining operations should be the same thing you'd do for a terrestrial mine: good old-fashioned prospecting. Scientists believe that there's water in the polar craters because lunar orbiting spacecraft have seen tantalizing hints of it, and in a very clever experiment, Tony Colaprete of the NASA Ames Research Center steered a spent rocket body into one of the polar craters, finding at least 5 percent water in the resulting cloud of debris. But nobody has directly touched lunar soil since the Apollo days, and we now believe those landings were in particularly dry areas.

Before someone writes a $2.5B check to a space mining concern, they're going to want to see some proof that they're digging in the right place, so it's going to take wheels-on-the-ground measurements of potential mining locations before the heavy equipment is called in. With this in mind, NASA was working on a rover called Lunar Resource Prospector specifically to measure lunar soil for water and other volatiles; unfortunately that mission was canceled due to budget cuts earlier this year. Conference members will not be dissuaded, however, and have their own back-up prospecting plans including rovers, low-altitude cubesats and instruments that could be flown on other missions. All it will take, as usual, is funding. In fact, one conference member astutely pointed out that we should stop saying things like, "We'll be on the surface of Mars in 10 years," and instead say, "We'll be on the surface of Mars in 10 billion dollars," as that is a much more accurate description of the barrier to doing these things. 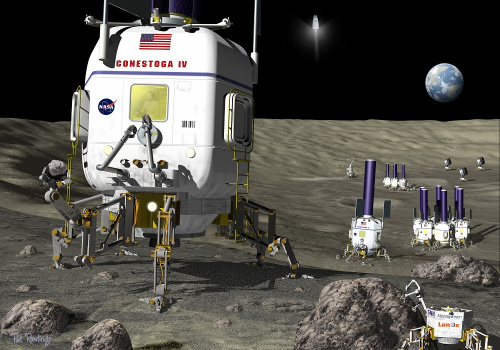 I could go on and on about the many other topics that are covered at these conferences in the areas of policy, technology, business and science, but I'll mention that much of this work is being done by small groups within NASA and at universities and companies around the world, so there's plenty of opportunity to get involved, especially if you're good at coming up with creative solutions to difficult problems. If you're a student, I'd encourage you to get involved in NASA's many programs and challenges, particularly their Robotics Mining Challenge, which we'll be covering in a future blog post.

SparkFun AVC 2018: Party, Prizes, and Your Chance to be Famous

Using Eagle Configuration Script Files: How to Make Eagle Yours