The concept is nothing new and has multiple times been proven to not work. But that's not stopping me as I set out to build a solar-powered fan to circulate warm air out of the car when parked for long periods of time.

Small disclaimer: As in-line with my luck, a cold front rolled into the region, so most of this isn't going to be nearly as spectacular or thought provoking as I intended it to be.

The problem is rather simple, yet complex. I park my car for upwards of eight hours a day in the direct sun provided by Colorado summers. While I use a sunshade, the ambient temperature in the car manages to be pretty high by the time I get back to my car in the evening. 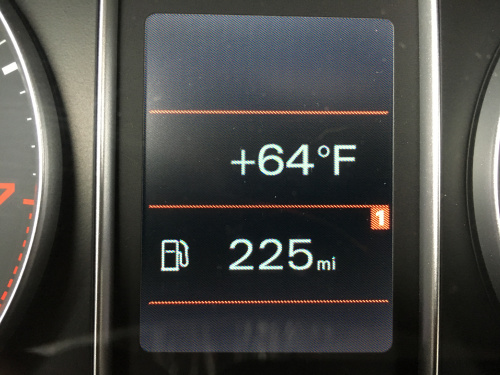 While a nice break from the heat, really not helping here.

This isn't too bad for me, but it's not my dog's favorite thing in the world. You're probably thinking, "Why not leave the windows down?" SparkFun is surrounded by fields full of bugs and dust. Add this to the out-of-nowhere rainstorms, and it's just easier in the long run to keep the windows up. So with the addition of our new, flexible solar cells, I've been thinking that it would be worth trying out a system where the hot air is expelled, and fresh, cooler air is introduced.

There are plenty of ready-made products that set out to accomplish the same thing. However, some YouTube searching will show consumer report after consumer report finding that these do not make a difference. My theory is that since these devices only move air out and do not replace it, the air replacing the displaced air is coming from the climate control system, which when parked and off can only provide warm air. By adding a fan that introduces air from outside the car, my hope is that it will provide somewhat cooler air. It's a long shot that it will work, but why not give it a try? 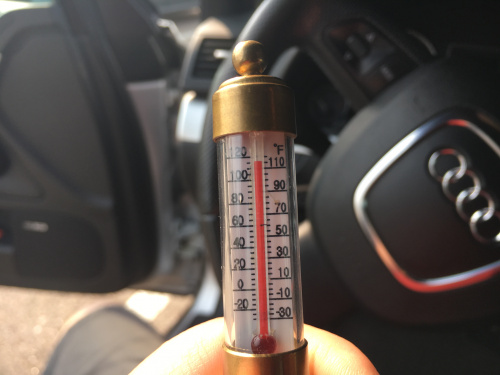 It seems my novelty thermometer is pretty accurate as well.

The first aspect I needed to figure out is where it would be mounted. Luckily, my fancy 2007 car has a sunroof. By mounting it on the sunroof, it provides a central location at around the highest point of the cabin. In addition, it provides a good spot for the solar array to rest. The bad side of this is that the fan introducing new, cooler air will be pulling from the area right over where the sun will be baking, which could potentially end up just introducing more hot air.

With a lot of potential unknowns, I decided to take advantage of working on top of the SparkFun warehouse and start testing things out. Due to the price of the flexible solar panel I'm using, I want to keep the BOM as small as possible. Plus, there's no reason for this to be incredibly intricate. Yes, I can add a battery and an MPPT tracker to keep the power to the fans constant, but I have serious doubts whether that extra amount of air movement would justify the additional parts.

The original test is set up with two fans connected with alligator clip leads to the panel mentioned above. Following some of the best advice I've ever gotten, I start simple, with the fans mounted on a piece of cardboard. Unfortunately the fans I'm using aren't the best fit, but there are ways to fix this should I see the evidence needed to move forward. 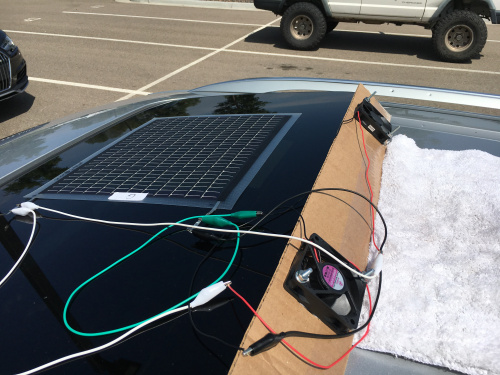 Not my greatest work, but it got the job done.

Today was a bit on the cool side, but the sun was completely unobstructed this afternoon. I took a reading from one of the hot days late last week, which was around 120 Fahrenheit with the sunroof open. Today started off a bit cooler, but with the sun out now, it's climbing fast. I took another baseline reading with the sunroof open and it measured 95 degrees Fahrenheit. After setting up the fans, I could immediately feel the hot air being expelled from the one fan. The other, which has the task of moving cooler air into the cabin, was a bit less successful due to the angle of the fans (I should have used smaller fans). At this point I wasn't sure if this was going to work. I was a bit upset as my first reading 30 minutes in had climbed to around 110 Fahrenheit. However, since then it has seemed to stabilize and hold between 105-108 degrees Fahrenheit despite the temperature continuing to climb.

So while this seems to be pretty successful in holding the temperature below what it would normally climb to, it seems the effects thus far have been marginal. I didn't expect anything substantial, but was hoping for more, mainly due to my next dilemma: does opening the windows when I start the car negate the work done here? The test this afternoon found the temperature dropped about 10 degrees within the first five minutes of the windows being down while sitting in the parking lot. I forgot to take a reading for this situation when I measured the temperatures without the fans, but would imagine a similar case. One aspect that did catch me off guard was the air coming through the vents seemed much cooler then normal.

This leads me to my ask from you guys: What do you think? How would you proceed with this? Is the difference worth exploring if a next increment in the design process could yield better results? Is there a different path you might have taken? Or do you feel I'm on a fool's errand?