Follow along as I attempt to build a ceramic 3D printer using OS plans I found online.

Well friends, it’s been a minute since my last ceramic printer update. Today we’re going to continue on the extremely slow journey. Before we jump in, let's do a quick recap of where we left off. Feel free to also catch up on your own by checking out parts I, II, and III.

As a reminder, this project is based on Jonathan Keep’s OS Delta Ceramic 3D printer, and his documentation has been the main source of guidance as I move through this build. Last we spoke, I had completed the basic structure and was beginning to making things move. First and foremost, I needed to figure out how to make my own linear bearing attachments, which are circled in red below. Keep claims to have developed a custom tool to create that part, without much more information about it, so I knew I was pretty much on my own figuring this out. 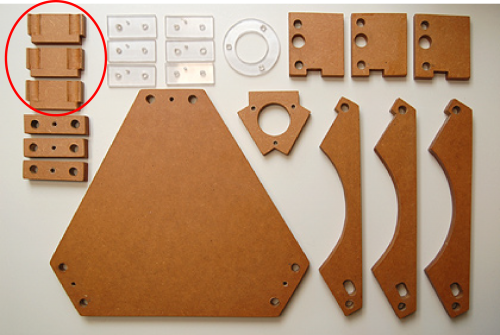 Given that I didn't have access to Keep's tools, I decided to 3D model and print this part, which is straightforward enough. 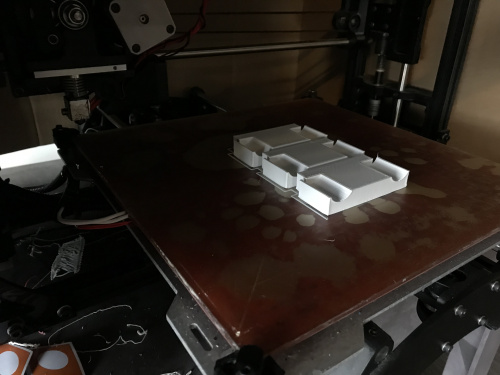 From here I needed to attach those fresh prints to the bearings, as well as to the belt for movement. I completely forgot to consider this in my model, so I drilled some holes in the prints to accommodate my zip ties. 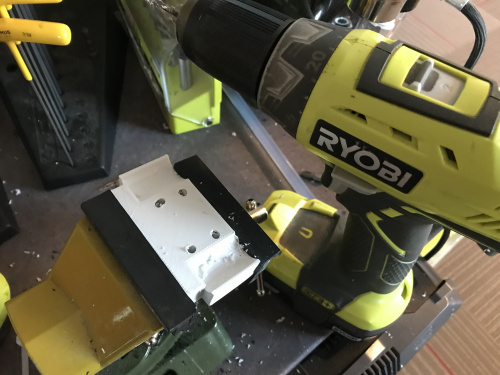 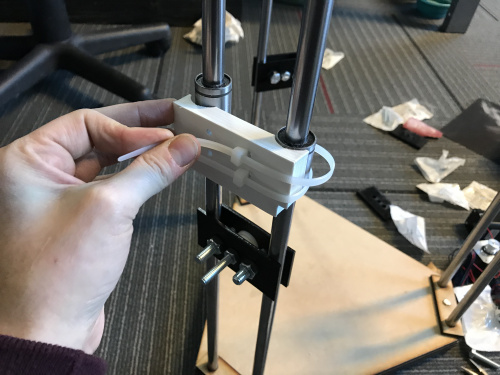 That worked well, and it was time to attach the belt. I realized that my belt is not already in a loop, and I had to find a way to not only clamp it into a loop, but also attach it to my linear bearings to create the movement I need. The solution I attempted, a 3D printed belt clamp, did not work very well. The grip on my belt was not strong enough, and it was awkward to attach two 3D-printed parts to each other manually. 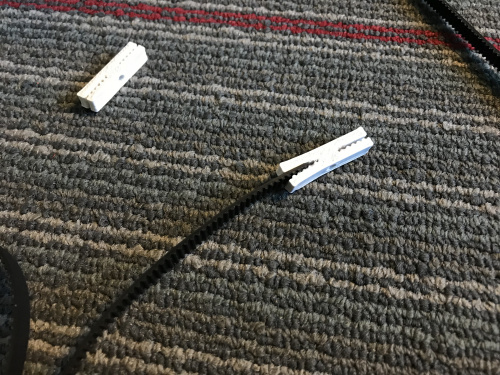 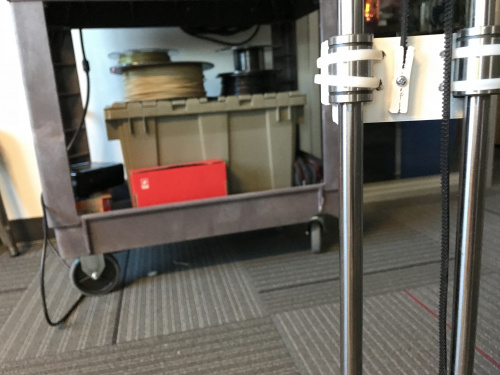 That about brings us up to speed. In catching myself up on the project, I took a look at my 3D-printed parts, which I both drilled through and screwed together, and decided that my best bet is probably to re-model and re-print that part with more consideration to its function. Time be damned!

The beauty of 3D printing is that you can make a truly customized part; there’s really no need to start drilling holes or attaching parts together unless you are working against a deadline and literally do not have the time, which I am not. So it was back to the Tinkercad board.

I decided I would model my belt clamp directly on the linear bearings attachment, eliminating the need to connect to parts together manually. I went to Thingiverse for some inspiration and was pleased to find that there are tons of GT2 belt clamps available for download, and the one I was using was not the only option. I found this really nifty square clamp and printed it out to test its strength. 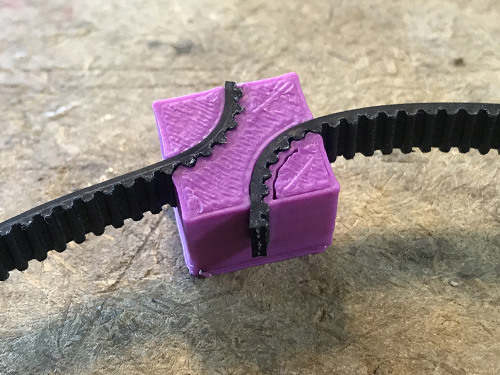 It proved to be a much more effective clamp than the one I was working with previously. With this knowledge, I decided to just pop that clamp on to my linear bearing attachment, and then add some holes for my zip ties as seen in the image below. 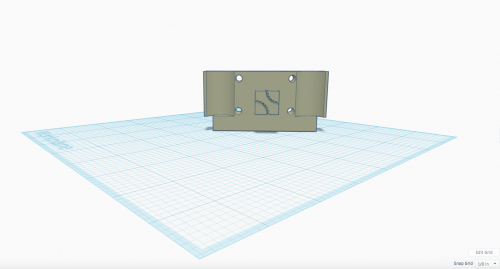 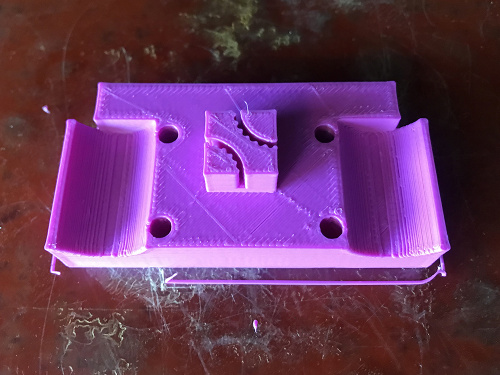 I was quite pleased with this because it solved three problems:
1. I now have room for zip ties; no need to drill through this print.
2. I now have a belt clamp, which will effectively turn my GT2 belt into a loop.
3. The clamp also effectively attached the belt to the linear bearings, allowing for movement.

In conclusion, I killed three birds with one print. Go me.

Previously, I attached these guys to the linear bearings right away. However, in reviewing Keep’s video, I noticed that before he zip-tied these into place on the linear bearings, he connected them via rods to the extruder holder in order to moved it using the belts on the motors (check out 2:21 in the video linked above). This led me to start looking at the base of my extruder holder more closely so that I could prepare it for the rods.

My initial attempt when I made the structure was cut out of two pieces of MDF, which I sandwiched together with wood glue. Upon further inspection, I noticed that Keep uses a second fabricated part to hold the extruder in place – a ring-like object, connected to the base of the holder via standoffs. 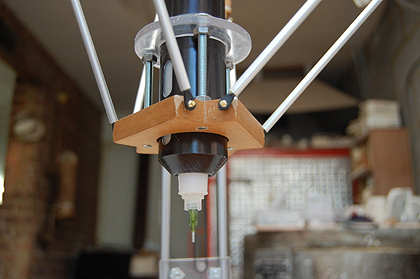 This is what I overlooked when I made my initial cuts, and I ran into a problem right away. My MDF was too thick for my longest standoff screws. I realized that I should just make these parts again to my own specs and decided to 3D print these parts too. 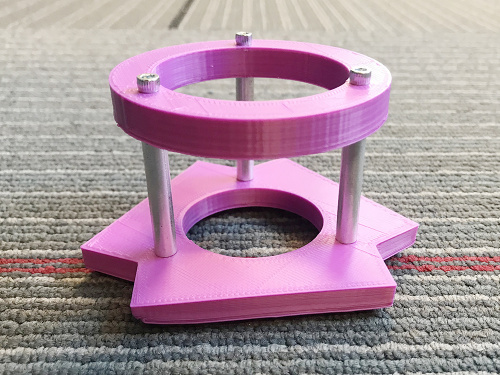 This worked really well. I was able to put together a little holder than keeps my extruder in position without wobbling, which I assume is the desired affect. 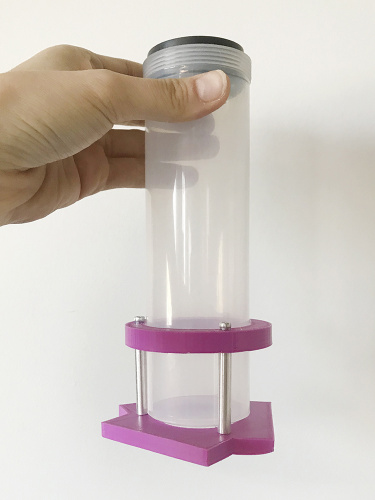 Now I can begin to work out connecting the rods. This is where I got stuck. In Keep's video, he uses small nails, making a secure but flexible connection between rod and MDF. Nails probably make a heck of a lot more sense if you are using MDF, but I printed my parts and I am concerned that the printed plastic won’t work quite the same way. Now I am pondering a way to move forward.

On one hand I feel like I should make the base of the extruder holder in a thinner MDF and drop the print, but that doesn’t solve how I’ll manage the linear bearing attachments, for which I am pretty committed to my 3D printed parts. Therefore, my next step will be to figure out how exactly I plan to work around that. I’d love to hear any suggestions you may have for this predicament in the comments below!

Before I close this post I want to mention that taking on a project well outside of my comfort zone has been a truly interesting experience. While I knew this would be a bigger project for me from the get go, I think I underestimated just how slowly I need to move through each step to figure out how to make this beast a reality. In the case of this project, I don’t have an intuitive feel about how to solve the problems I run into, but I am figuring it out as I go and learning so much along the way. I appreciate you sticking with me for the ride!