Celebrating the centennial landmark in prototyping and development!

July 17th was a big day for SparkFun - we released our 100th and 101st Qwiic-capable boards! This centennial achievement has been in the works for the last three years. Nate developed the first Qwiic boards for SparkX in April 2017, and since then it has accelerated and evolved into the massively popular ecosystem that it is today. 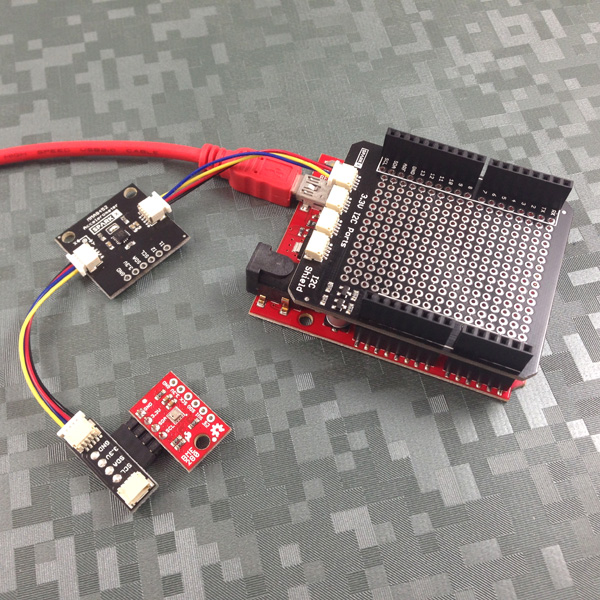 Some of the first Qwiic boards including the Qwiic Shield for Arduino, MMA8452Q Accelerometer, and Qwiic Adapter.

If you are unfamiliar, the SparkFun Qwiic Connect System is an ecosystem of I2C sensors, actuators, shields, cables and more, that make prototyping faster and less prone to error. All Qwiic-enabled boards use a common 1 mm pitch, 4-pin JST connector. This reduces the amount of required PCB space, and polarized connections mean you can’t hook it up wrong. The Qwiic Connect System is designed to keep your projects moving.

You can control Qwiic sensors and accessory boards with Arduino, Raspberry Pi, NVIDIA Jetson Nano, RISC-V, micro:bit and more. Qwiic boards can operate via WiFi and Bluetooth with ESP32 or XBee. With Qwiic you can daisy-chain multiple boards together to form new circuits all without a single point of soldering. Pretty much every new board SparkFun creates has a Qwiic connector on it (provided that it has I2C capabilities).

We are very proud of reaching 101 unique boards in the Qwiic ecosystem (and that doesn't even include the 15 kits and 10 cable/connector options), and we'll keep producing Qwiic boards, kits, and accessories (new ones this week!), as well as helping other businesses and partners create their own Qwiic boards!

What have you created with Qwiic? Tell us about the projects you've made with Qwiic in the comments below. Here's to the next 100 Qwiic boards!

So you want to talk about RFID