The Return to Shenzhen - Part 2

After checking out a handful of factories on the geek tour in 2009, it was time for me to return to China to visit some of the factories that make goods for SparkFun. I've got far too many pictures and videos for one post so I'm going to break them up into three posts. This is the 2nd post - you can read Part 1 over here and Part 3 over here.

We've done an astronomical amount of business over email. We email a supplier, request 500pcs of something, wire the funds, and the goods show up 6 weeks later. Multiply by a couple years and we've sent thousands of dollars all over the world. We never talk on the phone, and I've never met the majority of folks who supply us with products like cables, LEDs, tools, etc. The purpose of the trip was to meet face to face with a small fraction of vendors located in China near Shenzhen.

Ok, that's a lie - half the trip was about meeting vendors, the other half was about geeking out and seeing how neat stuff is made.

On our 4th and 5th days, Louis and I toured a soldering iron factory, a clamshell factory, and a lithium polymer battery factory. 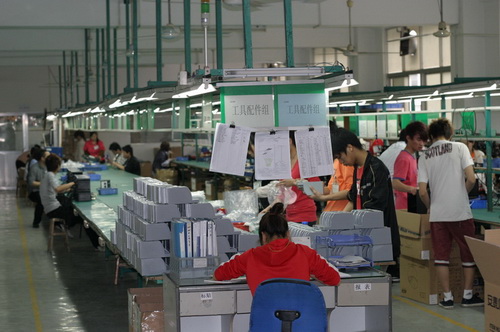 Located in Shenzhen, Atten makes the SparkFun soldering iron and we've been very impressed with the quality. Checking out Atten was great! 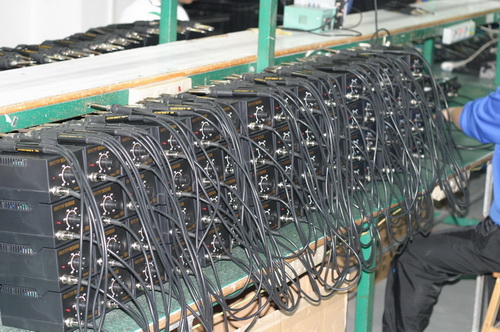 Testing massive amounts of soldering irons. Atten employs about 600 employees and can build about 150 irons per hour! 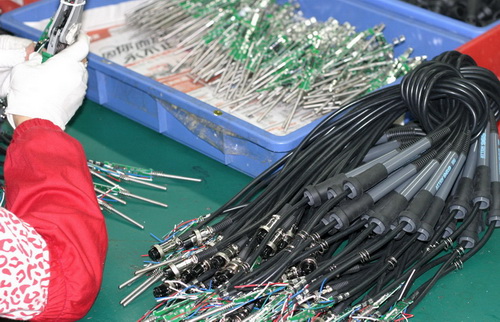 The assembly of the iron handle. 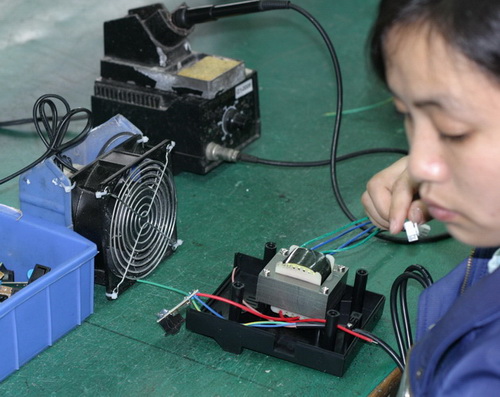 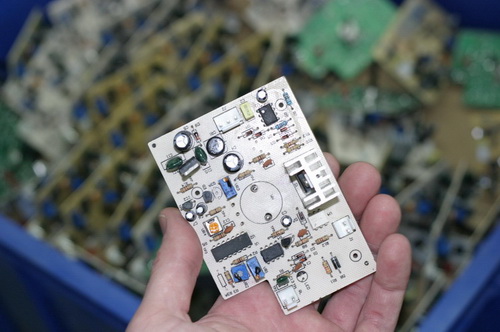 This was one of the control boards for an unknown model (probably not the one we carry). These PTH electronics are built very similarly to the other factories we visited. Lots of through hole components on a 1-sided board soldered with dip soldering (not Dual Inline Package, but actually dipping of a board into a solder pot).

I was pleased to see them using connectors instead of soldering directly to cables and boards. This allows for faster assembly and easier maintenance and repair of units. 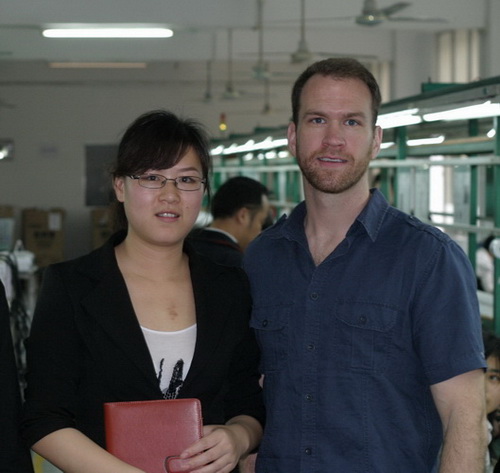 Myself and Iris, our tour guide. 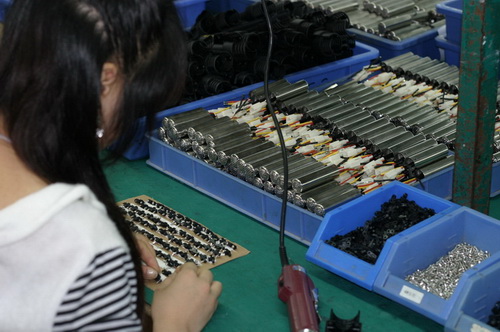 Atten also builds hot-air rework units. Above you can see the assembly of the nozzle elements that the air passes through to heat up. 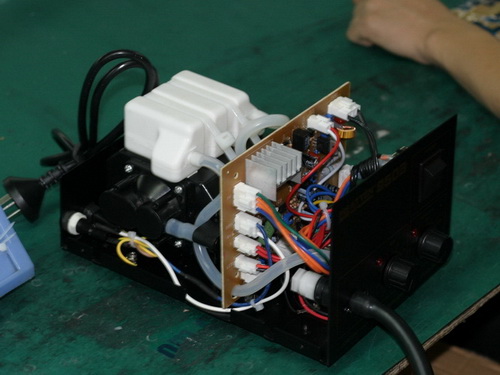 Check that out! It's the air pump as well as the control electronics for the heating element. 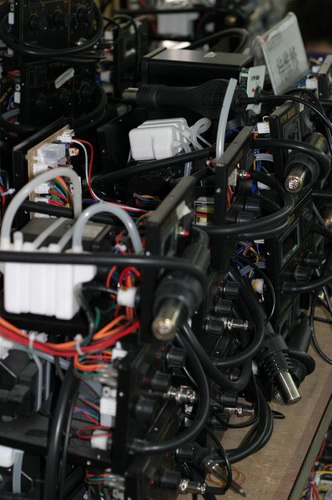 They build a lot of rework stations! 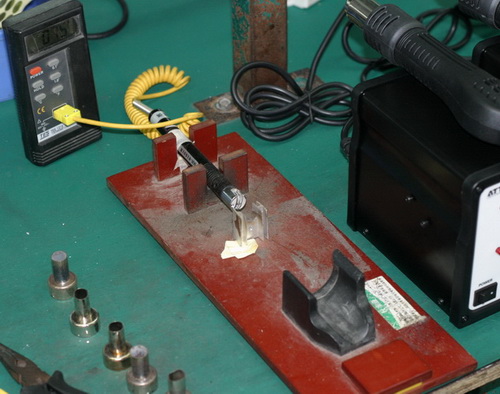 The test jig is very simple. They place the heat gun into the holder where the hot-air blows across the thermal probe (shown). The correct temp levels are checked and the unit is moved on.

A video from the floor of the Atten assembly floor. Very clean, very efficient, and well-run. 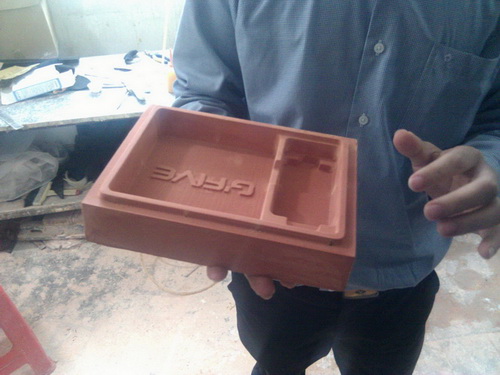 Our next stop was at the vacuum molded plastic facility. Vacuum plastic is also known as 'clamshells'. In the past 12 months SparkFun has started to 'retail package' some of our products utilizing this type of clamshell packaging. 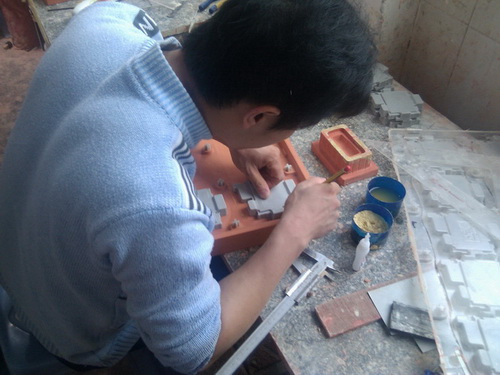 Vacuum molded plastic is completely different from injection molded plastic (an example of an injection molded product is here). Because clamshells generally need less precision than injected plastic, the preliminary molds are made of plaster. Above a gentleman uses calipers and hand tools to create the structures that will end up as cavities when the plastic is pulled across it. 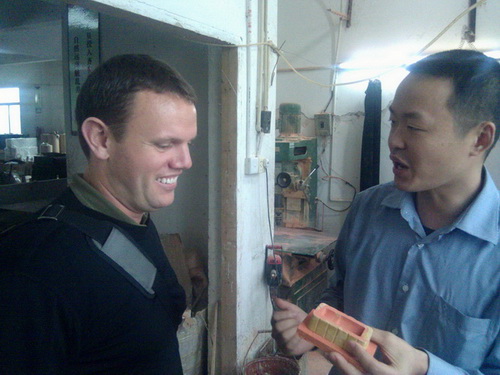 Louis and Ken discussing how molds are made. 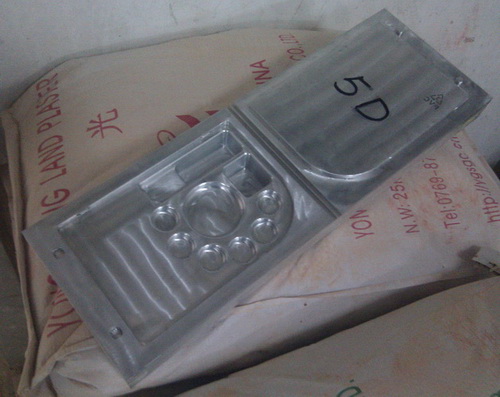 For more precise clamshell parts, aluminum is CNC'd. CNC'ing takes longer than manipulating plaster, but is easier to create if the original design is modeled in CAD rather than rough drawings. Note the many circles built into this mold. This is a mold for SparkFun's upcoming retail kit for LilyPad. 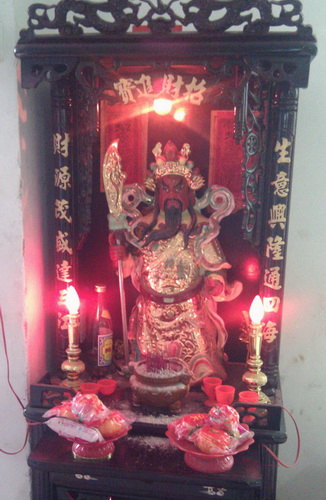 A very cool shrine located on the production floor. Can anyone identify the deity or the writing? 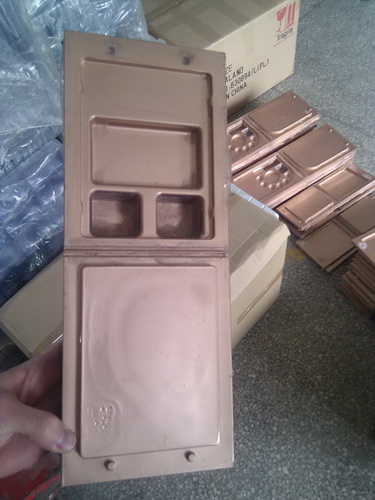 This is another SparkFun clamshell mold - in copper! This is mold known to us as "1AR" and will hold larger items (hence the deeper wells. You can see even more of our molds in the background: the same LilyPad shell (shown above in aluminum) and one for our generic parts clamshells.

The process goes like this: the original master mold is made of plaster or aluminum. Then a negative is made from this master mold. Then multiple positive molds are made of the negative mold, in copper. Why copper? Because it stands up well to the vacuum mold process while being lower cost than aluminum, easy to cast (lower temperature than aluminum or other metals), easier to modify (copper is malleable), and easy to recycle. 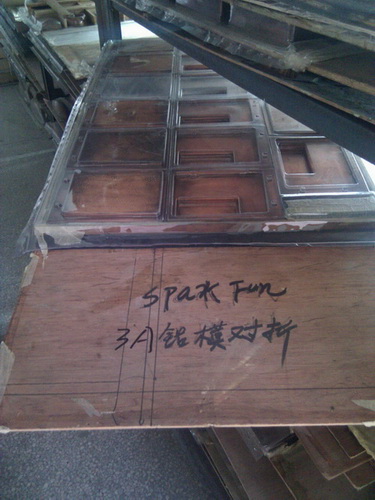 At the top of the picture you can get a sense for the width of the raw plastic sheet. The copper molds are then 'panelized' into an array to reduce waste. Multiple copies of the same clamshell are then vacuum formed (created) at the same time.

Here's the vacuum forming machine in action. The machine pulls in a new piece of plastic from a continuous roll. The plastic is sucked against the array of hot molds - thus making a whole lot of copies of the same piece. The mold is then switched off and compressed air is used to cool the plastic down. The mold is then pulled away from the (now cooled) plastic. The process then repeats. Amazing stuff. 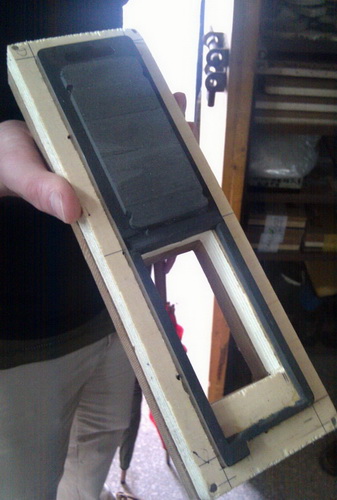 The final step of the clamshell process is 'depanelization' or cutting the sheet apart. Every design therefore has to have a custom blade created to match the outline of the clamshell. Above, you can see one such cutting tool. The blade is anchored to the wood. Black foam is implanted around the blade. When used, this cutter is aligned to the plastic sheet by hand and a large press comes down on the frame of the blade. The foam pushes back exposing the blade and cutting through the plastic. It may sound a bit wacky but this is a very common technique for cutting many things including vinyl and fabrics. 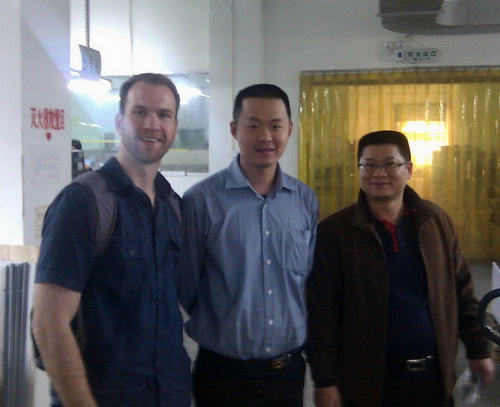 Myself, Ken, and Perry at the factory. 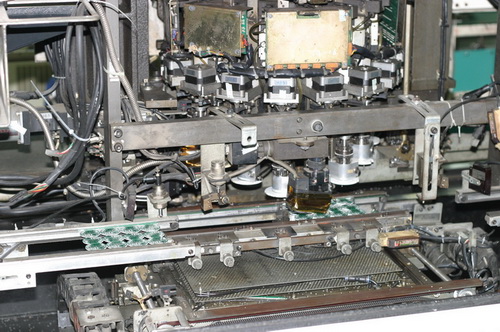 The following day Louis and I took a tour of a lithium polymer or LiPo battery making facility. The most important part of any LiPo pack is the safety circuit. All our packs come with a circuit that protects against short circuit, over voltage, and under voltage. We got to see two very impressive Gatling gun type pick and place machines.

I apologize for the loudness of the video, but it gives you a sense of just how massive and noisy these machines were. MANY components are slapped onto a panel then the panel is advanced out of the machine. Watch the video a couple times. This machine is probably 50 to 100 times faster than our current pick and place machine. 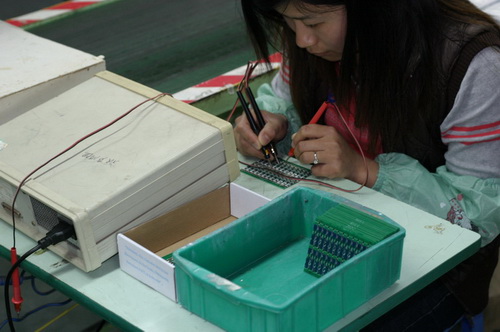 Once the safety circuits boards are populated they are tested. 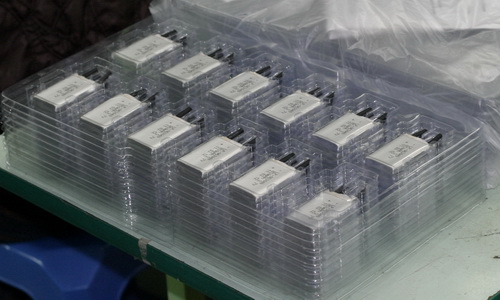 Here are the raw LiPo cells - ready for soldering. 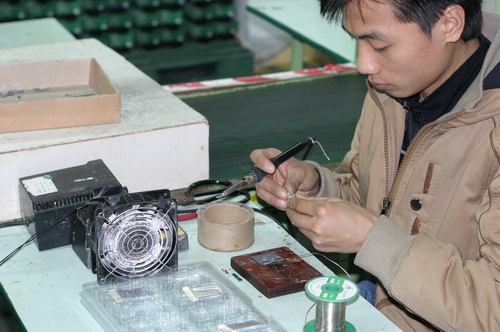 The safety circuit is soldered on. 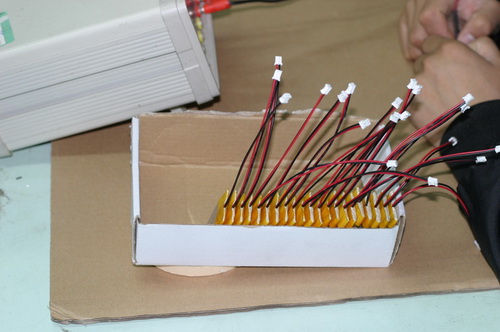 Wires are attached and the entire safety circuit is wrapped in high-temperature (kind of like Kapton) tape to electrically isolate the circuit. 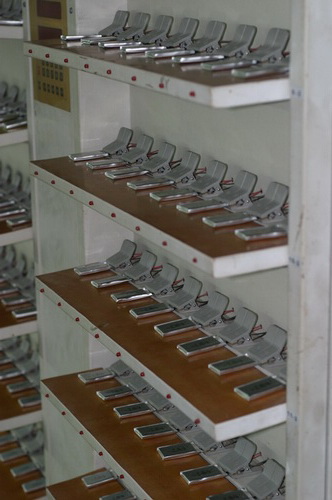 What I didn't realize is that every single cell is tested. Above, you will see a large bank of clips that temporarily connect to the anode and cathode tabs on the bare LiPo cell. Every cell must be charged, then discharged, then charged again. 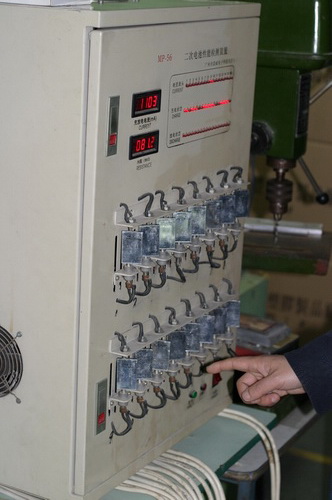 These are square cells. Every cell is monitored during these charge/discharge/charge cycles. If the cell is not taking enough charge, or the discharge curve is inadequate (internal resistance is too high or low), then the cell is recycled. Every cell! That's hundreds and thousands of cells tested every day! We test every single device we build at SparkFun but we hammer on test procedures until they are a few seconds long. These cells require multiple hours to test, therefore the factory dedicated entire floors to testing banks. It was a huge operation. 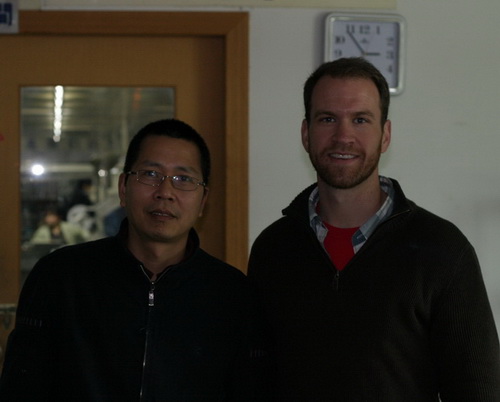 Here is Frank, the owner of the LiPo battery factory and myself. 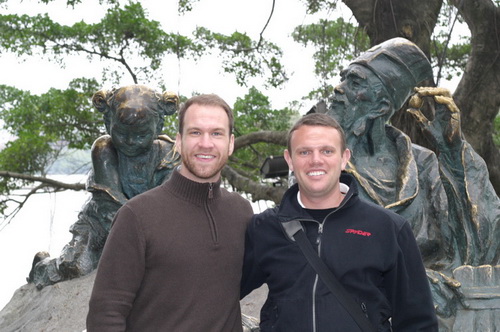 Frank was nice enough to take us to the park and show us a local temple. If you think you know a language try interpreting poetry. On the base of this statue and throughout the park, Louis and Frank were reading Chinese and interpreting the characters and the meaning. It was pretty phenomenal just how complex Chinese can be, and how well Louis and Frank knew two languages. It was a great couple days!

Be sure to checkout Part 1 and Part 3 as well!

The Easiest Contest Ever