A couple of us SparkFun folks made it out to Maker Faire Detroit! Here's some highlights from the experience.

Ahoy Makers! July 31 and August 1 was Maker Faire Detroit in Dearborn, MI. Oh what fun it was. Like any Maker Faire it was filled with all manner of inspiring sights, stimulating sounds, and searing heat from random bursts of flame.

Unlike other fairs I've attended, however, Detroit's most distinguishing feature was undoubtedly the Henry Ford Museum. While half the fair was spread outside under tents and in the wide open the other half was mixed among the interweaving exhibits of industrial machinery and Americana that makes the Henry Ford such a rich destination. I had the distinct pleasure of watching speakers on the live stage beneath the belly of a colossal DC-3 or turning on my heel from the open source biology table to see the limo in which JFK was shot. One couldn't ask for a more colorful backdrop.

Below is a collection of images from the two-day adventure around the fair. Some are mine and others were taken by Todd, a SparkFun Developer and Michigan native who joined me to explore the event. 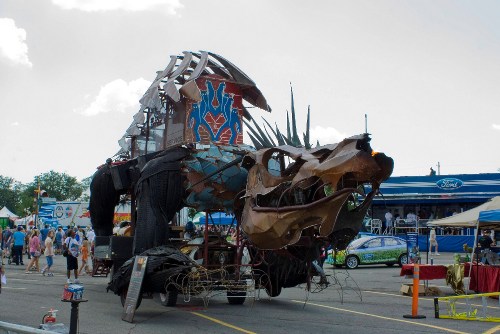 This behemoth dragon sculpture rested in the dead center of the fairgrounds.  Children climbed inside and flames shot out of its nose. The former may have been in control of the latter. 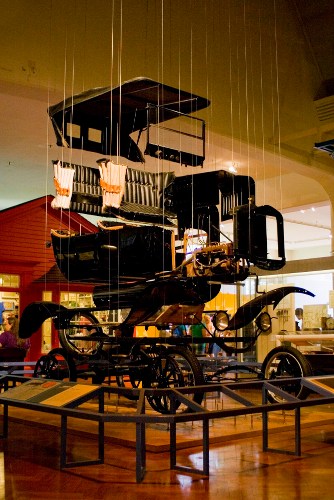 Here's an exploded view of the famous Model T, the first automobile mass produced on a large scale. Almost every car on the road today owes some modicum of inspiration, however indirect, to this 103-year-old design. 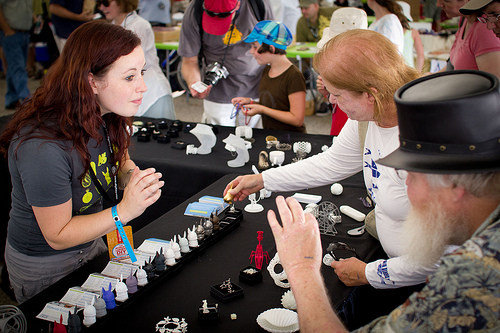 Okay, I love ShapeWays. In my opinion this is custom 3D manufacturing at its finest. It was a pleasure to see these guys represent in Detroit after they were right next door to our booth at the Bay Area Maker Faire back in May. Not only are these guys awesome for producing a lot of neat stuff from Nervous System but they are also the fab house behind Bathsheba Sculpture. That stuff is a math/astronomy nerd's dream and where I got the awesome model of the large scale structure of the universe that's sitting on my desk. 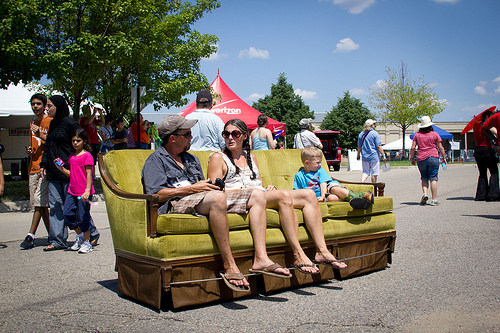 It's the Couch-Around! The fellow seated on the left is Grant Johnston and he was visible all day relaxing comfortably with joystick in hand. This couch zoomed silently about picking up random tired folks for a good sit-and-ride. 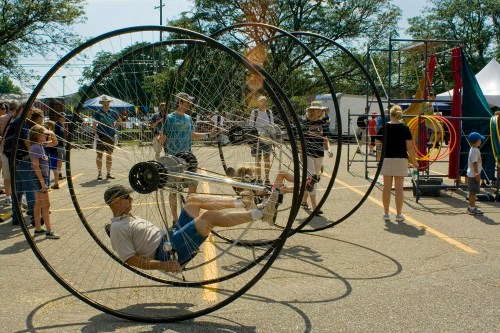 On the subject of odd Maker Faire vehicles, Detroit's event was teeming with uniquely engineered bicycles. My favorite were these recumbents where the label "big wheel" doesn't quite do justice. There were also a contraptions that looked like eight unicycles facing each other in a circle that took eight people to pilot and required a wide berth to get past, among many others. 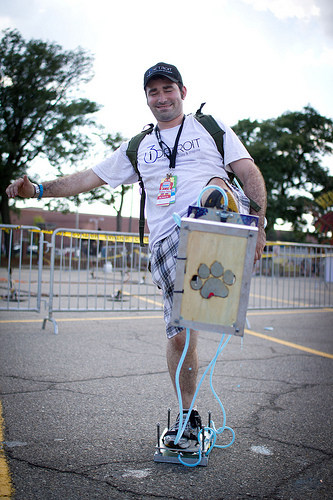 Monster Shoes was a fun project by Nick Britsky to leave brightly colored monster-sized footprints behind you as you walk. This is the first time I've seen anyone combine printers with footwear. 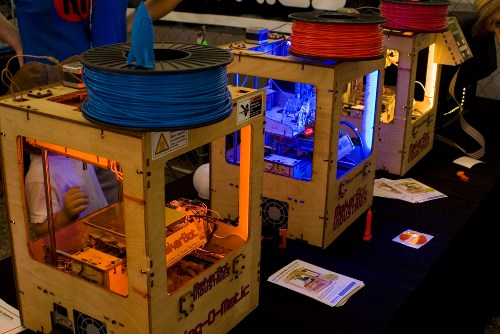 Back under the tents for some shade and I was awash in 3D printing technology. It's amazing how this field has matured in recent years. Here were at least a dozen variations on the theme, from ShapeWays (mentioned above), to MakerBot (pictured immediately above), to a variety of others working in several media including various plastics and laser woodcutting. 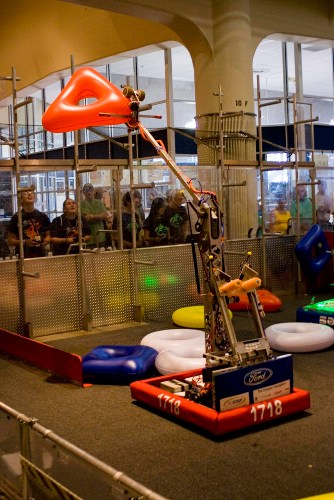 Back inside the air conditioned museum was a prodigious FIRST Robotics competition. More than a dozen teams of middle and high school aged youth gathered with their machines playing a complex game involving inflated, multi-colored, multi-shaped donuts being lifted onto pegs. The sounds of pneumatics firing almost drowned out the crowd noise from the spectators gathered around the arena. 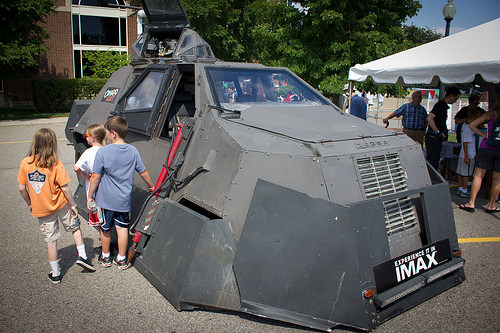 Now here's an attraction whose awesomeness goes over 9000. The Tornado Intercept Vehicle (TIV) is a heavily modified Dodge Ram 3500 and the brainchild of IMAX director Sean Casey who wanted better footage of violent twisters. It's designed to plant itself in the path of a tornado and ride it out to get the kind of shots that a typical storm chasing caravan simply can't achieve.  Sean gave a fascinating talk on his creation, including details on the TIV 1 (now retired), the TIV 2 (shown above on display at the fair) and the in-development TIV 3. If this tornado tank looks familiar, maybe you saw it on MythBusters. 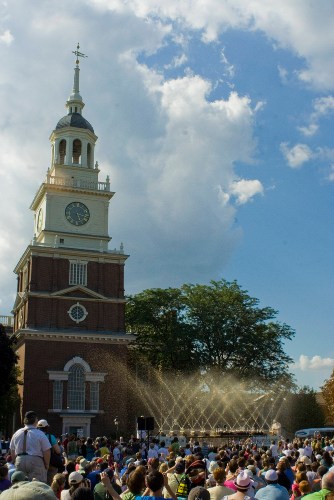 Finally, no Maker Faire would be complete without an enjoyable Diet Coke and Mentos demonstration. Late in the day, set against the noble backdrop of the Henry Ford Clock Tower, the fellas from EepyBird worked their magic and the crowd of hundreds showed their appreciation with the trademark "arms up."

Want to see more images?  You can find a few of my shots here and a few of Todd's here.

So I know what some of you Michiganders are thinking: when will SparkFun really come to Detroit Maker Faire? Sure we were there but it was just two guys with red shirts and cameras. Will next year be any different?

It's too early to say. A big reason for Todd and I to come out there this year was to get an idea for how Detroit stacks up with other fairs we've attended. The SparkFun travel calendar is already dominated by Bay Area in the spring and New York in the fall. Regardless, I was blown away by the breadth of the Detroit fair and plan to make a case for some official form of representation in 2012, but it's not just up to me. However it shakes out, Detroit, you guys put on an awesome event and I'm excited to return next year (in whatever capacity) to show support and marvel at your inventions.

Lastly, a big shout out to the folks from i3Detroit! Todd and I met some really creative folks building cool projects with SparkFun gear. You guys are a top-notch hacker space! Keep in touch and we'll see you in 2012.

A Round of New Products for Friday