A Round of New Products for Friday

We have a round of bright new products for you to take for a spin!

We've got some new stuff this week.  I say that a lot, but we have a lot of neat stuff! We really do have a good selection for everyone, so let's see my top picks for this week.

Unfortunately I did make a few mistakes in the video and I hate it when that happens! The bussed resistors contain 5 resistors, not 6. They have 6 pins, one of which is a common pin, and the others are for the resistors. Silly me. Also, the LilyPad LEDs are called Micros, not Sequins. We had a last minute name change and we had already shot the video. Other than that, I think the video is solid. Let's look at the products for this week. 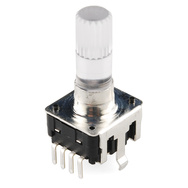 I really like using rotary encoders. They can be extremely useful since they can control a wide range of things. This rotary encoder is special because not only does it have a push-button, but its shaft contains red and green LEDs. You can use those to indicate multiple states for the encoder. 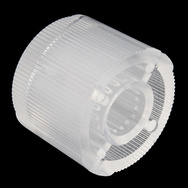 You'd hate to use a rotary encoder with an illuminated shaft only to cover it up with a black plastic knob, right? Well, thankfully we have these clear plastic knobs that fit perfectly with the rotary encoder above. They simply press-fit to the shaft and will let the LEDs shine through. 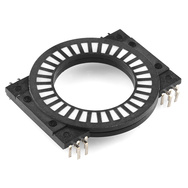 And to complete the entire ensemble, maybe you want to add this spiffy circular bargraph LED? It's a ring of 16 red LEDs that can be used to indicate the current position of a rotary encoder, volume levels, or anything else you can come up with. We are working on a breakout board that will hopefully be coming soon, but it's not too hard to use without one. The LEDs are just connected in 4 sections, each with a common ground. Check out the demo in the video for the whole setup! 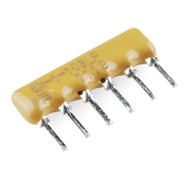 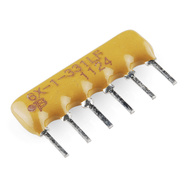 If you use a lot of LEDs in your projects, you probably realize that hooking up a bunch of current limiting resistors into a breadboard can be a bit of a pain. Or let's say you are using several buttons or switches and have numerous 10k pull-up resistors. Thankfully, these bussed resistors make life a bit easier. They come in a 0.1"-spaced package and contain 5 individual resistors. We have them in values of 330 ohm and 10k ohm. 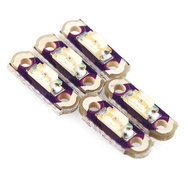 Moving right along! It seems like almost every week we have a new LilyPad or e-textile product. This week we have some new LilyPad LEDs for you to light up. The LilyPad LED Micros are similar to our other LilyPad LEDs but they don't have a current limiting resistor, so they're a bit more svelte. If you're using these with a microcontroller, chances are you won't need the current limiting resistor anyways. We currently have them in four colors, yellow, green, blue, and red. They come in rows of 5 that you snap apart (or not, we aren't going to tell you what to do). 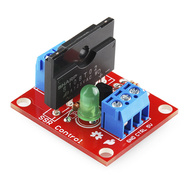 So, you want to switch high-current loads but you don't want to use a lot of current to do it and you don't want to rely on a mechanical relay. Well, the easiest way to accomplish this would be to check out our new Solid State Relay Kit. It uses an 8A solid state relay and can easily hook up to a microcontroller with screw terminals. 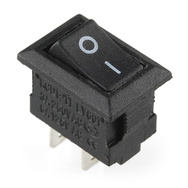 Here is a good and trusty rocker switch. If you're looking for a no-frills way to turn something on and off, you can't go wrong with a rocker switch. This one's a bit smaller than our other one but can still handle a reasonable amount of current. 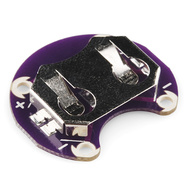 Everyone makes mistakes and we are certainly not immune from them. We made a mistake with our last build of these LilyPad Coin Cell Battery Holders. As it turns out, the silk for the battery holder was backwards making it relatively difficult to take the battery out. See that convenient cutout which would make it easy to take out the battery? Well, the battery slides in from the wrong side. Sigh. They still work just fine, it's just a bit of a pain to get the battery in and out. Get them cheap while they last. 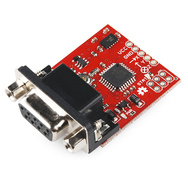 We have a new revision of the Serial Accelerometer Dongle. We've changed the PIC out for an ATMega and also swapped out the accelerometer. The range is less than that of the old version, but it's cheaper this time. If you're looking for an accelerometer that talks over serial, check out the new revision. 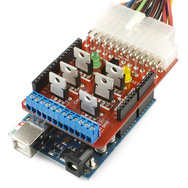 And lastly we have a new revision of the Power Driver Shield Kit. We've added a protection diode to the power input on this version. Other than that, it remains the same.

Well, that's all we have for this week. Thanks for reading and slide on back next week for some more new products!