This week we have some exciting new tools, a robot platform, and some other stuff.

Today is a special day. Not only is it my first anniversary (I can't believe it's already been a year!), but we also have some really cool products this week. For those of you in the market for some new tools, you might want to check out what we have this week. Also, just want to mention we are accepting caption contest entries until 10 AM MST today, September 30th. Get yours in and we'll announce the winner on Monday! Now on to your new products for this week...

I don't want the video in any way to take away from the Rover 5. It's a GREAT robotics platform, but we seriously beat it to death. I'm surprised it took as much abuse as it did - there's a lot we didn't show because the camera wasn't rolling. Also, the power cord was recessed and I couldn't see it very well. 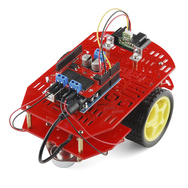 Sometimes you just need a basic robot platform to start prototyping your next project. The Magician Chassis is exactly that. The kit consists of two pre-cut pieces of plastic, hardware, motors and wheels. By adding an Arduino and a motor driver, you can easily get a robot up and running. This is a great kit for beginners and educational purposes. 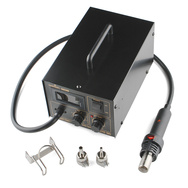 If you've ever tried to do any SMD soldering without a hot-air rework station, you can find it quite frustrating. Once you use hot-air for SMD work, you may never go back! We have a new SparkFun-branded hot-air rework station that should work well for just about any application. I actually used one of these just last week to reflow the BGA video IC on my laptop. Once you work with hot-air, you feel like you can rework any board. This rework station features adjustable temperature and airflow as well as a digital temperature readout. It also includes two nozzles. 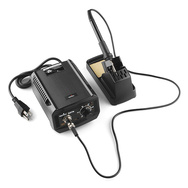 We have a new version of our SparkFun-branded soldering iron. This new version has some slight cosmetic changes, but is overall just as good as the old one. It includes the a nice base and a soldering iron complete with SparkFun flame. This 50W iron is adjustable (with an analog dial) and is ESD safe. Also, I'd like to point out that we still have some of the old one left, and they are currently on sale for $29.95 until we run out! Get them while they last. 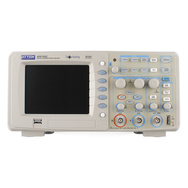 An oscilloscope is something you will probably end up needing if you spend enough time with electronics. Our new 100MHz Digital Oscilloscope is pretty handy if you need to measure and view waveforms. You can even control the unit over USB and save waveforms to a USB flash drive. It even has a full color LCD screen and comes with probes. What else could you ask for? Actually, don't answer that. 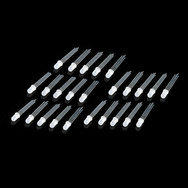 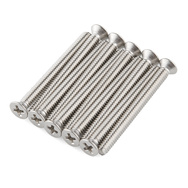 In an attempt to start carrying all of our hardware in packs of ten, we now have our 1.25" 4-40 screws in packs of ten. They are metal. They are screws. That's about all there is to say about them.

There it is, your new products for this week. I really encourage everyone to check out the new tools. We'll see you again next week with a new video, post, and more products. See you then.