Look at All the Kits We Give

The story behind the SparkFun kits.

There was a time when my days' labors could be measured out in mountains of crimson boxes, a time when I went home every evening with my fingers as red as the setting sun. There was a time when I could make boxes like a machine and count resistors like...well, also like a machine, but a different machine (one that counts resistors). Yea, in my youth my heart was touched with fire - a fire called kitting - and merrily I charged down the shelves of SparkFun astride a scooter like a Gaul upon his chariot, plucking components like spears from the hearts of Roman invaders. For I was a kitter once, and somewhat younger. 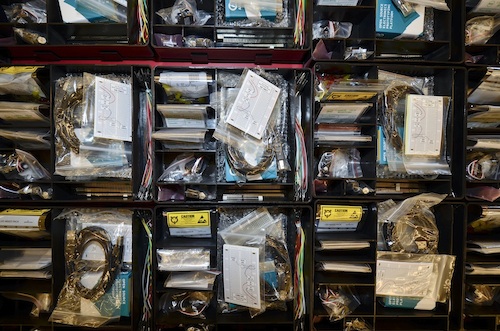 Sure, many of you have probably looked at all the essential components and accessories in your SparkFun Inventor's Kit box and thought, "Dang, I'd hate to be the person who has put all this stuff into this thing." But the stuff must be put into the things, my friends, and thanks to the diligent labor of SparkFun's kitting crew, our kits are now assembled by the thousands to be shipped all over the world. I can honestly say that it filled me with great pride to gaze upon the stacks of red and black boxes, plastic baggies, and clam shells and be able to visualize the role I played in bringing a little geekish delight to the universe. Our current kitting/packaging team consists of ten people led by Mike Snow. They occupy their own area on the production floor, have their own inventory, computers, and have even developed their own subculture and dialect. Okay, maybe "dialect" is too strong a word, but I did hear they once referred to their co-workers upstairs as "carpet walkers." But I digress. What is now a flourishing sub-department of production was once but a single man with a pile of boxes under his desk. 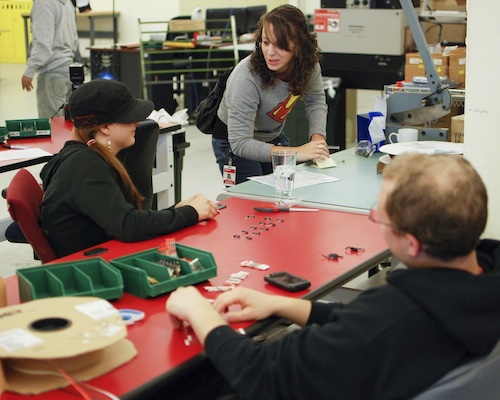 It can be said that our kitting operations have taken off in leaps and bounds, even relative to a company that has been growing rapidly in all facets. As Matt explained in his previous post, kits became part of our operations back in 2007. Initially, when kits needed to be built, a technician would have to take a break from his or her soldering to throw together a few dozen kits here and there. By September 2009, as both the demand for and the selection of kits increased, SparkFun decided to hire its first full-time kitter, Kade Jensen. Kade was kitting's Abraham (or Leif Ericson, if you prefer Viking analogies). He's the man who really got the ball rolling; he was able to pump out 2,000 kits per month on his own. Kitting was extremely low-tech back then. Our main tools consisted of a little heat-sealer, scissors, and a pair of mechanic's gloves. There were only six to ten different products that needed to be kitted.

I started in December of 2009. When our manager, Abe, went over the printed instruction sheets with me he basically emphasized that "while this is the way we've been doing things, if you see a way to improve upon it, go for it." This simple statement immediately highlighted something about SparkFun that stood in stark contrast to most of the places I'd worked. Innovation and personal initiative are immediately encouraged to the benefit of all parties involved. SparkFun engineer Ryan Owens later put it really well: "Ideas are created equal." Our first big time-saving pieces of technology were examples of SparkFun at its most glorious. When we needed a way to spool 30 foot increments of conductive thread around a LilyPad Protoboard, Tim in Tech Support got an Arduino Diecimila and put together a neat little spooling machine that cleverly incorporated an old CDR container. When we needed to cut specific lengths of hook-up wire, Kade put some nails and marker marks onto a board and, voilà, another time-saver was born. 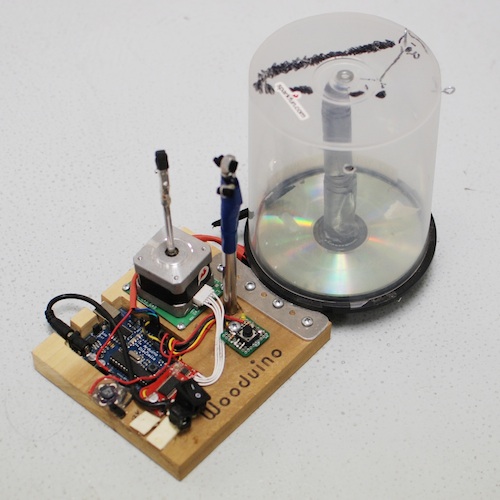 2010 was a huge year for kitting as it was for SparkFun as a whole. We grew to three or four full-time kitters and got our own little section in the new west wing of the production floor. Our product line-up exploded. By the time I left kitting in November, we had gone from ten to seventy-something different types of kits. We started putting together retail clamshell packaging and using heatshrink for the first time, and had to develop new assembly-line techniques to adapt to the changing demands and growing quantities. Working with a crew of people was generally a blast. The work was simple enough that we could converse while taking care of business at the same time. It was really good way to get to know co-workers and to share creative (and perhaps some not-so-creative) ideas. Moreover, it was a fantastic way to be introduced to the world of DIY electronics. Like many kitters, I came to SparkFun as an outsider with little no knowledge of electronics engineering. As Kade said, "We're a pack of strays." I was a recent graduate from the Jack Kerouac School of Disembodied Poetics and was baffled by our bags and boxes of full little thingamajiggers that vaguely reminded me of stuff I saw inside that computer monitor I smashed as an act of "performance art" with some drunken Coast Guardsmen in my undergrad years. Kade, a fellow-poet, described it well: "You look at our products every day and eventually you're so confused by them you want to find out more." Mike Snow came to SparkFun with a background as a tattoo-artist. He was amazed to find the tremendous artistic potential of SparkFun's products. "I didn't realize the functional and the creative could be so much in tandem," he told me. "You can be creative and nerdy at the same time." 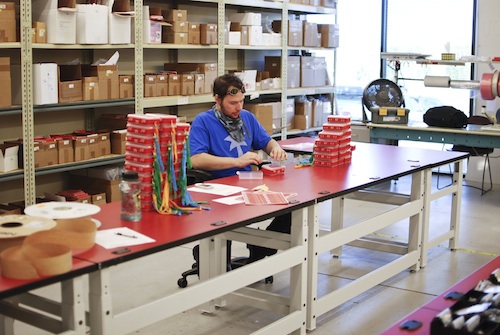 Kitting has become a "foot in the door" sort of position for many people here at SparkFun. In addition to the 10 current kitters/packagers, there are about 10 former kitters working elsewhere here. Kade is now a diagnostic technician. There are also former kitters working in Customer Service, Technical Support, Engineering, and as soldering technicians in Production. Many of us who have gotten our feet wet in kitting have enjoyed SparkFun's numerous opportunities to expand our creative interests into the mighty world of embedded electronics, whether it be through the "Lunch and Learn" classes hosted by our Education Department or simply by collaborating informally with our friends and colleagues here. 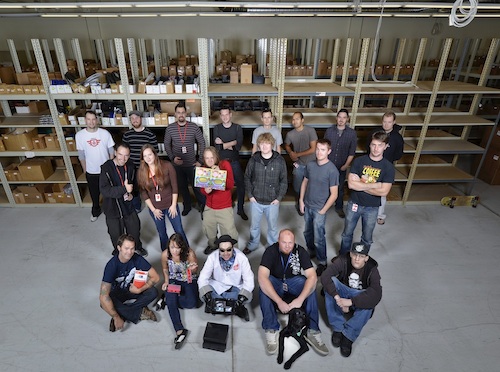