Check out this interview with Jason Hibbets from opensource.com.

As you may have known, SparkFun is a big proponent of Open Source and Open Source Hardware. Recently we spoke with Jason Hibbets from opensource.com about how opensource.com is trying to bring a new level of collaboration to the world outside of electronics (yes, such a world exists - we were surprised too). Check out our conversation! 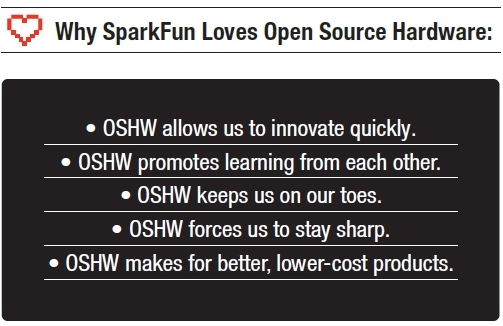 Can you provide us with some background on who you are what you do?

I’m a project manager at Red Hat responsible for opensource.com. I've been with Red Hat since 2003. I live in Raleigh, NC and I’m really into my local open government scene. It’s interesting how I’ve been able to take my knowledge of open source and apply it to my local community – to the extent I’m even a co-organizer of CityCamp Raleigh, an unconference series where citizens can collaborate on innovative ideas to improve the quality of life for our city. I’m very civically engaged and in my spare time, I manage a hyperlocal blog for Raleigh’s Creative District. I’m also a surfer stuck in the city, so I escape often to keep me in balance.

What is opensource.com all about?

On opensource.com, we’re exploring how collaboration, transparency, participation and other pillars of open source are being applied to disciplines beyond technology, such as business, education, and government. Essentially, we collect and share stories about how open source is influencing organizations and individuals around the world. We highlight how open source is impacting society, changing the way we work, and improving how we learn.

How do you define open source?

The term open source is typically used to describe software source code and the collaborative model for how it's developed. To me, open source is more than a development model. It’s a culture and way of thinking. It’s people working together collaboratively to solve problems, transparently and openly, inviting others to participate and contribute.

I don’t think it’s possible to define open source without mentioning community. The people that participate in open source projects are the power behind open source. And the community involves more than just developers. For example, projects like Fedora have project managers, marketing specialists, artists, documentation writers, and more.

I’m not a coder. I apply my open source knowledge to my interests, like open government. How? By participating in my local government and finding ways to engage other citizens. By collaborating with elected officials, city staff, and citizens to come up with new policies and initiatives. By working with other citizens to make our government better through technology.

Do you see any emerging trends related to open source? Hardware? Software? Etc.?

I think we’re definitely seeing increased adoption of open source and open source methodologies. It’s really hard for me to imagine a world without open source. You have authors like Clay Shirky writing entire books, such as Cognitive Surplus, about the fundamentals of open source and why people spend their spare time contributing to projects like Wikipedia. You have major companies like Google, Facebook, and Twitter who base their platforms on an open source infrastructure. We have an entire generation growing up on the internet—and many of them don’t understand that the search tools, social media platforms, and the Internet itself would not be possible without open source. I think once people discover open source and the power in the collaborative model, we’ll start to see more positive change in our society.

There are several trends that I see from the stories we collect on opensource.com that people should keep an eye on. First, open education. School systems around the country are experiencing extremely tight budgets. Schools are spending money on textbooks, that unfortunately, can be out-of-date by the time they get used in the classroom. The solution? A combination of open textbooks and open education resources that empower teachers to create courseware collaboratively with other teachers and then customize it to their classroom.Another trend is in open government. We’re seeing more governments and agencies at the local, state, and federal level embrace the Open Government Initiative signed by President Obama when he first took office. It highlights transparency, collaboration, and participation as key elements to create an open and accountable government. This sounds familiar right? Because it’s based on the open source way. We’re seeing innovative ideas coming from organizations like Code for America and Civic Commons. An entire ecosystem is forming around the open government movement. Civic start-ups like SeeClickFix and GovDelivery are helping governments achieve more openness and citizen engagement with their products.

Have you ever used or made something using open source hardware or software?

I’m more of a community person so getting intimate with hardware or deep down in the code isn’t really my specialty. I've been involved with open source for more than a decade, but I never got involved in a community project in any significant way until I found CityCamp. I haven't submitted a single line of code to open source, but I'm able to bring my project management and community-building skills to the table. That's important because it highlights the fact that there is more to open source contributions than writing code.

As far as using open source, it’s an everyday occurrence for me. In fact, people use open source and probably don’t even realize it. Linux is probably the most popular open source project that people use on a daily basis. It’s powering data centers around the world including financial institutions, animation studios, and popular websites. It’s embedded in phones, TVs, and other devices. Other popular open source projects include Firefox, a freely available web browser and Audacity, a free, cross-platform sound editor. People create content on the web using platforms like Drupal and WordPress, both open source, and more importantly, both have very strong user communities.

Do you plan on making an open source hardware project in the future?

While I don’t have any current ambitions to build my own open hardware, I do plan on using open designs for a home project. My wife has been itching to build a chicken coop. We’ve done a lot of research on chickens and particularly, coop designs. I could probably come up with a custom design, but I’d rather go the open source route—build on shared knowledge and openly available designs. Maybe I could even improve on it and contribute back my improvement back. That would be the open source way.