How do I beer?

SparkFun's five laws of drinking at work, where the beer flows like wine.

This is a post about corporate culture. Well ya, that and beer. 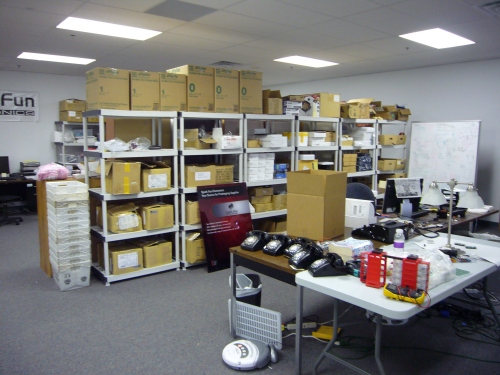 SparkFun shipping floor circa 2005. Check out the Roomba - that was our "janitorial service" for about six months!

Back in 2005, SparkFun moved into a commercial space from a basement. There were only about 11 of us working in an amazingly roomy 2,300 sq ft space. We often found ourselves sitting around the office talking about the future with a six-pack of beer. What made it special was that we were doing something that everyone told us we couldn't do. Kind of like when you move away from home and you buy the super sugary cereal for the first time -- the type your parents never let you buy. We were all grown up, and we could drink beer at work if we wanted to.

And surprisingly, it helped! The flow of new ideas and great conversations was fantastic. So we decided in 2006 to get a kegerator. Our building-mates (medical device and drug manufacturers) thought us quite odd indeed. We decided it was important to put a few rules around the keg, so over a beer we collectively made some rules to make the office a place we all wanted to work.

Fast forward six years, and I cannot begin to tell you how many people have told me that beer in the office is a horrible idea -- cataclysmically bad in fact. What they failed to see was that a keg is not about tempting risk and liability, it is about a different work environment where folks are asked to take on a certain amount of trust and responsibility. They obviously had never heard of such things.

This is the work of the new graphic designer at SparkFun, Pete Holm. He took what we were trying to say and made it 11 times more understandable. Have a look, it's pretty good.

Will we always have beer at SparkFun? Perhaps not. I am not going to claim the keg has never been abused, but I do believe the keg is respected. The keg will stick around until we can no longer respect the privilege. In the mean time, we've learned a powerful lesson about the difference between business necessity (paying taxes) and business tradition (wearing slacks). As long as we make something a priority (cool people, skateboards, beer, lolz) we can make it happen.