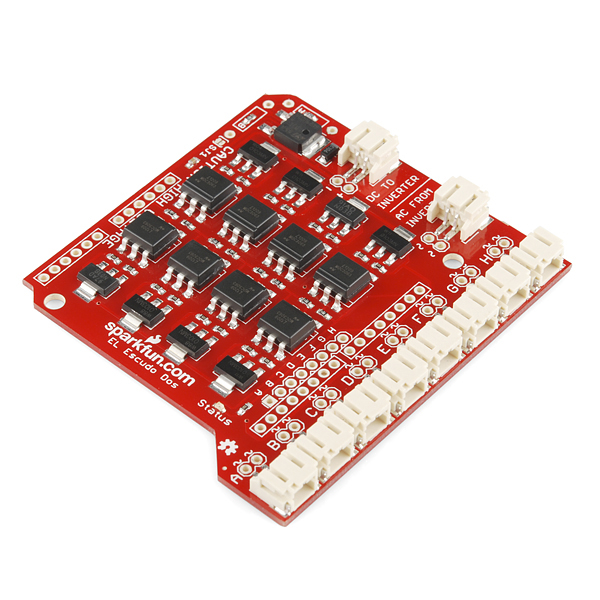 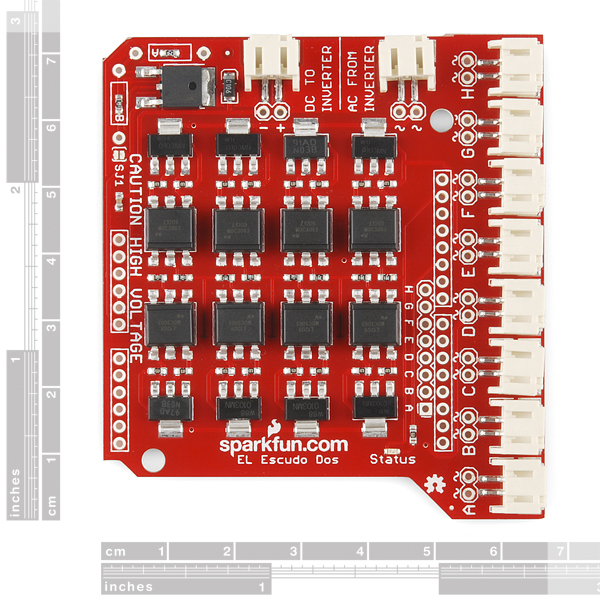 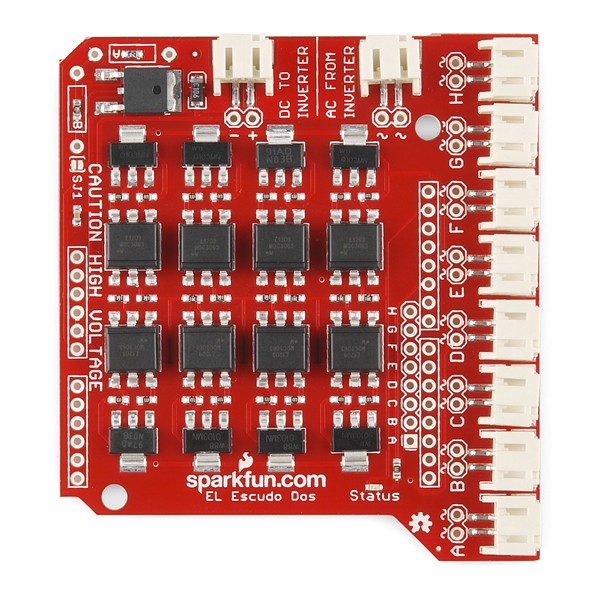 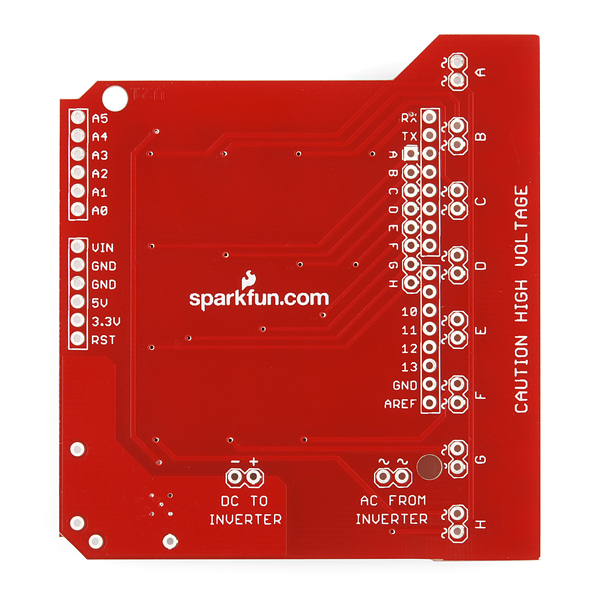 We've heard you, and made a number of improvements to our EL Shield. The new version adds zero-crossing optoisolated triacs for noise-free operation and full isolation between the AC and DC sides, and includes a 1.5A adjustable linear regulator to supply regulated DC to an external inverter (not included).

The SparkFun EL Escudo Dos is an Arduino shield for controlling up to eight strands of electroluminescent wire. EL wire is flexible plastic cord that glows brightly when high-voltage AC is applied to it. It's available in numerous colors (see the related products below), runs cool, and requires very little current, but can be difficult to work with because of the high-voltage requirements. The El Escudo Dos contains circuitry to safely switch high-voltage AC on and off, allowing you to create animated displays or whatever else your imagination can come up with.

In addition to this shield, you will need Arduino headers (see the related products below), an inverter (a component that generates the high-voltage AC needed by EL wire), and the EL wire itself. SparkFun carries two inverters, a 3V-input version that can drive a few feet of EL wire, and a 12V-input version capable of driving dozens of feet of EL wire. Choose the one appropriate to your power source and driving requirements. The shield's built-in regulator comes preset to 3.3V, but can be set to any voltage by changing two resistors, or bypassed with a solder jumper to send the Arduino's RAW voltage directly to the inverter (perfect for 12V setups!). See the tutorial below.

about 7 years ago by Mr. Shup verified purchaser

I purchased two of these for student EL Wire projects in my classroom. One group had a basic EL Wire sequence powered from a 12V input up and running in under two class periods. The coding involved is simple and easy to modify for different effects and patterns. The second group messed up on their initial soldering and had to do some significant work to fix their mistake. Not sure if they messed something up in the re-soldering process but this board's "DC to Inverter" port will now only throughput a max 3V which is barely enough to light up the EL wire. We ended up having to bypass this port altogether and power the inverter and the Arduino board separately to get it to work. Overall, a fun little shield that allows for fairly complex EL wire projects with minimal difficulty.

about 7 years ago by Member #192106 verified purchaser

Intermittent issues where an EL wire stays on even when logic says it should be off. Have LED wired to same pin which shows proper logic. Ordered 2nd board which had the same issues on different pins. Found that I could hide the problem by turning all EL segments off, then turning them back on.

Hi, This sounds like it could be a couple of things causing your issues. Please contact us at techsupport at sparkfun.com for more assistance.

about 7 years ago by Member #729031 verified purchaser

Great except for hookup problems

about 6 years ago by vermontslug verified purchaser

This thing is a beast. I did have some issues getting it connected to my project. The EL tape I had didn't have the right connector. I noticed that Sparkfun does sell loose JST connectors, but I'm too damn cheap to buy eight connectors at $.95 per. So I soldered the EL leads directly to the board. Given my skill set, there was one short in my soldering that sent up wisps of smoke when it was energized. I fixed it and now it works fine. Surviving the rough handing and short is a testament to how well this board works.

about 5 years ago by Member #831669 verified purchaser

Started playing around with EL wire recently and this is a great little shield! Though the connectors didn't match the connectors on my EL wire (I purchased the EL wire from another source), I was able to make 8 new connectors with some I already had. I'm also using the 12v inverter since I'm using 9 foot EL wires on each channel. That's about 72 feet of EL wire! Super easy to use and program!

The board works well. I connected the Pi GPIO pins to the 8 connections labeled A through H and a connection to ground (I am not using the 5 volt option). This makes for a messy bundle of wires. It would have been great to have a header that I could run flat cable over to the Pi proto board where I would then connect the gpio pins and the ground (and I guess the 5v for those that will be using it). I know the board is really designed for Arduino but one header would make it easy to use with a Pi.

about 4 years ago by Jeff12 verified purchaser

I am using the board to light the inside of a cabinet when the door is opened. Every time* the lights come on as advertised. (*except when I messed up the Arduino code for several hours...)

about 7 years ago by Member #469550 verified purchaser

I don't know what to do anymore.

about 3 years ago by HeathenHacks verified purchaser

All I wanted to do is turn on the EL Wires 1 by 1 and once they are all turned on, I want to turn them off 1 by 1 for the initial testing phase. But, no. It would just stay on. My test code is super simple, so don't think that's problem.

It's really hard to use on my current project (It's like a VU Meter, but on a shutter shades) where I will use a sound sensor and/or an audio analyzer module to turn on 2 EL Wires once a certain value has been reached.

It's a bit frustrating because when all of the EL Wires has been turned on, something would emit a high-pitched noise and the EL Wires would stay on and would not turn off anymore, until I unplug the Arduino and plug it in again.

I have tried to use a KY-038 and KY-037 sound sensors, a 7 Band Spectrum Audio Analyzer Module and Sound Sensor from a different vendor and still getting the same result.

I even bought a genuine Arduino UNO just to try my luck, but still got the same result, unfortunately. I guess I'd just include this project on my re-visit folder.

The customer service is spectacular, tho. So, that's good.

about 7 years ago by Member #556959 verified purchaser

It worked surprisingly well for Arduino shields! half of the ELwires behaved differently but I suspect that's not caused by the Escudo Dos. A recommandation for sensor input - ELwire output installations!