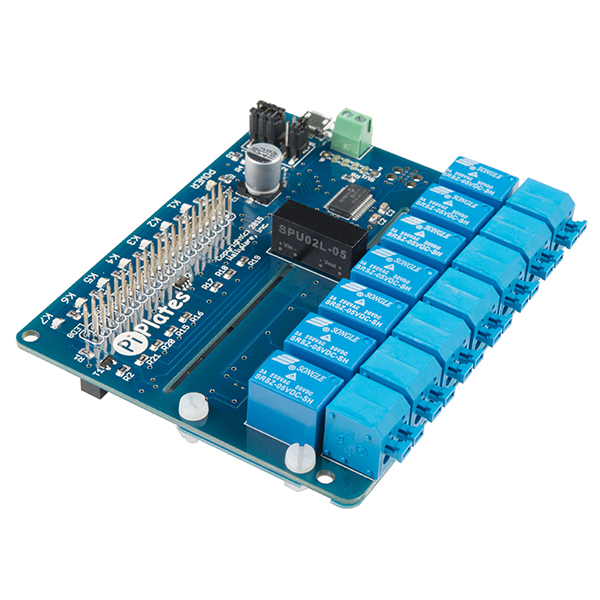 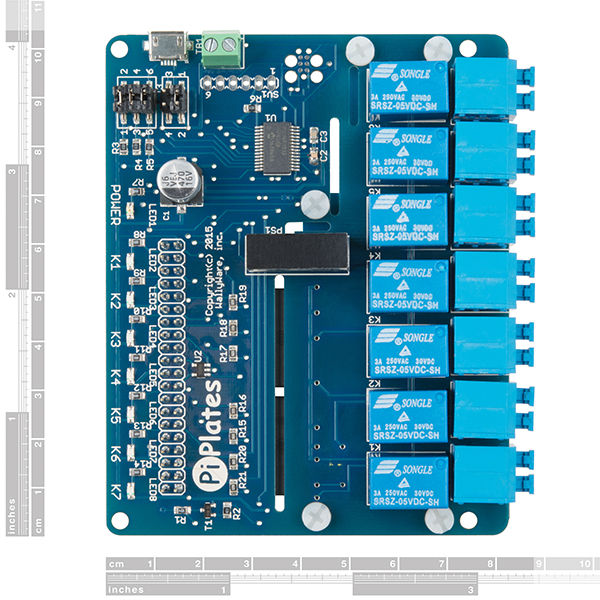 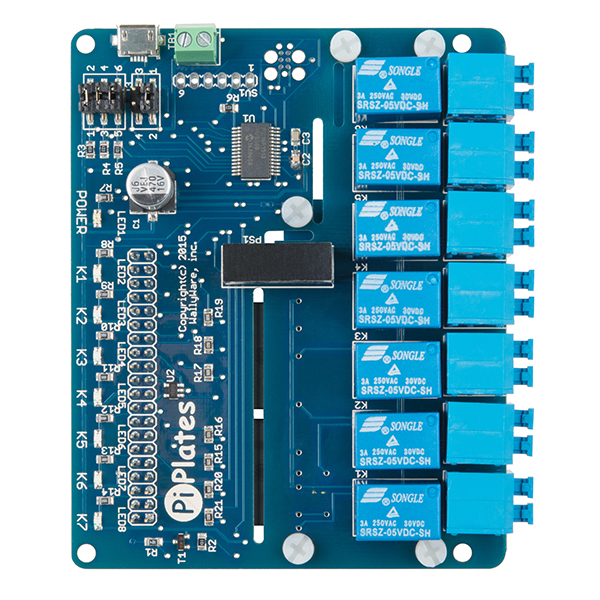 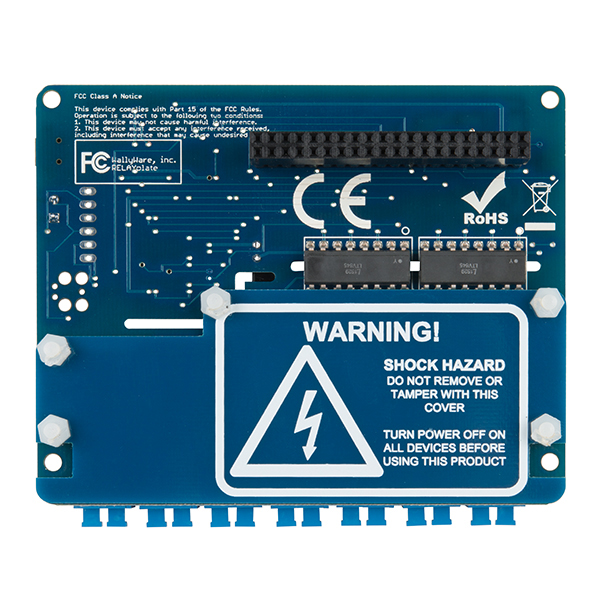 The RELAYplate from Pi-Plates is the first dedicated relay board for the Raspberry Pi designed to meet the safety requirements of UL 60950 while being capable of switching 120 volts AC. Each of the seven relays is UL rated to switch 1 amp at 120volts AC or 30 volts DC. And, like all Pi-Plates, you can stack these boards to increase your relay count to 56 using eight plates. The RELAYplate board is compatible with the DAQCplate and MOTORplate, allowing you to create the perfect stack of boards to control your project.

Pi-Plates are a family of stackable and interchangeable add-on circuit boards that allow you to interact with the outside world using your Raspberry Pi. Every Pi-Plate is designed to provide a robust set of features at minimal cost while using the fewest pins possible on the RPi header. Pi-Plates are mechanically and electrically compatible with all revisions of the Raspberry Pi with 40 pin headers (including the Pi 3 Model B and Pi Zero) and are designed to satisfy the needs of hobbyists, experimenters and professionals.

I built a wireless power sequencer.

about 5 years ago by johnk verified purchaser

EDIT: I lost a relay already which stuck on with a 0.30A load. The load was an LED lamp which perhaps had a large inrush current, but in any case I can no longer recommend this board. When I opened the metal enclosure there was the characteristic "burn out" smell and I assume the relay contacts arced as the other relays continued to work. I'd like to pull it apart and investigate, but at the price I need to return it intact.

EDIT #2: Definitely a sticking relay as it opens when lightly tapped. Will look at datasheet for the device just for grins. The relay is marked as 3A 250 VAC and the manufacturer says no more than 1 amp, so 0.30A shouldn't have been an issue.

I've finished reworking a used Furman RP-8 power conditioner to be a power sequencer for my virtual pipe organ's speakers. The RP-8 has plenty of empty space inside to house the RELAYplate and a Raspberry Pi 0w along with a 5v power supply. I can now control power to the remote speakers from any browser on a desktop PC or my smart phone. I can imagine a lot of other uses as well.

The documentation needs improvement and consolidation in one user manual, but the product works as advertised and was extremely simple to set up.

about 6 years ago by Member #873804 verified purchaser

When I ordered this item I expected some type instruction to accompany it that would explain how to hook it up, but no such paperwork was included. So, I am unable to utilize it for the purpose intended.

All the instructions and information on the board are provided in the documentation section above - you can find them by following these links: http://pi-plates.com/relayplate-users-guide/ http://pi-plates.com/examples/#Controlling_aRELAYplate_Remotely_with_Your_Web_Browser

about 4 years ago by Member #158564 verified purchaser