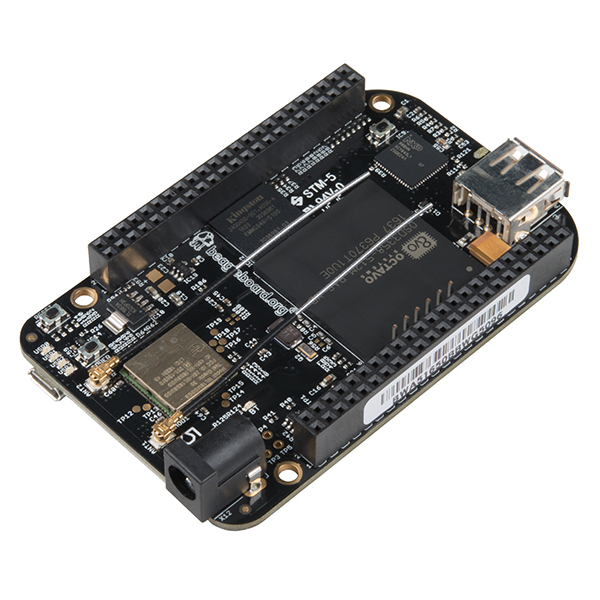 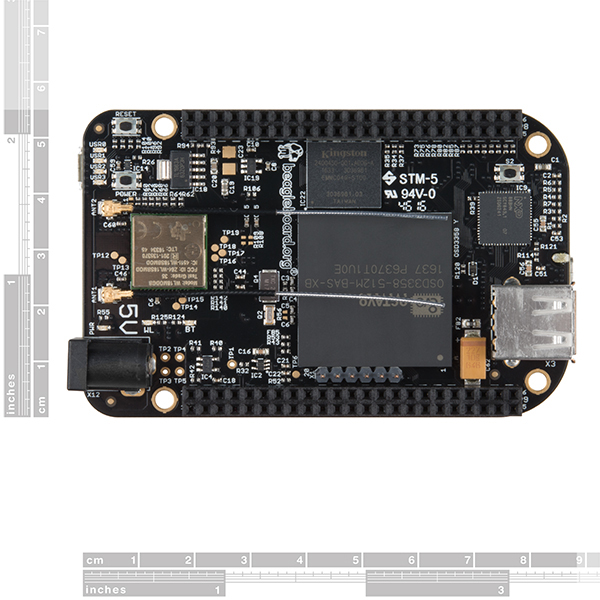 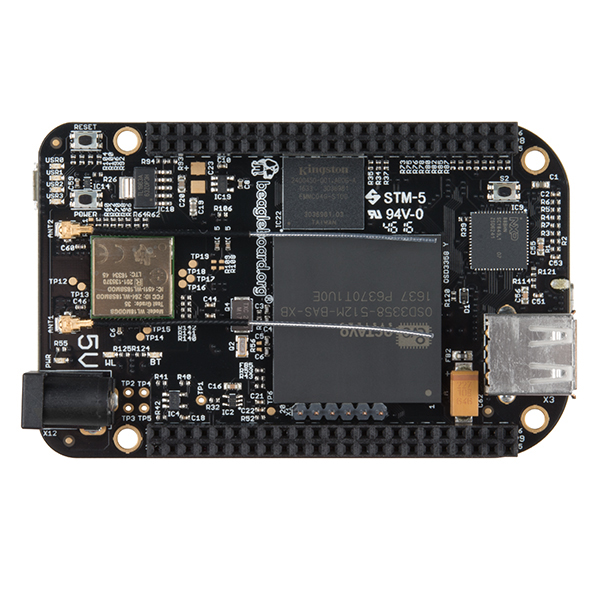 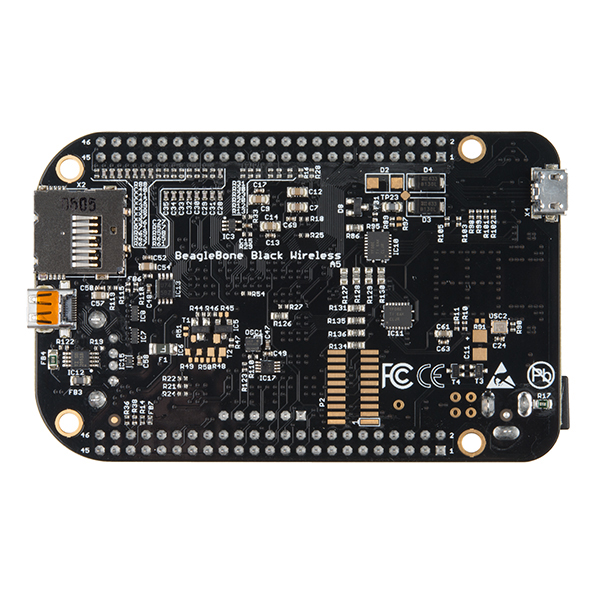 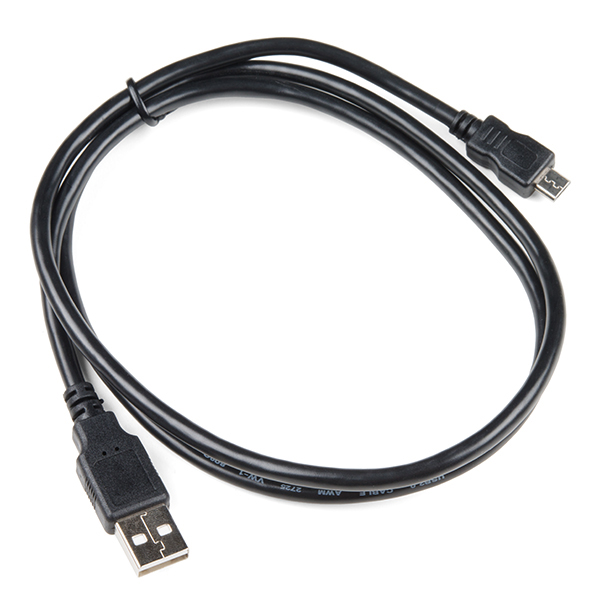 With plenty of I/O and processing power for real-time analysis provided by the Octavo Systems OSD3358 1GHz ARM Cortex-A8 processor, BeagleBone Black Wireless can be complemented with cape plug-in boards, which augment Black’s functionality. They're called capes because Underdog is a beagle, and he wears a cape. Makes sense, right?

At more than 3 million Dhrystone operations per second and vector floating point arithmetic operations, the BeagleBone Black Wireless is capable of not just interfacing to all of your robotics motor drivers, location or pressure sensors and 2D or 3D cameras, but also running OpenCV, OpenNI and other image collection and analysis software to recognize the objects around your robot and the gestures you might make to control it.

Like BeagleBone Black, the wireless version retains HDMI output, serial debug port, PC USB interface, USB 2.0 host, and reset and power buttons. This version adds two more status LEDs for WiFi and Bluetooth. Also retained is the 4GB of onboard eMMC memory with Debian Linux pre-installed, allowing BeagleBone Black Wireless to boot in around 10 seconds, and have you developing through your web browser in less than 5 minutes using just a single USB cable.

Note: These are BeagleBone Black Wireless Compliant boards made by Element14. Though these may not be made by the good folks at BeagleBoard, each BBB is officially recognized by them, and the computers are identical in both form and function. For more information, check out BeagleBoard's Compliant Program.

Frustrating!!!! But getting the hang of it.

about 4 years ago by Member #59755 verified purchaser

So this is the BeagleBone Black ****Wireless****.. but as a previous reviewer pointed out, it does NOT come working out of the box. other me: ...really?? me: yes.. really.. Perhaps this is because the boards Sparkfun has are not actually made by BeagleBoard, just a guess (not taking a jab at Sparkfun!). There is also little to no documentation explaining how to get it working. At any rate, here is what I ended up doing: Update to the latest OS release (in my case I went with Debian). You WILL need a memory card, so you might as well buy one now. This ended being a two step process for me. Once you load the image on to the card, you will need to edit a text file within the card. I am using Mac OS and I could not read the card after the image was burned so ended up booting the BeagleBone to the card, editing the text file /boot/uEnv.txt (remove the # from #cmdline=init=/opt/scripts/tools/eMMC/init-eMMC-flasher-v3.sh) and rebooting without holding the boot button (Holding the boot button is NOT flashing the board, I saw several places state this). After it flashes, you can remove the card and boot in to the onboard flash. The wifi will still not work at this point. For the wifi, go back in to the /boot/uEnv.txt file and add the following line: dtb=am335x-boneblack-wireless.dtb Now reboot. There should be more blinky blinkies.. and you should see the BeagleBone show up as a wifi access point.

Very happy with it! getting WLAN to work was abit of a hassle..

about 4 years ago by Member #296977 verified purchaser

I've had the BBBW on the bench for a few weeks, now it is working, all good. Mainly doing some Python GPIO and MQTT (over built in WiFi now) as IOT sandbox. The main issue I had was getting WLAN to work. connmanctl and ifconfig were not showing any wireless adapters or ports out of the box. It took I while to figure it out. Apparently it's not uncommon for these boards to ship with 'non-wireless' flash images. Found the solution here:

Copy-paste from the link:

Once this was done, and a few more straightforward teaks I was able to connect to home WLAN, install python packages over WiFi, and get some MQTT communications done using python paho mqtt package.

about 3 years ago by Member #567653 verified purchaser

This is my third, love how useful they are. This one will probably used as part of a timing system for autocross. Using the WiFi as a hotspot so that timing results can be read by anyone on a tablet or smart phone.

about 3 years ago by Bob G in FLORIDA! verified purchaser

This is a perfect little tool to become my primary automotive instrumentation device. I've also purchased the 4G 7" LCD cape (wonder why that's now retired?) Plan is to hook this up to the OBD-II breakout board, with a GPS (for a REAL speedo) and hack on into the cars ECM to display actual coolant temp (not some meaningless gauge) and other significant data, all displayed right ABOVE my steering wheel. Oh, and I'll be using bluetooth TPMS valve stem caps, so I can see the ACTUAL tire pressure in each tire, not a stupid "TPMS is bad" idiot light on my dash.

Of course, like others have said... The EEPROM on board is mis-programmed, so you have to solder a patch wire onto the board to ground TP1, and then you can actually write the correct data to the EEPROM. Not a big deal, but not obvious, either. THEN, if you want to flash the OS on the board with the latest version, you can do it from the SD card. Not too hard, but I found that pressing that stiff little button during power-up, which SHOULD cause the OS to be flashed from the SD card, never worked, so I found the hack to make it automatically flash whenever there is an SD card in at boot. That got her done!

This isn't a great web browser with the LCD cape - it's SLOW. I haven't tried using the micro-HDMI port yet. Need a cable for that. But - it should be an awesome auto instrument display!

Very good project base, but watch those Overlays

about 3 years ago by Member #429047 verified purchaser

The BeagleBone black is a very good base for an IoT project. It has enough processing power to do all those IoT tyoe tasks and can serve up a web page. Default Apache2 is installed. My biggest complaint is they keep on changing the Overlay styles for the capes. If the u-Boot loader is older than 1.2017, it will need to be upgraded to use the newer images. To upgrade, just get the latest image on an SD card and flash it to the on board eMMC. If the onboard eMMC is not upgraded the Overlays in the SD card just won't work. It is a pain, but once everything is upgraded it works like a champ.

Not compatible with required application

about 2 months ago by Member #158886 verified purchaser

The BBBW turns out to be incompatible with both applications for which it was purchased. A BBB w/ ethernet works fine. Now I'm stuck with the unit because Sparkfun does not accept returns. Not blaming anyone but myself, but it seems very inflexible to not allow a return credit towards the BBB. As a result I will be purchasing one from Mouser or Digikey.