Retired COM-11647 RoHS Open Source Hardware 3
Note: Retired Product
This product has been retired from our catalog and is no longer for sale. This page is made available for those looking for datasheets and the simply curious. 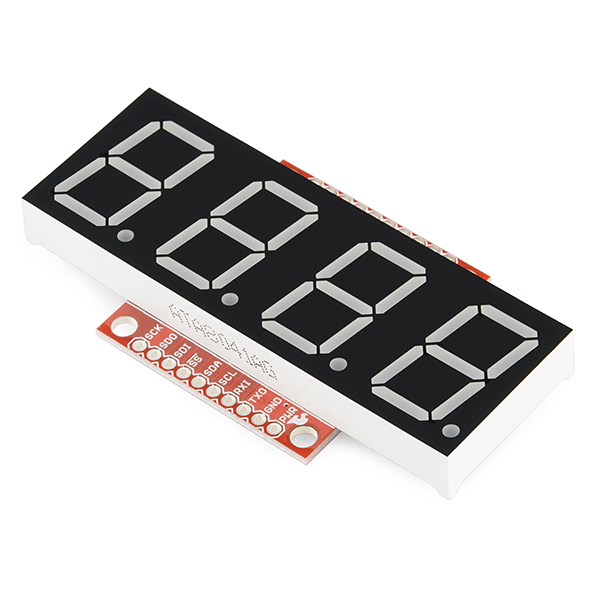 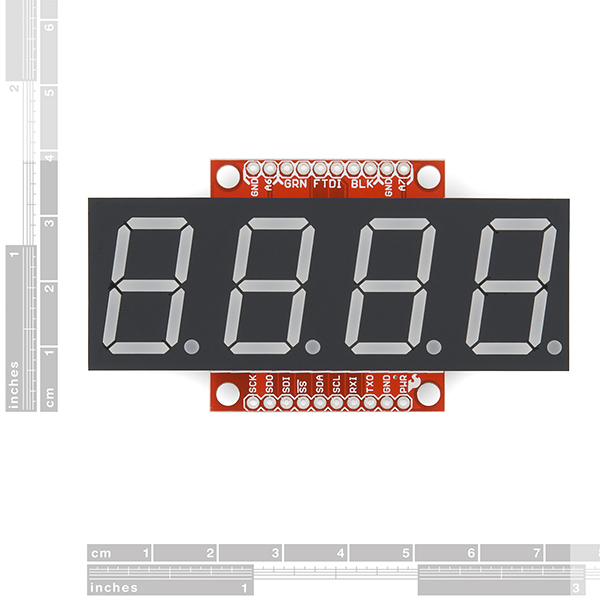 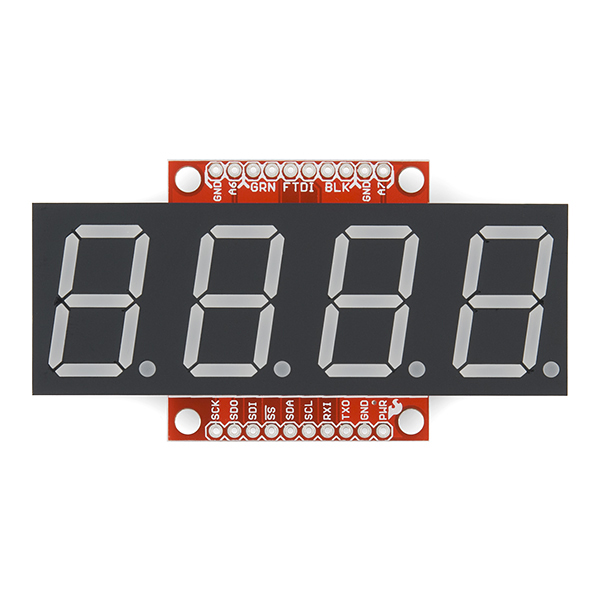 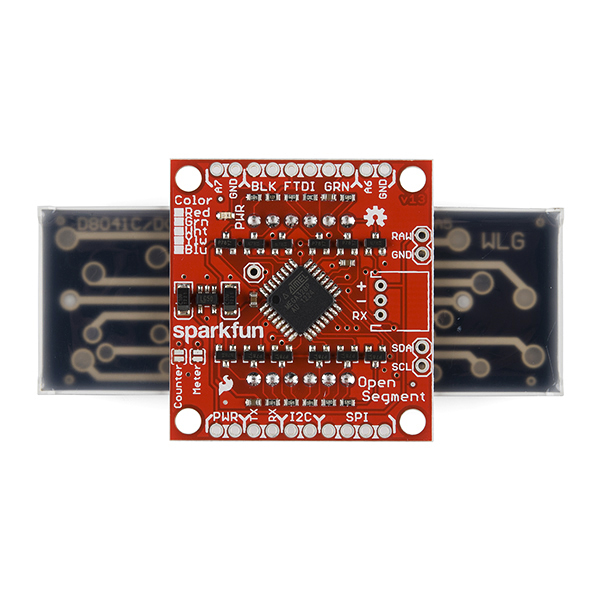 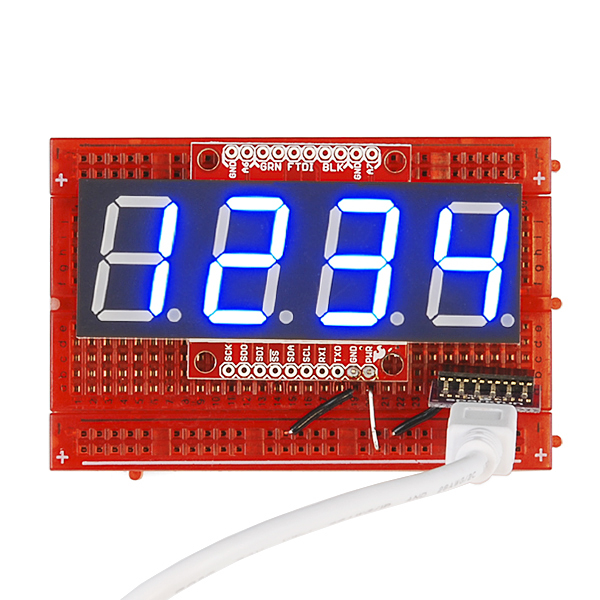 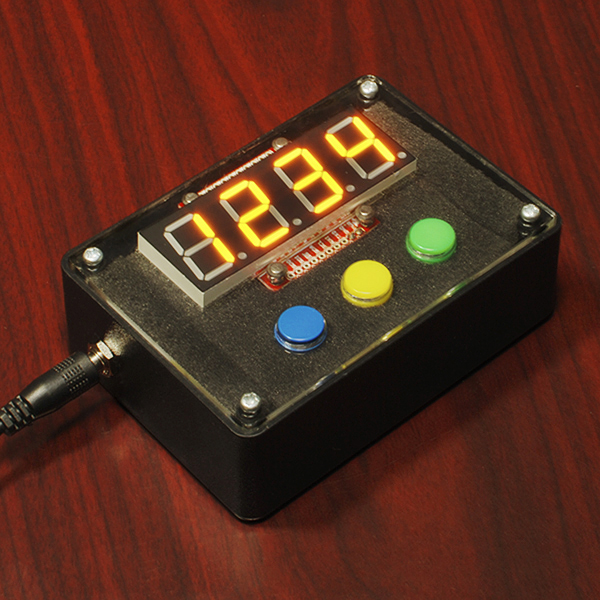 Retired COM-11647 RoHS Open Source Hardware
3
Note: Retired Product
This product has been retired from our catalog and is no longer for sale. This page is made available for those looking for datasheets and the simply curious.

OpenSegment makes it easy to add a large 7-segment display to your project. Because larger 7-segment displays pull more power than a microcontroller is able to drive directly, the OpenSegment has 8 PNP and 4 NPN transistors in order to drive the segments at their maximum brightness!

The on-board ATmega328 receives data over multiple digital interfaces (such as TWI, UART and SPI) and does all the PWM and upkeep of the display so your main controller doesn't have to. There are even two built-in functions that can be activated with solder jumpers. The counter function simply counts up or down, incrementing when you pull down SDO and decrementing when you pull down SDI. The meter function gives you a voltage read-out of the ADC!

OpenSegment runs at 5V and uses a standard FTDI connection for programming. The board is pre-flashed with a bootloader compatible with the Arduino Pro Mini @ 8MHz setting under the Arduino IDE. This firmware is an updated version of the Serial 7-Segment firmware designed to run on both devices. The commands will be largely the same except, of course, that this display only has decimals and no colon. See the datasheet for the Serial 7-Segment below to get an idea of the serial command set.

about 6 years ago by Member #701481 verified purchaser

I purchased this display to make a clock. I have it connected to a Raspberry Pi A+ using SPI. It works great. I'm using Derek Scholten's Python library (see the link below).

I didn't notice that the display did not have a colon for time. It's not a deal breaker, but would have been nice to have.

Since the Pi can run two, I'm thinking of getting a second to display the date on my clock.

Easy to use, limited by lack of colon for clock displays

about 5 years ago by meljr verified purchaser

This is a relatively easy to use, affordable 4 digit display in a larger size. If you also have another Micro Controller in your project (e.g. an Arduino compatible), you can drive the display with very few I/O pins and have several protocols available. It has good library support and the only reason I didn't give it a Five Star review is that this display lacks a colon, which is nice for showing the time.

Easily met my needs for a bright, large format display

about 5 years ago by rmeyer verified purchaser

I needed a precision speedometer for my tractor. I had to be able to read the display outdoors in full sunlight, and the display had to show my speed in 10ths of MPH.

This display was easy to configure and communicate with. I especially found the cursor control and decimal control a must for my project (my project only reads out three digits, so I masked off the first digit and then offset the display mounting in the bezel.)

I would suggest to those who want a colon (such as for a clock display) get creative and wire in a surface mount LED over one of the existing decimals. With a little work you may even be able to grind a little trough in the face and mount the LED flush, but I have not tried it myself.

One thing to note is that the blue display I bought lacked contrast and was very difficult to see in bright light conditions. This may be the case with the other colors as well, and the effect is even apparent in the product photos. The lack of contrast comes from the fact the segment bezels are cast in a white/diffuse plastic which, in bright lighting, does not contrast much with the light from the LEDS.

The visibility in bright lighting can be vastly improved with the proper color filter. I keep a swatchbook of sample gel cinematic lighting filters from Rosco in my desk for just such purposes. I found that placing the Roscolux #4290 CalColor Blue sample between my blue display and the clear protective window I made gave me a beautiful bright, deep blue over "black" appearance, which is easy to see even in full and direct sunlight with the brightness set at 75%.

It is interesting to note that even though the filter I used only transmits 15% of the light, the portion it sends through at about 400 nm is such a good match that the display ends up appearing much brighter.

Swatchboooks can be bought for a few dollars from places such as stagelightingstore.com and others. As I said, they are handy for all sorts of optics and lighting projects and even include several frosted and diffusion type samples.

I would guess that all of these Open Segment displays would benefit from the proper filtering.

All in all, I am very satisfied with this display and I cant wait to find an excuse to use one in a future project.

I wish I could copy/paste this information in the review sections for the other colored Open Segment displays, as I think it might be useful to others, but it does not look like I can post a review without actually buying the product. Maybe if one of the SF staff sees this they can copy it over to the others??