Retired DEV-11711 RoHS In Fritzing Library 8
Note: Retired Product
This product has been retired from our catalog and is no longer for sale. This page is made available for those looking for datasheets and the simply curious. 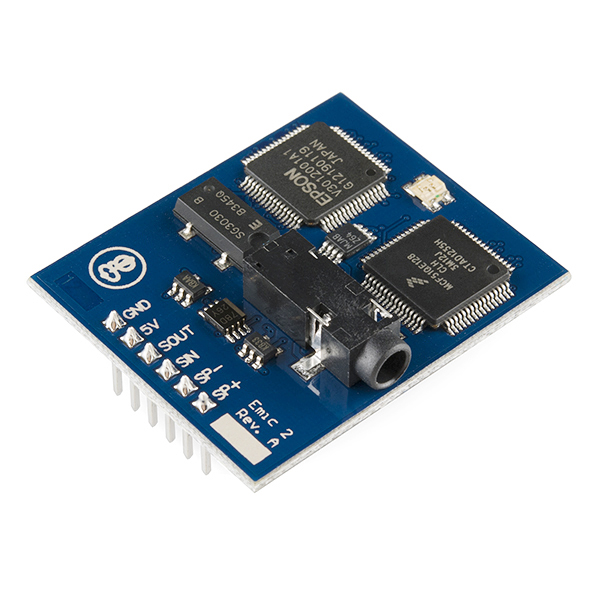 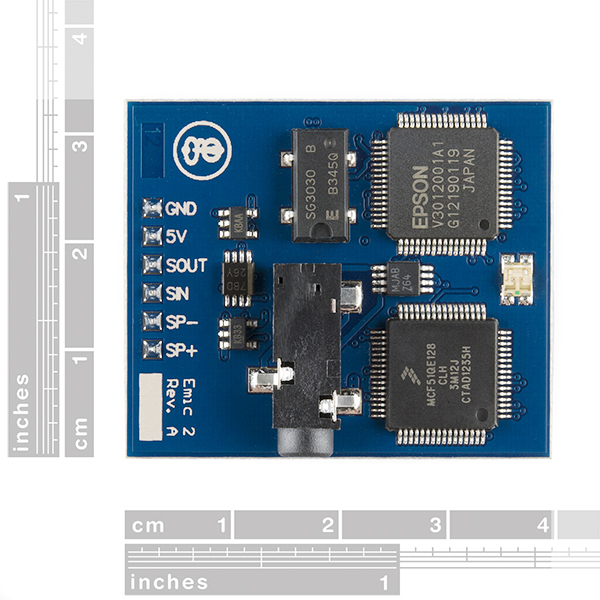 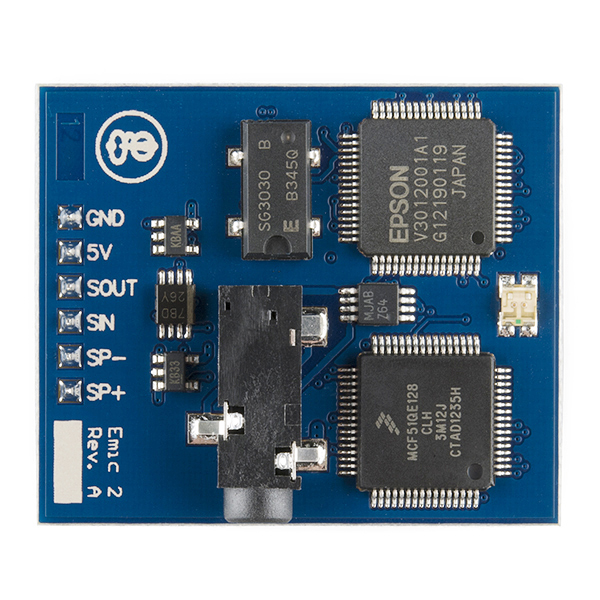 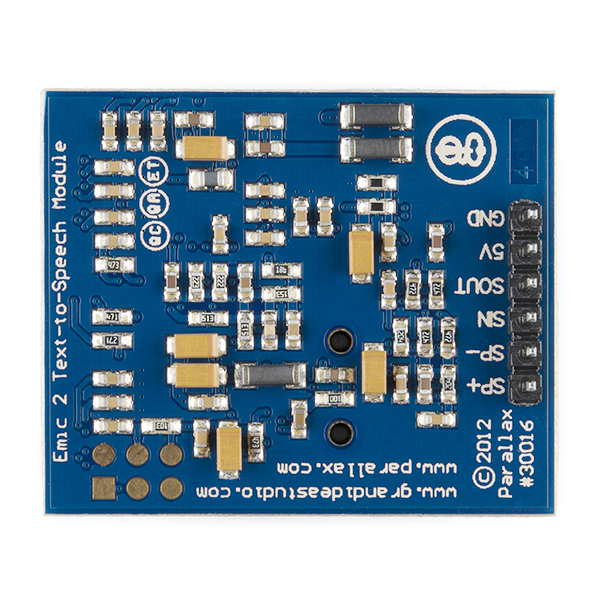 Retired DEV-11711 RoHS In Fritzing Library
8
Note: Retired Product
This product has been retired from our catalog and is no longer for sale. This page is made available for those looking for datasheets and the simply curious.

Ever wish your project could just speak up and *tell *you what's going on? Why not give it a voice? The Emic-2 Text-to-Speech module makes it really easy to give voice to your embedded projects.

The Emic-2 was designed by Parallax in conjunction with Grand Idea Studio to make voice synthesis a total no-brainer. Simply connect the Emic-2 to a 5VDC power supply, connect a speaker to the speaker output (or 1/8" headphone jack) and send it a stream of serial text at 9600bps. The module contains all of the smarts necessary to parse the text into phonemes and then generate natural sounding speech, all your controller has to do is send serial strings.

The command set for the module is entirely comprised of ASCII-based printable characters and allows you to change languages (English or Spanish), change between 9 different voices, and even control speech parameters on the fly. The module also communicates back to your system so you can get settings, version information and even "finished speaking" flags back from the board.

If you've ever thought about building a robot that sings your twitter feed or wakes you up in the morning with random snippets of beat poetry, this is the way to do it!

The Uncertain 7-Cube is a non-committal, less-than-helpful, but also entirely honest fortune teller. Simply ask it a yes or no question, give it a nudge, and the 7-Cube will dutifully inform you that it doesn’t have all the facts and doesn’t feel comfortable making a guess.
Favorited Favorite 3

about 6 years ago by Member #632689 verified purchaser

I got your Emic 2 and within 20 minutes had it up and running. It's small size is misleading as it simply does the job. Looking forward to using it for Halloween.

One of the best product

about 5 years ago by Member #722199 verified purchaser

Amazing product to include text to speech in your project. Just hook up to UART and you have text to speech. No extra configuration, no extra components needed. Though female voices are not that good, but I liked this product.

about 5 years ago by Member #777818 verified purchaser

Seems i received a faulty module cause Sout doesnt work at all. Never got any ':' response. or any form of response for that matter

I'm sorry to hear you're having problems with the board. If you contact our tech support team, they should be able to help you resolve the issue.

about 4 years ago by NorthernPike verified purchaser

Do you know what a tape measure is??? Well, how about a tapeless measure??? That's right, the ultra sonic range finder gets the distance and then the Emic 2 gives it to you in nice plain English. Or Spanish if you prefer. How high is this desk??? Emic 2 says "32 Inches". It's super simple. I like it. A lot.

Great and very easy to use module

about 4 years ago by Muthanna verified purchaser

Module is very easy to connect using serial (hardware or software based) pins. I below video link you can see my demo using Arduino DUE hardware serial.

about 2 years ago by Member #145496 verified purchaser

Some words, like "four", are difficult to understand. Trying to give it phonemes to fix words that are difficult to understand does not work well. (Let me know if you figure out what to send it to get "four" more intelligible.) I estimate that at least 90% of common English words are intelligible on first hearing. If you give it a number, it translates it into the spoken number (neat). I tried different voices, and all are about same intelligibility. If you give it something else to say while it is still speaking, it discards the new message (does not stack it). You can abort the current message, wait for it to respond with a colon, then give it the next thing to speak - that works -- or sit and wait for the colon - but what if the colon gets lost? Maybe look at the status LED? The RED/GREEN LED is RED while it is speaking, but it has no output pin, so you would need to tap into it. The volume setting works great (in dB). I am driving a 2-inch speaker from the chip - at maximum level, it is loud enough to clearly hear it from up to 20 feet away. I don't know the function of the processor in front of the speech chip - is it parsing the text into phonemes before it hands it to the speech chip? I think it is. I have not yet looked at the raw serial input to the speech chip, so I don't know (yet).