Retired KIT-12848 RoHS 9
Note: Retired Product
This product has been retired from our catalog and is no longer for sale. This page is made available for those looking for datasheets and the simply curious. 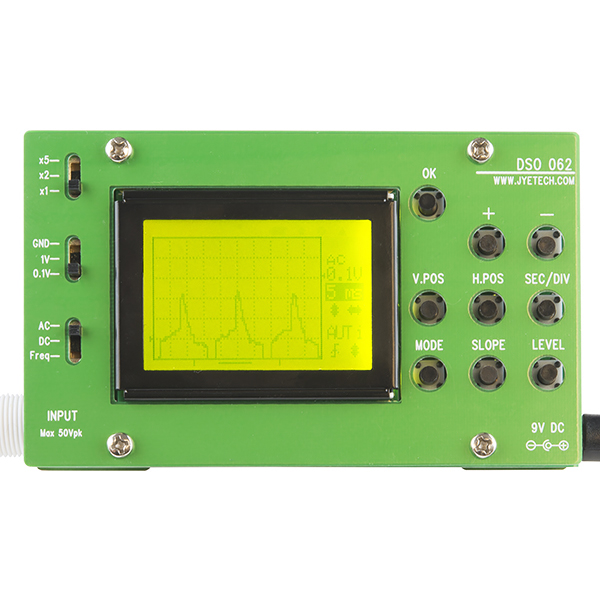 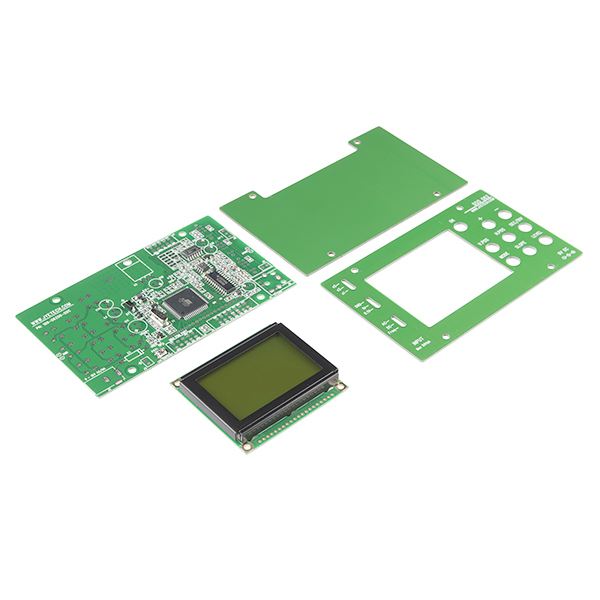 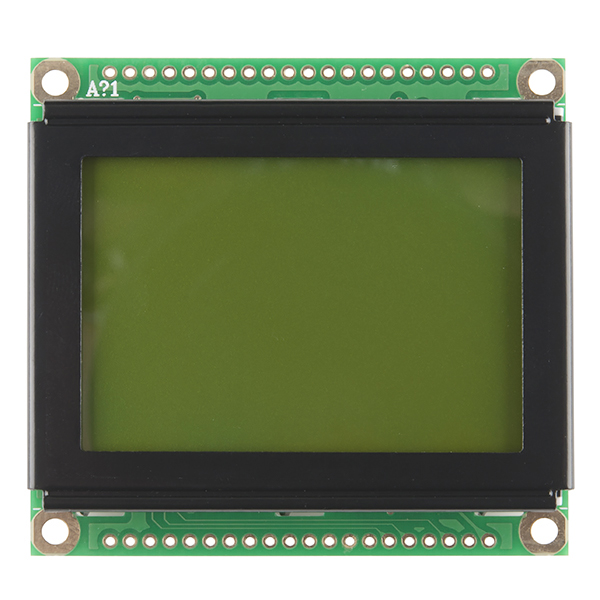 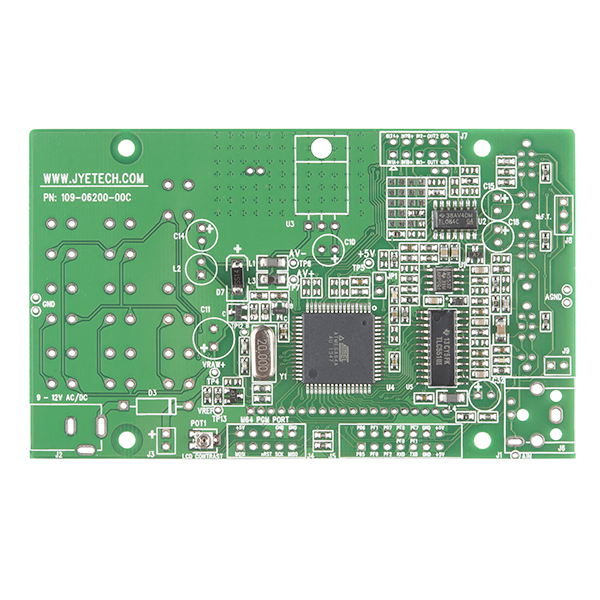 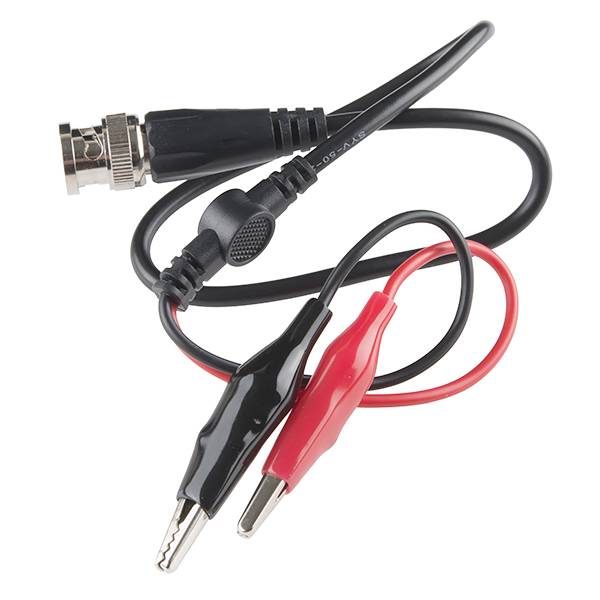 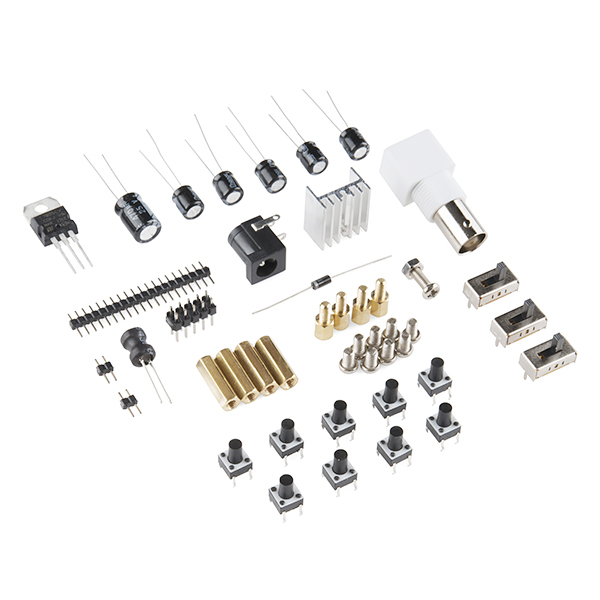 Retired KIT-12848 RoHS
9
Note: Retired Product
This product has been retired from our catalog and is no longer for sale. This page is made available for those looking for datasheets and the simply curious.

This kit includes everything you need to build your very own, fully functional, digital oscilloscope. Once you've got it up and running, the oscilloscope features up to 5M samples/second, 8-bit resolution, up to 50Vpp max input voltage, and more!

This kit includes a semi-populated PCB, with all of the surface mount components already soldered on for you. The components left for you to solder are all through-hole. This is on the higher end of difficulty as far as through-hole kits go.

This kit pairs nicely with our BNC Probe Kit! A 9V power supply is required to run the oscilloscope; supply is not included.

How to Use an Oscilloscope

How to work the dials and buttons on an oscilloscope, and a glossary of the o-scope lexicon.
Favorited Favorite 39

If you are having issues where the LCD backlight does not light up and you cannot see anything on the display, try looking at this troubleshooting guide by JYE Tech.

about 7 years ago by Member #659391 verified purchaser

The kit arrived well packed. It took roughly an hour to solder in parts. The documentation is good and easy to find. I have owned many Textronic scopes over the last 55 years but donated my last one to the ham club here. Then I needed a scope. For my use it is great, takes up very little room and is easy to use. Whether it is a first time scope or if you have used one for years, this is a good portable, fun tool. Bruce KT4ET

about 7 years ago by Member #670452 verified purchaser

Was a fun kit to assemble and performs as advertised and expected. Would've been nice to have a power supply included but no problem. Overall I'm satisfied.

Well Worth The Price And Effort

about 7 years ago by Troy Johnson verified purchaser

The instructions are excellent and the testing along the build process is great too. Some of the soldering is trickier, requiring some patience and a good soldering iron, but most of it is not too bad. Expect to be carefully adjusting the contrast of the screen at the end: it is only visible in a small range of the adjustment screw, so be patient there as well. In the end you'll have a useful little tool. Much thanks to the Customer Service people at SparkFun as well, because I have yet to have an interaction with them that doesn't make me a happier person.

about 7 years ago by Member #356699 verified purchaser

I think the product is fine. Works well, easy to use. However I paid $79.95 for it from Sparkfun and on the documentation sheet it came with was an address for support at jyetech.com. When I went to that website I found the same oscilloscope on sale for $49.00. Needless to say I will not be buying from Sparkfun again without doing much more research. I feel ripped off! Update: After seeing the above review, I received an email from Sparkfun giving me a $20 credit matching the price I originally paid with the current price. I consider that very good customer service and am changing to 4 stars. Would be 5 except there is no case which would be nice. And it's still $10 cheaper at Jyetech.

Hey there! I'm sorry about the inconvenience - please keep an eye out for an email from me addressing this. :)

about 7 years ago by Jasmine2501 verified purchaser

I did some videos about this kit, showing how to use it and detailing the build. I hope you find it helpful. This kit requires intermediate soldering skills.

How To Use This Scope https://www.youtube.com/watch?v=ZwvjVlGbkSI

Looking at RC Signals from a Quadcopter https://www.youtube.com/watch?v=y6OZMhDg3OU

Cool videos, thanks for sharing!

Great project, but watch the price.

about 7 years ago by Member #538511 verified purchaser

A cool little project. The build wasn't bad, probably a little much for a total beginner but I don't remember there being any highly aggravating components. A few close and tricky places you have to get a little creative with iron placement, and places where there is a pretty tight pin pitch (display board). Watch the build video posted, I agree his order of soldering is superior to the provided instructions. I had to adjust the heat a few times as well for places where there is a large thermal mass vs other places with smaller components I wanted to protect. You probably have to at least half know what you are doing.

I find I am grabbing this thing first when I need to measure simple signals (checking PWM circuits, basic PS ripple, etc...) because it's small and handy enough I can just leave it out on the bench most of the time. I am going to use a 9V battery with a jack to power it remotely and use it for automotive troubleshooting and remote signal testing. It is handy to turn the timebase down and use it to watch signal voltages over time (better than my CRT scope in this regard). It is also a noticeably cleaner signal (at smaller voltage ranges) with the battery vs using the recommended 9V adapter, but I was not getting any major 60Hz harmonics through the power supply, which is nice.

The FFT and frequency finder are pretty nice bonus features, but don't seem to like picking up low frequencies as easily and requires a very distinct signal with little distortion/interference (as I would have expected). I've noticed a few bugs and display glitches, but nothing terrible that isn't usually fixed just by recycling settings or something. One minor point is that the largest you can get is 5V divisions and with 6 divisions you can show a max of 30V spread on screen at once, even though the unit is rated 50Vpk. So it technically has a range of 100V (+/- 50), but you can only show 30V of the waveform at once.

However, like the other poster, I will have to concede although it was a fun project that I enjoyed and will probably get some decent use out of, IMHO it was definitely not worth the $79.95 I paid for it a few months ago. For a smaller price I would do it again, but I could have nearly bought a much more functional and ready-built DSO or a much better featured kit from JYE for what I paid (not sure what I was thinking at the time).

about 6 years ago by Member #400531 verified purchaser

Nice kit. Soldering is a bit challenging making sure it is a good connection without making solder bridges. Need a small soldering iron and steady hands. Finished scope works very well with no problems.

about 6 years ago by Member #761890 verified purchaser

As usual with Chinese kits and instructions translated into English, they can be a bit confusing and a few steps are deleted. The manufacturers should have an English technician check the instructions for clarity to remove any confusion.

about 4 years ago by votsek verified purchaser

My 15 year old granddaughter did most of the soldering on this. We are using it as a part of a science fair project that uses PWM. There are two soldering challenges. First, the caps can be difficult, but we followed the advice of another person that was to do the switches and buttons first. Second, the headers on the display are tricky and I recommend plugging them into a female header when soldering to keep the pins aligned. The assembly and user instructions are adequate. Very pleased with the quality and the results.