Retired TOL-13882 RoHS Open Source Hardware 8
Note: Retired Product
This product has been retired from our catalog and is no longer for sale. This page is made available for those looking for datasheets and the simply curious. 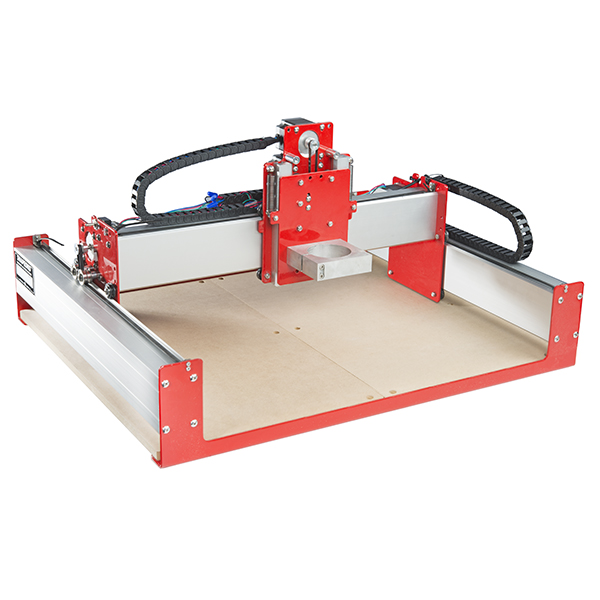 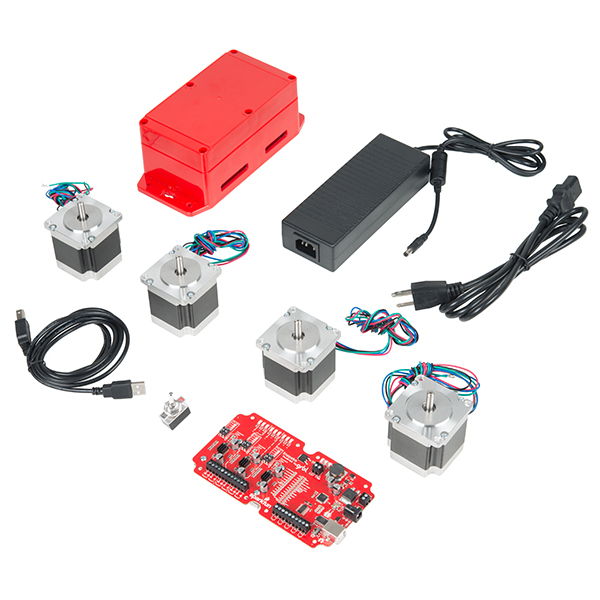 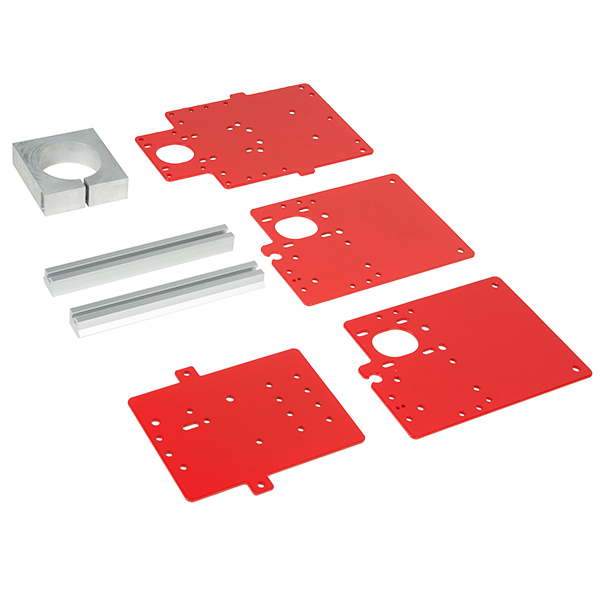 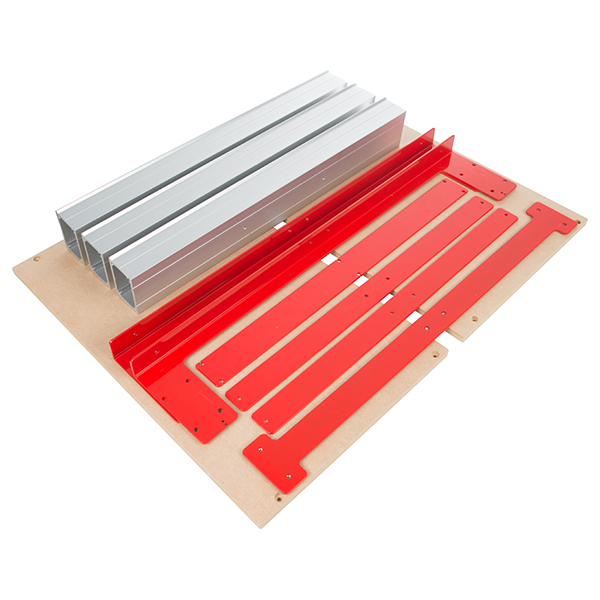 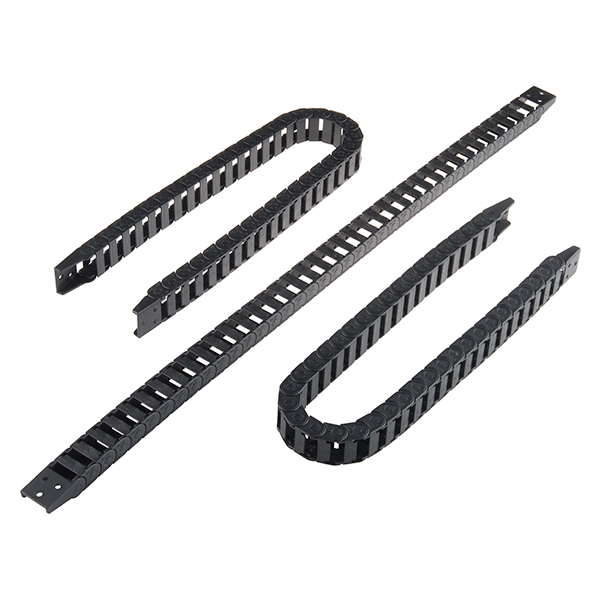 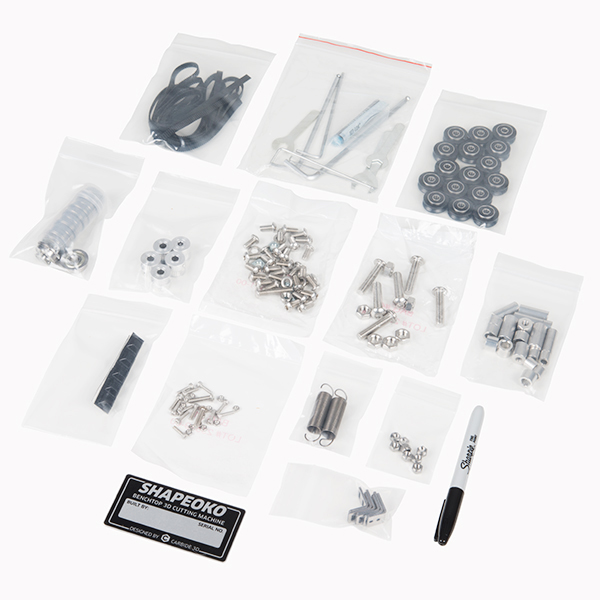 Retired TOL-13882 RoHS Open Source Hardware
8
Note: Retired Product
This product has been retired from our catalog and is no longer for sale. This page is made available for those looking for datasheets and the simply curious.

This is the Shapeoko Deluxe Kit, a desktop, 3-axis CNC Machine kit that allows you to create your 2D and 3D designs out of non-ferrous metals, hardwoods, and plastics. This special SparkFun Edition of the Shapeoko Kit includes everything from the base frame and hardware to the motors and SparkFun Stepoko controller. This is an entry-level CNC machine designed for hobbyists, artists, and fabricators! The only thing that is not included is a trim router which can be purchased from most hardware stores or online retailers.

The included SparkFun Stepoko is an Arduino compatible, 3-axis control solution that runs grbl software and is able to connect to your computer to accept stepper motor commands. The Stepoko's design and firmware are completely open source and it works with an open source Java based cross platform G-Code sending application to translate commands. Don't worry, we've designed the Stepoko to be as simple to use as possible. With it being pre-programmed grbl software and the installation of the Stepoko consisting of just plugging the stepper motors in, connecting it to power and to your computer you'll be amazed by just how simple this board really is! To top it off, we've designed the SparkFun Stepoko to fit and be secured inside of a custom Big Red Box for an effective enclosure option that allows access to all of the boards connectors and a spot for the massive heatsink to rest in.

The new revision of the Stepoko board updates the firmware to the latest version (0.9j). We've also added a piece of thermal gap filler to help electrically insulate the board from your chassis and prevent problems from ESD. Finally, we added three cable carriers to help get your cabling under control.

Note: The power cable included in this kit is designed for the United States National Plug Standard. If you are purchasing this kit outside the US you will need to use or buy a power cable that fits your country's standard.

Note: Please keep in mind that the Shapeoko Deluxe Kit Assembly Guide in the Documents section below lists items for the Carbide3D version of the complete Shapeoko kit, not the SparkFun version. Be sure to reference the hard copy guide that comes with your kit when ordered.

Note: This item is non-returnable. If this item arrives damaged or is not functioning properly, please do not hesitate to contact us to see if further actions may be taken.

A step-by-step guide to cutting and engraving a coaster with the Shapeoko.
Favorited Favorite 3

A guide for attaching the Stepoko Add-on kit to a Shapeoko Mechanical kit.
Favorited Favorite 3

Additional information about the stepper motors used in this kit can be found here for specs and a 3D model => https://sparkle.internal.sparkfun.com/sparkle/storefront_products/13656#tab-support .

You can now use Carbide 3D's software with SparkFun's Shapeoko board. You just need to provide a SparkFun order number and that will get you an activation code for their software for the Shapeoko. Contacting Carbide Support [ https://www.shapeoko.com/wiki/index.php/FAQ#Carbide_3D_Software ] is the easiest way to go about obtaining that code.

One of the cooliest things I've ever owned

about 6 years ago by Stevie Rox verified purchaser

It's been a learning process but I've enjoyed working with all aspects of CNC machining. I've had set backs and success. It's a great machine and hope to continue learning all the basics and tricks.

about 6 years ago by Member #428214 verified purchaser

May Be Better Off Buying the Carbide Version

about 6 years ago by johnelle verified purchaser

Also this uses the Sparkfun controller which according to support is not upgradable. The Carbide edition can be upgraded and they evolve their free CAD/CAM software with the new 1.1 version of grbl which is being released. Also the newest UGS provides access to the new Jog features in grbl 1.1.

After using it for two weeks I learned that the Carbide kit contains the limit hardware and all the tutorial directions published by Carbide assume that the HOME feature is working. Although you can band-aid it onto the Sparkfun unit, I bought the Carbide add-on kit because it contains all the hardware needed to mount the limit switches. This is fairly important functionality for all except the most simple projects.

If I had it to do over again I would buy the Carbide version because its their main product as opposed to Sparkfun which doesn't seem all the eager to support this $1000 piece of equipment. The techs are nice but unfortunately they can't keep the product up to date.

Per the comment about me being "unique"...well I guess we are all unique but I was asking support about standard features of grbl. Turns out it is pretty easy to reflash the board. Why they told me it can't be done...who knows. An even bigger mystery is why my stepoko controller chokes on the $h command which is an extremely important command in grbl. Still waiting for answers on that one.

I'm sorry we weren't able to support your case better. A number of our technician's attempted to assist, but your case was unique. Our support team is happy to help with issues that we can.

Works great; could use some updates

about 6 years ago by cjbaar verified purchaser

First off I have to say I am very impressed with the precision of this CNC unit. Given that many commercial models (even small ones) go for many thousands of dollars, I wasn't sure what to expect from a DIY model. However, I have found that the stepper motors are quite accurate, and the results are very repeatable.

I was slightly disappointed to see that the "official" Shapeoko kits have been shipping with limit switches for the last year or so, but these kits do not. It would be nice if this kit had been updated to match.

Also, SF woud do well to publish their own assembly manual. The original is often short on details, skips over steps, and contains misprints and simply inaccurate information. The most major issue I have found is that on page 18, the stationary Z-axis pulley appears to be installed backwards. When I installed it as shown, the belt doesn't line up with the motor or idler pulley, and after only a few uses I noticed fraying on the edges of the belt. Reversing this pulley (gear teeth away from the plate) solved the alignment issues.

about 6 years ago by Member #432784 verified purchaser

I am an international customer and it arrived very fast and in perfect condition. great quality at an affordable price . I can finally make so many things I have always wanted to. perfect companion to my 3D printers. well done Sparkfun.

about 6 years ago by Member #526146 verified purchaser

So, the title says all the good. Here are my quibbles. Sparkfun's edition differs from the Carbide 3D version in a few places. Mostly involving the electronics. However, finding the instructions involved watching videos and scouring the web for tips, as opposed to downloading an instruction supplement PDF. Second, wiring the twin Y-Axis motors into the Stepoko board proved impossible as it was suggested. Even with the most careful twisting and tinning of the wires, I could not get them to fit into the terminals. I used spare wire to create a splice that fit. Even the Sparkfun's Assembly video shows wire nuts in the tangle of excess wire, so I don't feel bad about it. And it works.

Once built, I've only had 1 issue, and that is keeping tension on the Z-Axis belt. By using a screw and round threaded standoff that's inaccessible, I can't get enough torque to hold it in place reliably.

All that said, with careful construction, and calibration, this thing is great. It has, in just a few uses, upped the quality and complexity of my projects.

about 5 years ago by Member #813835 verified purchaser

This little cnc machine is great for small wood or plastic projects and probably aluminum but I haven't try that yet. The only change I would like to see is maybe have two sets of terminals for the left and right Y-Axis motors instead of both motors sharing one set of terminals.

The machine was pretty easy to install and everything worked on the first try. It is very precise and extremely easy to use.

It would be good if Sparkfun provided their own manual instead of relying on the one from Carbide 3D since there are some subtle differences that had me scratching my head a couple of times.

Many of the screws have a tendency to come loose, so make sure you use the supplied locktite. This wasn't mentioned in the referenced docs from Carbide 3D, so I found out about that at the very end.

The nuts holding the stepper engine is hard to get to, and the bolts seem to have a bit soft metal, so some of the heads are in bad shape. It would be good to see a little bit higher quality bolts and perhaps a specialized tool to keep the nuts from turning, you can't really get to them comfortably using a monkey wrench.

I went with the Makita CNC router, and since I read that the Carbide version comes with an adapter for the Makita I thought I was fine. It turns out that Sparkfun doesn't supply this adapter ring, so I had to order it from Carbide. Only 15$, right? Well.. Another 57$ in shipping to get it to Norway. That sucked, but in the end I still have a very solid CNC machine which is definitely worth the money and then some!

Do yourself a favor and buy homing/limit switches at once, you won't regret it!