Retired SEN-14632 5
Note: Retired Product
This product has been retired from our catalog and is no longer for sale. This page is made available for those looking for datasheets and the simply curious. 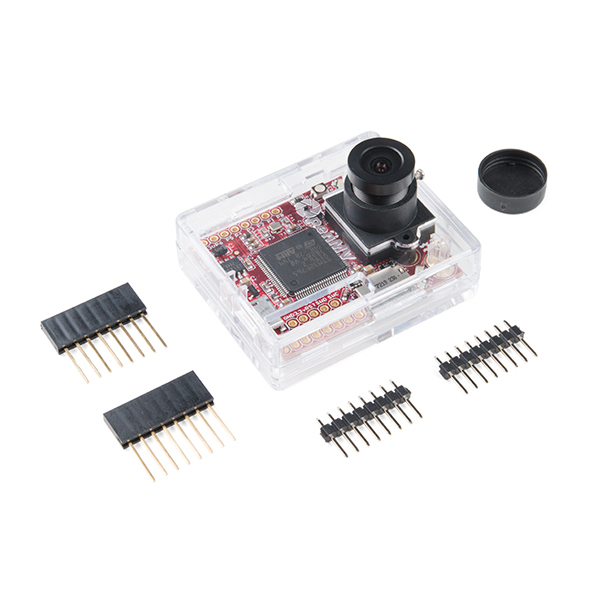 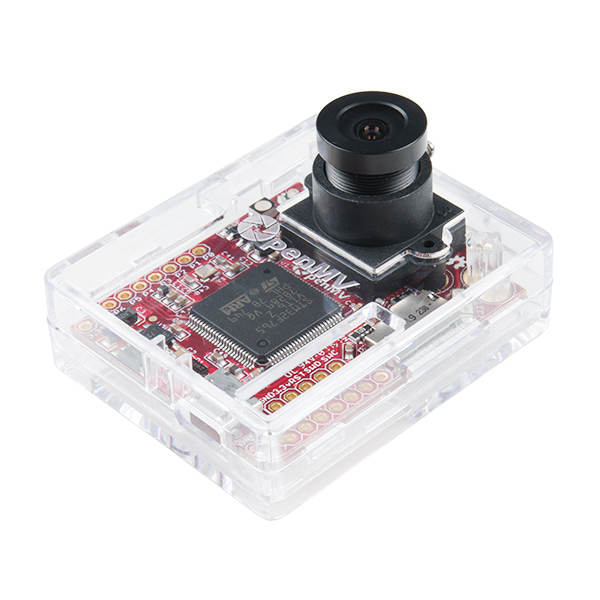 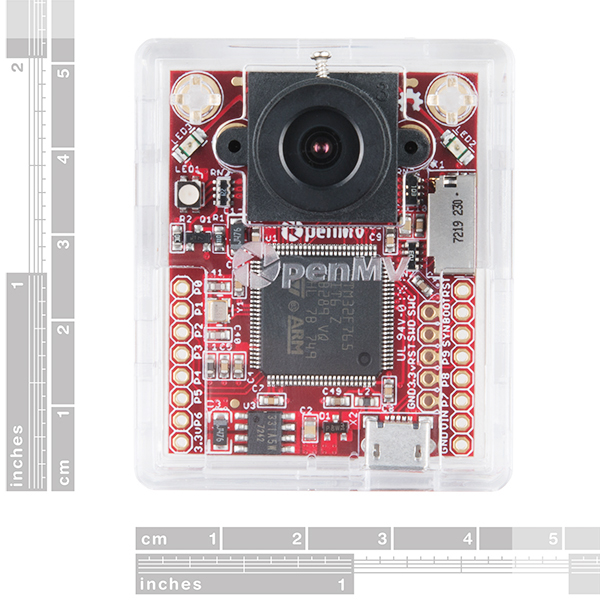 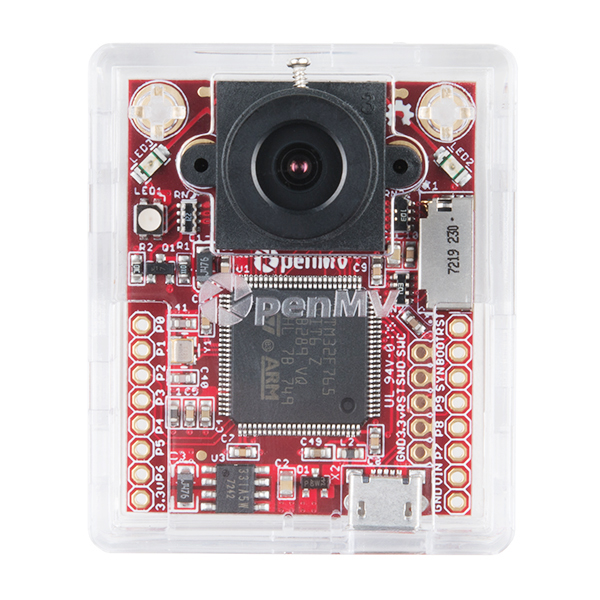 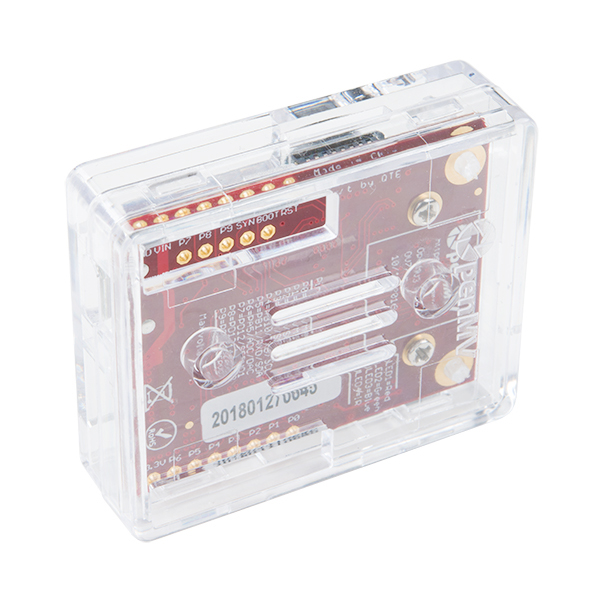 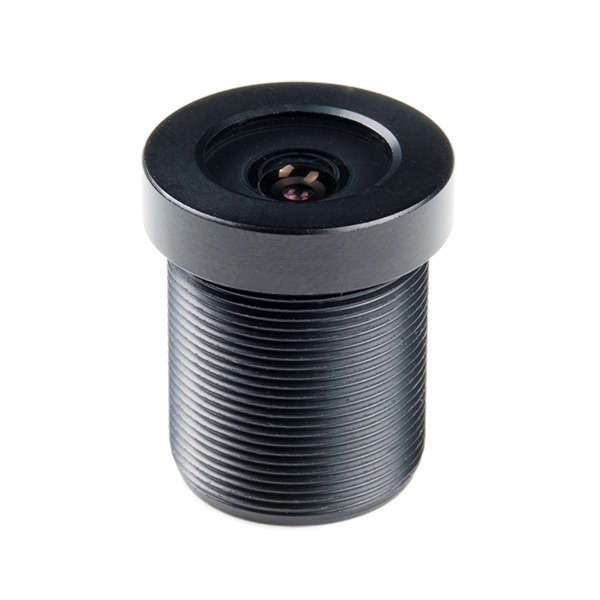 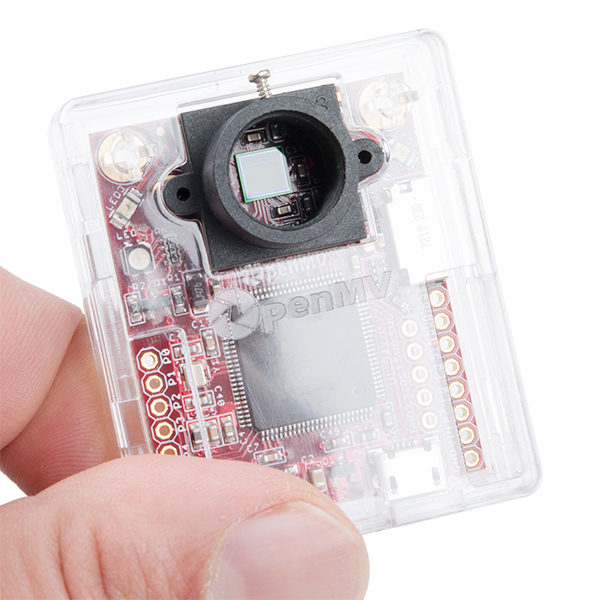 Retired SEN-14632
5
Note: Retired Product
This product has been retired from our catalog and is no longer for sale. This page is made available for those looking for datasheets and the simply curious.

The OpenMV M7 Camera is a small, low-power microcontroller board that allows you to easily implement applications using machine vision in the real world. The best part about the OpenMV is that it is not only capable of image capture, but also face detection, color tracking, QR code reading and plenty more. If you are looking for an economical camera module boasting multiple high-end features, look no further than the OpenMV M7!

The OpenMV can be programmed in high-level Python scripts (courtesy of the MicroPython Operating System) instead of C/C++. This makes it easier to deal with the complex outputs of machine vision algorithms and working with high-level data structures. You still have total control over your OpenMV M7 and its I/O pins in Python. You can easily trigger taking pictures and video on external events or execute machine vision algorithms to figure out how to control your I/O pins.

This version of the OpenMV M7 Camera has a few new changes for you! Each version of the OpenMV now comes equipped with a handy protective acrylic case and has also removed the pre-soldered headers from the board. Instead, you now have the option between normal male headers (like the ones found on the previous version) or female stackable headers, allowing you to decide how you use your own OpenMV!

about 5 years ago by denbo68 verified purchaser

The OpenMV camera is great if you want to make a micro controller see. I've used it with Arduino and it works quite well (it has an issue using an NXT as it tends to hold the clock line down for 4 seconds... still debugging this). The camera can be either an I2C master or slave or it can talk SPI if you need it to.

The IDE and the sample code is really great. The M7 runs micropython and you edit and upload the code from the IDE. The IDE also has a video pane to show what you are seeing and if it is properly executing your code. It's quite well thought out. For sample code there is face detection, line tracking, and even a Pixycam emulator (over i2c). It really is a good product.

That said there are some caveats.

First... this isn't OpenCV. Codewise it looks similar but there are a lot of features just not there. Say you want to do OCR training using KNN. Pretty simple thing to do in OpenCV but it doesn't appear to be possible with the OpenMV.

Second... performance can be slow depending on what you are doing. A Raspberry Pi 3 running OpenCV will run faster face detection. You get much better throughput. Now the maker of OpenMV comes right out and tells you this on the Youtube videos but I wanted to make it a point here as well... don't expect extremely fast performance.

Third... upgrading firmware... the upgrade is fast but the self-test after is extremely slow. It doesn't happen often but when it does it is terribly slow.

That said... this is a great way to make something like an Arduino see.

Very easy to get familiar to the CAM and the IDE. It comes with the software reach of examples. Excellent support on the manufacturer website forum.

Great but needs some more libraries and algorithms!

about 4 years ago by Member #619095 verified purchaser

Works great out-of-the-box and easy to program. Let’s you get going quickly with a useful subset of OpenCV on a low-power, low-cost, embedded platform. Well done! I just wish SparkFun also carried other types of lenses and wi-fi shield.