Retired SPX-14804 RoHS Open Source Hardware 5
Note: Retired Product
This product has been retired from our catalog and is no longer for sale. This page is made available for those looking for datasheets and the simply curious. 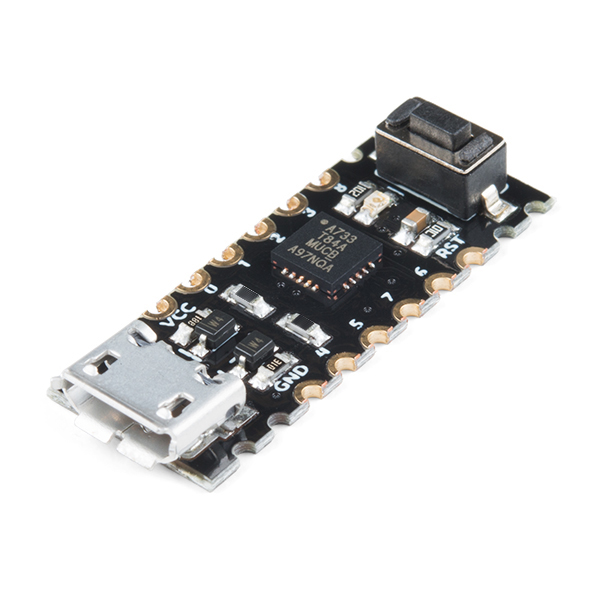 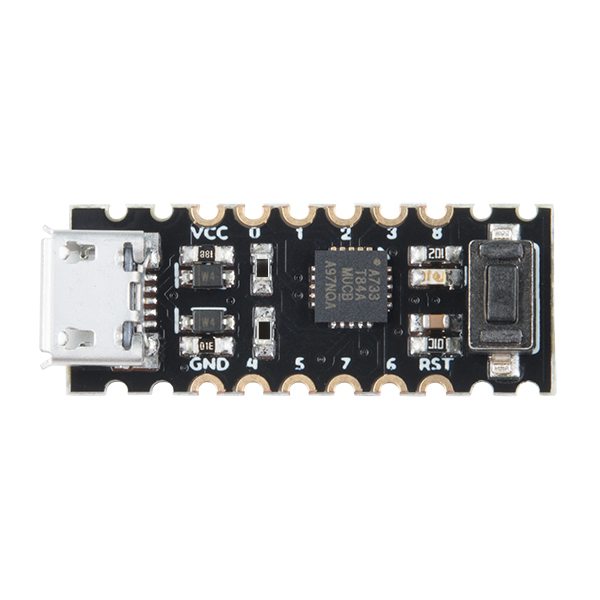 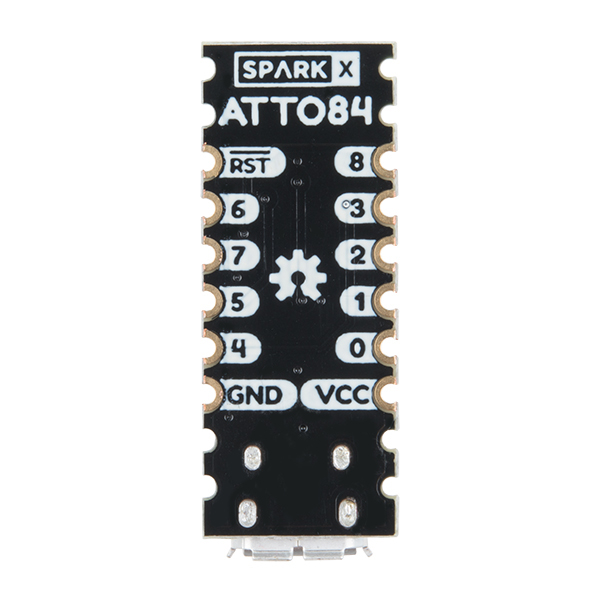 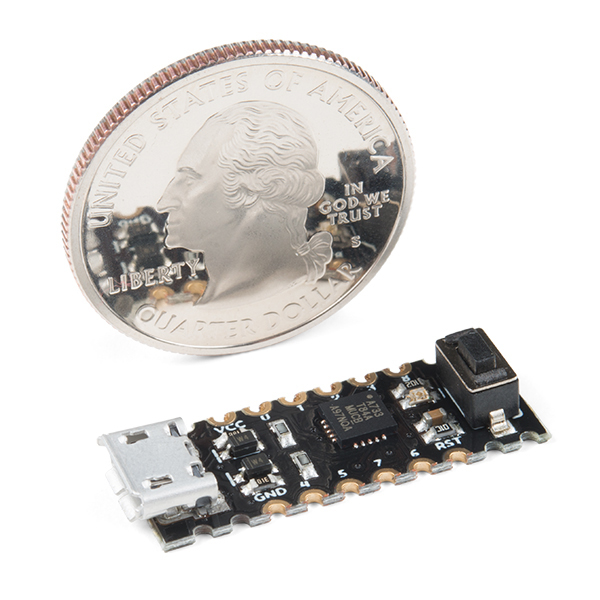 Retired SPX-14804 RoHS Open Source Hardware
5
Note: Retired Product
This product has been retired from our catalog and is no longer for sale. This page is made available for those looking for datasheets and the simply curious.

Arduino and Arduino compatible dev boards are an awesome tool for developing an idea quickly but, being development boards, they're often a little more bulky and full featured than you really need. Having a USB interface and a bootloader is so nice, though, so we put together the bare minimum Arduino compatible breakout for integration into your small projects. We call it the Atto84.

The Atto84 is essentially a breakout board for the absolutely minute WQFN ATtiny84, but we've done some work to make it easier to program. First off, we've added a micro-USB connector and a firmware-based USB driver for the ATtiny that allows you to program the chip over USB. In addition, we've created an Arduino board profile that combines this bootloader with an extremely full-featured ATtiny Arduino core.

Simply install the USB drivers on your computer, select the board profile from Arduino's Board Manager and upload code to this board like any other Arduino style development board.

There are very tiny silkscreen pin labels on the top of the board (which correspond to the Arduino pin numbers, not the IC pin numbers) and larger labels on the bottom side of the board. A reset button allows you to put the board into bootloader mode for programming and an on-board LED attached to pin 8 makes for a handy status indicator for your project. Thin pcb construction and castellated headers make the Atto84 very low-profile but the addition of 0.1" pin headers turns it into a handy, breadboard-friendly, package.

Powerful, easy setup if you follow the instructions, works as advertised

about 3 years ago by Member #356017 verified purchaser

Works well with the ardo IDE, the installtion is straightforward by the instructions.

The Tiny series of controllers can probably do what 90% of people do with the more elaborate microcontrollers.

Downsides: Fiddly castellated headers, personal pref here. 5 second wait time for programming and boot up gets old, it would be nice to have control over how long that takes. No obvious way to control the clock speed that I could find.

about 3 years ago by Member #858972 verified purchaser

It seems to work fine. It'll be handy for tiny projects with limited space.

I made an Eagle library if anyone wants to use the Atto84 in their projects. https://github.com/BipeFlyer/SparkFun-Eagle-Libraries/blob/master/Atto84.lbr

Worked as well as I could expect

about 2 years ago by Member #667626 verified purchaser

I bought a couple of these in order to write some ATTiny84 I2C demonstration code. Mostly worked perfect. When using USI the thing works great. Doing bit-banging I was able to get an I2C controller (master) working just fine, even dropping into AVR assembly I was unable to get peripheral (slave) mode working. Man, if these things ran at 12 MHz instead of 8 MHz, I probably could have pulled it off. No fault of these devices though.

Not sure why people have problems with the castellated connections. I just stuck some headers in a wireless breadboard and soldered them right on.

Yeah, the 5-second boot up is a bit too long (two seconds would probably have been sufficient). But it is what it is and that's not hard to get used to.

Would love to see a faster part (12 MHz or better). Then again, it's six bucks. Can't really expect it to perform like a Teensy.

I purchased 2 of these, both seem to be defective. They say no guarantees or support in the description, lesson learned. I hope you have better luck.

about 2 years ago by Member #86811 verified purchaser

I received 2 of these some time ago. I was surprised to see that it was castellated. I inquired about how to connect it and what to connect it to. To date I have received no reply. They remain unused.