The Piezo Drum Kit gives you the sensors to turn virtually anything into a five-piece drum kit. In the past I have used these piezo sensors to rig up my desk and couch to play sounds when people interacted with them. This guide is a simple introduction to working with the piezo elements. Once you are able to detect voltage levels from the piezo sensors, you can use them to trigger sounds, turn things on and off, start your car, etc. The possibilities are endless. We call this the drum kit because we first used it to generate drum sounds using an Arduino and MP3 player shield, but it could be used with any other hardware that requires percussive velocity input.

Along with everything inside the kit, we will be using these items in this guide:

First, let's talk about the two main components of the kit. The first component is the piezo element itself. The piezo element has two leads, and when the pad is pressed, the element generates a small voltage across its leads. Piezo elements come in lots of shapes and sizes, but the ones in your kit are well-suited for detecting a hit or finger press.

The other main component of the kit is the bag of 1M Ohm resistors. These are used in parallel with the piezo elements as pull-down resistors to ensure a good read of the voltage produced by the element. If this doesn't make sense now, don't worry, it will be explained further later.

In this guide we'll be using an Arduino Uno for the example code, but this kit could be used with any device that can detect a small (less than 5v) voltage in an analog fashion.

How to Use it

Out of the box, our first step is to wire a resistor to the piezo element. We could simply jam the resistor and piezo element leads into the Duemilanove's female headers. However, that might not form a proper connection, so we'll solder them together. If you've never soldered before, you might want to check out our Soldering 101 tutorial. 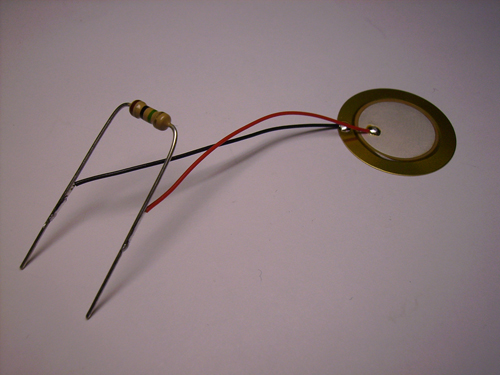 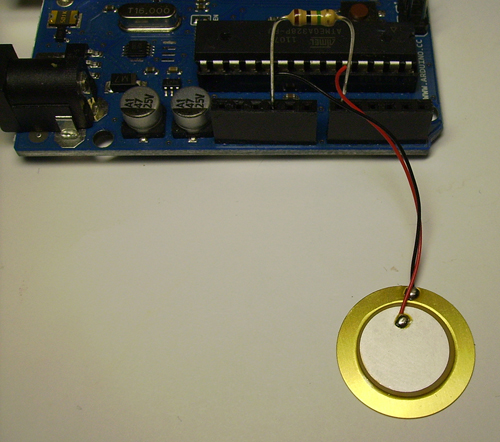 Now we can start coding. At this step, we need code that does two things: reads the voltage on the analog line, and then prints that voltage to the terminal. The following code does just that:

Copy-paste and load this code onto your Arduino. Once the code is uploaded, open the Arduno IDE serial monitor. Make sure it is set to 9600 baud. Once the board resets, the Arduino will start printing out voltage values (in this case, just an endless string of zeros, because of the 1M Ohm pull-down). 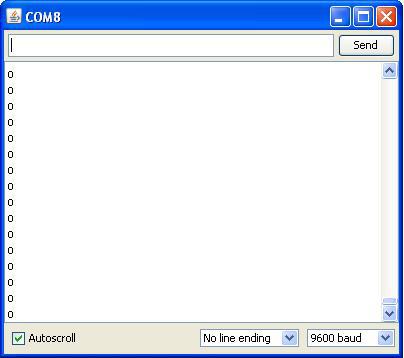 Go ahead and hit the piezo element with your finger. Notice the printed value change. Hit it lightly, and note the value registered. Then hit the element a bit harder, and notice that the value registered is higher than before. This is because the more the piezo element is agitated, the higher the voltage it produces. When applied to something like a MIDI keyboard, this is called "velocity." You can trigger different things based on whether or not the piezo element was hit very hard, very soft, or anywhere in between. For example, you could trigger a loud drum sound when the element is hit hard, and a quiet drum sound when the element is hit softly. You simply need a threshold value to distinguish between hard and soft hits. The code below sets a threshold of 200 to distinguish between the two types of hits. 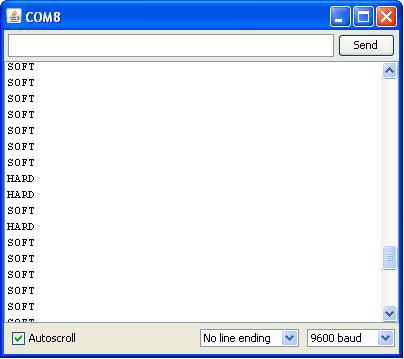 That's the basics of detecting voltages on the piezo sensors. From here, the application is up to you. Just solder together the rest of the piezo elements with resistors, and use them in the exact same way with the other analog pins on the Arduino. You can put them in anything you want to use to detect vibration. Use them to trigger sounds or lights; the possibilities are endless!