SparkFun at Make a MakerSpace, hosted by Artisan's Asylum, Part 1

In January 2013 SparkFun education and engineering went to the Artisan's Asylum in Massachusetts to offer a large amount of support for their educational track. This post is all about the event and ancillary events we did on either side of the weekend while in the Boston area.

As an Educational Outreach Coordinator for SparkFun Electronics, I have seen a myriad of different educational environments since being hired in 2010. These spaces range from traditional schools to libraries to HackerSpaces and other forms of "spaces." Schools, museums and libraries tend to take similar forms regardless of their location or the specific interests of the staff. "Spaces," however, come in a wide variety of forms and foci depending on several factors. Special thanks to Chris Connors for use of many of his photos!

By no means do I consider myself an expert on HackerSpaces and their family of related spaces, but I've had the honor of visiting and teaching at different spaces around the nation. I've also met a large amount of the wonderful geeks, freaks and uniques that belong to various HackerSpaces at events such as MakerFaires and mini-MakerFaires, robotics and educational conferences, as well as greeting some of them in classes at SparkFun's headquarters. With this exposure comes the knowledge that these wonderful spaces have popped up organically in the past when brave (and sometimes maybe a little naive) individuals gathered other like-minded people and resources to the point of critical mass. From there it's anyone's guess as to what direction the space might take. Many of them focus on computers and software, others might start with a dedicated militia of woodworkers, and I have no doubt there are probably some with a majority population of gear-heads and mechanically-minded grocers. In Boulder alone we have one called Phoenix Asylum, which is dedicated primarily to the arts, and another, Solid State Depot, which incubated in a furniture factory before morphing into a more circuit board focused environment. There are probably a couple other spaces that I'm not even aware of with completely different customs and intent. What I'm getting at is that these places are a reflection of the people who form them. 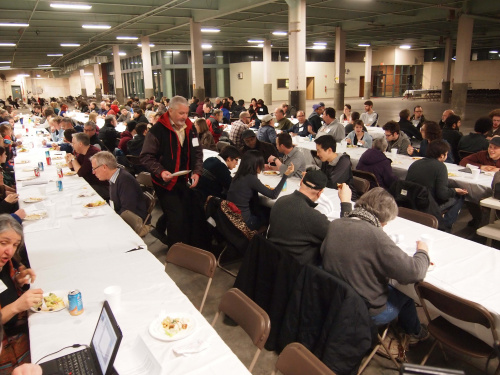 Given enough time, energy and a little organization (not too much, cuz then people don't get to work on their projects), inevitably these organizations start offering classes. It seems to be an addiction for the spaces. Sure, it might start with an innocent soldering class here or a paper-making class there, but before anyone really knows what's going on there's usually a full blown smorgasbord of classes. Instructors are so excited to share their knowledge, either for the love of teaching or due to a maniacal plot to recruit others to help with their projects, that classes happen either in an organized fashion or in a one-off haphazard manner. In my humble opinion, both are admirable and have their own benefits from a teaching standpoint. At NoiseBridge in San Francisco, I taught an organized SMD Soldering class while people pursued other forms of electronics behind me, behind them a couple people cooked what smelled like curry, and even further behind them milled a group of people from One Laptop Per Child and other local cohorts. These places allow people to explore concepts that may have been outside of their comfort zone as individuals or in a group. Due to the interdisciplinary nature of the spaces you also get a lot of cross pollination of ideas. This results in a lot of really weird ideas and some moments of fabrication genius. On top of all the diverse concepts floating around these places, the spaces themselves will often be driven by a founding philosophy or vision. These vary from Mitch Altman's "Be Excellent to Each Other", to Artisan's Asylum sprawling workspace rental growth and unofficial mascot "Stompy," the currently under-construction 4,000 lb. hexapod. 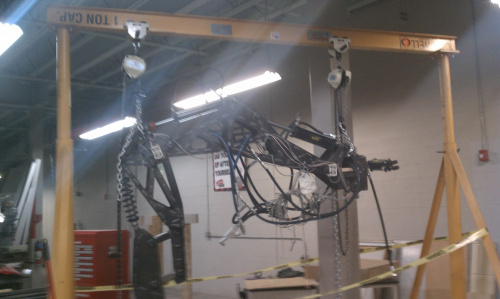 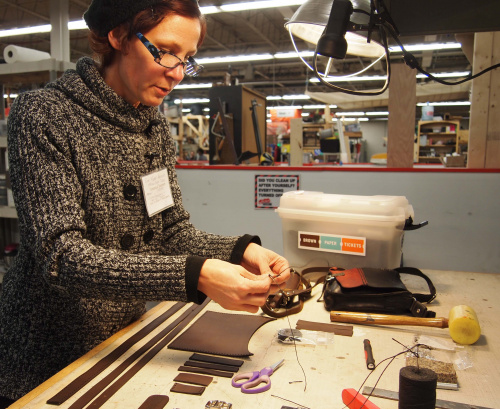 We love these spaces. They're crazy in the best way possible - kind of how we like to think about SparkFun.

So naturally, when Artisan's Asylum reached out to us about an event in early February with the help of Make Magazine to educate people who want to form Hacker and MakerSpaces, we told them we'd be there with piezo-buzzers on. I offered to conduct a workshop and bring hardware, RTFM Band-aids, three of our engineers with experience in founding HackerSpaces, SparkFun's Engineering Department and, as a prize for one of the attendees, our brand new Hack Pack. My boss, the Director of the Education Department at SparkFun, thought it sounded so awesome she decided she was up for the ride from the get-go as well. I lined up a couple other workshops and meetings on either side of the event, packed up our back-up laptops for shipping (cuz while we will troubleshoot your laptop at a class, we don't guarantee we'll be successful), booked some hotel rooms and started prepping our SparkFunions for an action-filled extended weekend.

First of all - this happened to our crate of laptops in transit to the first workshop at You-Do-It-Electronics, ironically driving home a point I would make later in a presentation about Murphy's Law. Luckily I had learned my own lesson, played it cool (kind of) and packed five laptops in my carry on baggage in an effort to roll with the punches. TSA did not like this. Apparently carrying around five laptops is pretty suspicious behavior. Luckily they were all labelled "education," and I eventually got on the plane despite some really weird looks from security and fellow passengers. 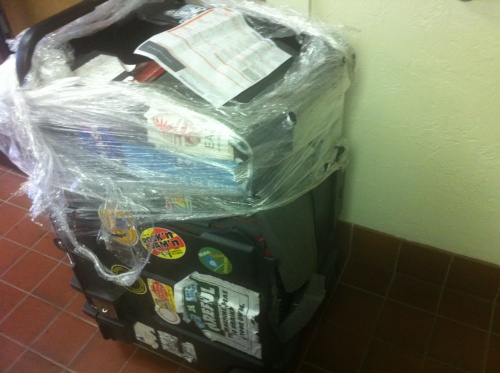 This is what happens 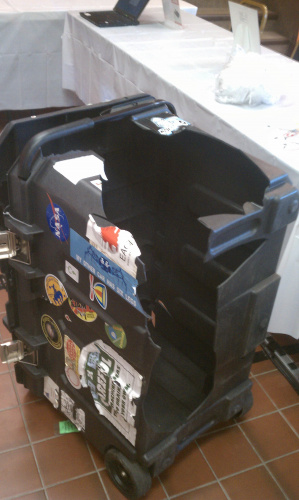 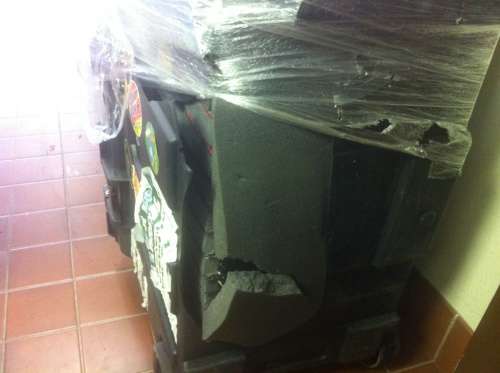 gets stabbed with a forklift. 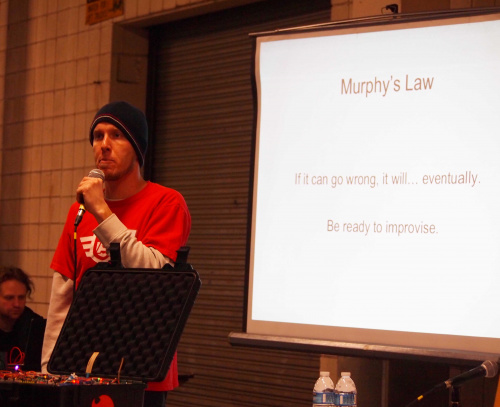 Once in Massachusetts, the engineers and I headed out to Needham to inspect damage and train the You-Do-It-Electronics staff on programming Arduinos with the ol' SparkFun Inventor's Kit. Amazingly enough not a single laptop was damaged! The crate was kaput, but the contents survived the forklift stabbing unscathed. Friday morning the other Funions went to the Boston Science Museum while I visited Gann Academy to talk about how students can really push their interest in robots to the next level. 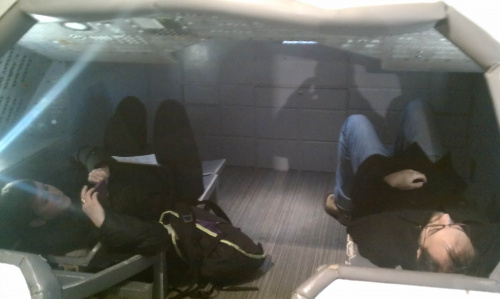 SparkFunions hanging out in the Boston Museum of Science

That afternoon we all headed back to You-Do-It and taught another workshop for their customers. You-Do-It-Electronics has been providing electronics to professionals and hobbyists since 1949, so the attendees were loyal customers eager to sink their teeth into Arduino and some electrical circuits. I was pretty pumped to see a full house with a couple of young kids in the back of the class. 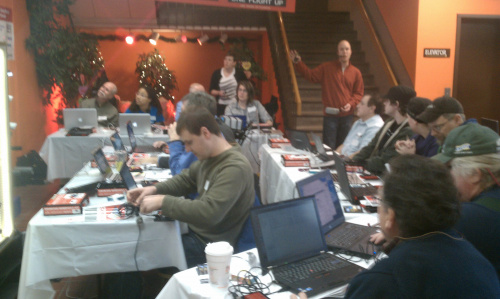 The next day, Saturday, found us Funions in a large warehouse with people from all over the nation and a few from elsewhere on the globe. Everyone present was intent on the same purpose: to gather as much information as possible about what it might take to start a MakerSpace or HackerSpace in their city, town, library or school. Make a MakerSpace was underway! 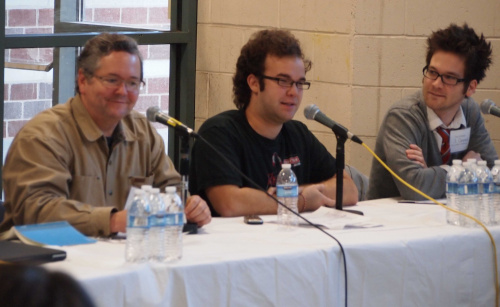 I had signed up to help out with documenting the first day of the event, so I helped set up a camera and got to work at the first panel taking notes on someone else's laptop. This particular panel was all about identifying and rallying your community. The speakers came from various places such as Make Magazine, Olin College, TechShop in California, the City of Somerville (where the event took place), i3Detroit and, of course, Artisan's Asylum. Representatives talked about their respective organizations and how to leverage community interest into action and physical space. The general consensus amongst the speakers was that it's best to attract smaller existing communities that might be interested in the larger umbrella community that Make and spaces help create. Dale Doughtery explained the MakerSpace initiative and welcomed everyone to the event. HackerSpace representatives such as Matt Oehrlein from Detroit talked about slowly working up to a larger and larger HackerSpace, in contrast to Gui Cavalcanti's experience with the quickly growing and massive Artisan's Asylum. Jim Newton from TechShop, also in Detroit, expounded on the benefits of having corporate sponsorship to build a space. TechShop was originally founded as a for-profit but switched to non-profit as it is a better fit for their intended goal. Apparently somewhere around two-thirds of HackerSpaces are non-profits. Stephen Houdlette explained how the city of Somerville views Artisan's Asylum and how it is in the interest of cities and towns to support spaces as they pop up across the nation and the globe. The panel also touched on subjects such as how to attract a youth population, how to continue to be creative when all your time is taken up with space-founding logistics, and the creative, interdisciplinary nature of non-traditional teaching environments - I found Ben Linder from Olin particularly insightful when it came to this last topic. If you haven't checked them out, Olin was actually founded on the premise of an interdisciplinary approach to engineering in 1997. They produce engineers like Gui and show up at events like Make a MakerSpace. Very cool. 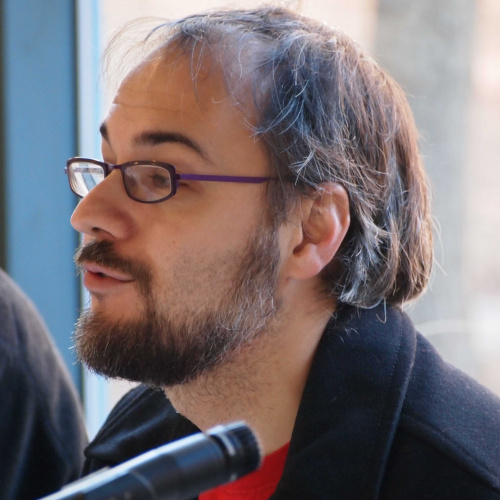 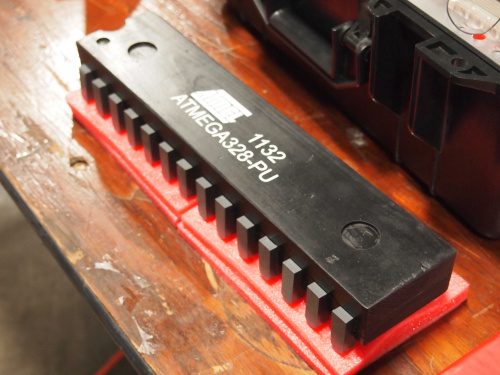 The event was well-attended. I also took notes at the panel on Special Topics in MakerSpace Education. Among the key concepts that I heard driven home over the weekend were the importance of fair, critical and forward thinking governance, making sure bureaucratic stuff like inspections and finances are well taken care of and how important initial culture is when consciously forming a space or community. You have no clue how important this last one is. Look at SparkFun - Nate is more of a cat person than a dog person, but having dogs at work helps support his initial vision, wants and needs for his workplace. Did he think he was going to be employing thirty to forty dogs when he started? No. Does he think it's awesome now that it's happened? Yes. The lesson I heard was dream big at the beginning... before you know any better. Check back soon for part two of the event!

SparkFun at Make a MakerSpace, hosted by Artisan's Asylum, Part 2