Check out these projects using the Wake on Shake board!

Today is the first edition of a new homepage series. We spent hours brainstorming a clever name and finally settled on (drum roll, please)..."Engineer Thursday." Ok, so we wanted to keep it simple. But from now on, each Thursday we will have a post from a resident SparkFun Engineer. Today's post comes from our own Mike Hord - check it out:

A few months ago, we released a new product, the Wake on Shake. Based on a concept originally developed by Nitzan Gadish, an applications engineer at Analog Devices, the Wake on Shake is a low-power board that sleeps at a very low current (less than one microamp) until it's moved, at which time it turns on an additional circuit, which can be anything the user wishes. 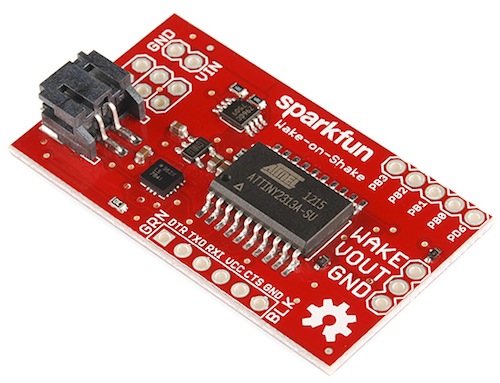 It's not just motion that sets it off, however - by adjusting the sensitivity, different types of interaction with the board will wake it up. If the sensitivity is turned way up, taps or bumps can activate the board. Turn the sensitivity way down, and it becomes a tilt detector.

We've been having a lot of fun with it since its release; e-textiles expert Dia and I each did a fun project using the Wake on Shake. Here's a short video showing what we did:

Dia's project uses the Wake on Shake with a LilyTwinkle and four LEDs to make a twinkling night sky that activates when it's touched. Because of the low power consumption of the Wake on Shake, the painting can hang on the wall for months before needing to be recharged. We've tweaked the sensitivity to a point where all it takes is a gentle touch to activate it; we had it turned up higher, but found that when the level was low enough for a bump on the wall to set it off, the vibrations from the HVAC system turning on and off were keeping the lights on too much of the time, killing the battery! 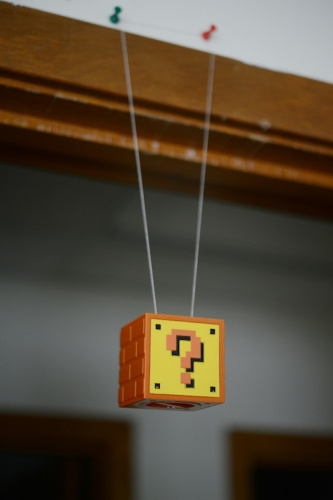 My project uses a toy bank I got at a small Minneapolis kitsch store a few years back. It’s shaped like the iconic "?" block from the original Super Mario Bros. game that shipped with the original NES back in '85. Using the Wake on Shake with its default settings, an Arduino Pro Mini, and our small Audio Breakout Board, I taught my Mario block to give me a satisfying "ka-CHING" whenever I (or anyone else) bump it on the way into my office (it’s hanging in my doorway). I stuffed a little 850mA rechargeable LiPo battery into it, and that kept it running for over five months!

Since the release of this board, we've been thinking of this type of item’s potential. What kinds of input would you like to be able to use to activate your products? What can you build with a board that can sit dormant for months without needing to be charged?