The AVC Is Less Than Two Weeks Away!

Be still, our hearts...the AVC is rapidly approaching.

As May draws to a close, it can only mean one thing - and no, it's not the return of your Aunt Edna's famous potato salad (the one with the little pieces of bacon in it). It's almost time for the Fifth Annual SparkFun Autonomous Vehicle Competition.

Today, we have a few reminders, updates, and tidbits to go over, as well as a Q&A with Wayne Holder and his daughter Belle, SparkFun AVC competitors and father/daughter duo extraordinaire. But first, if you want to attend the AVC as a spectator, please go to our EventBrite page and register. It's free, only takes a minute, and will really help us out! Now, for the nitty-gritty: 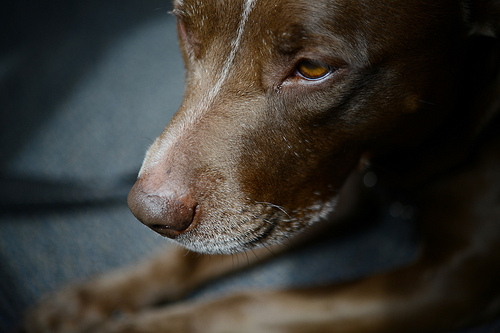 Harley says, "Please don't bring me to AVC. Getting kicked out will be humiliating."

There will be no dogs allowed at the AVC. Besides the fact we have found dogs often think autonomous vehicles are actually just particularly feisty chew-toys, dogs are not allowed at the Boulder Reservoir at all. So don't bring Poochy - he will get tossed. 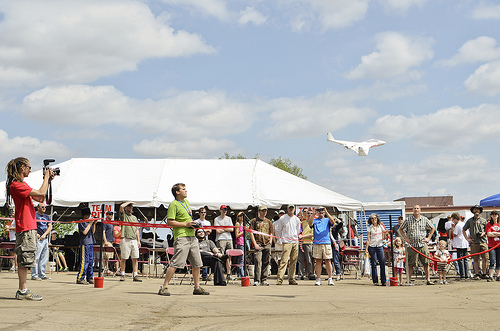 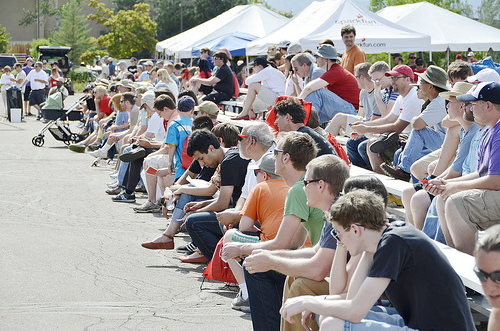 Third, here is the official schedule for the day. This is subject to change, but at this point, we'll try really hard not to do any last-minute switcheroos: 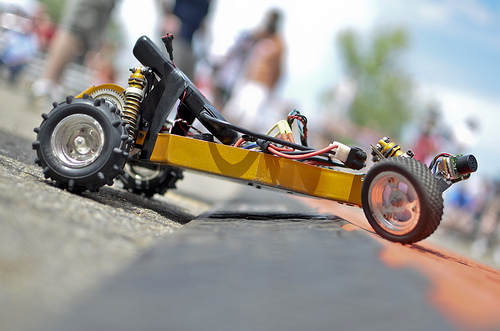 Lastly, we know we are having some out of town folks head in for the event, so we've set-up a public tour schedule for those who want to see the behind-the-scenes action at SFE HQ. Here's the schedule:

If you’re interested in one of these tour times please call 303-284-0979 and ask to speak to Amanda Clark to get signed up!

To top it all off, here is our Q&A with Wayne and Belle Holder, the awesome father/daughter AVC competitors:

What is your background and how did you get involved with electronics?

Wayne: I got started with electronics as a kid reading Popular Electronics and, in particular, articles by Don Lancaster, whose minimal style I've always admired.  I'm self taught, but I had a knack for it, so I was able to get work as an electrical engineer for many years (right on the edge of the IC revolution) because I'd studied CMOS technology and knew it very well. I was then able to get started in the founding days of microprocessor-based design using some early Intel chips, such as the 4004 and 4040.

Has Belle always showed an interest in this type of material or how did you introduce it to her?

Belle: YES! Robotics and mechanical thing have always interested me.  Ever since I was little I loved assembling and disassembling things.

Wayne: Belle always seemed to have a bit of a knack for mechanical things, which I tried my best to encourage by letting her take things apart, or suggest things she might find interesting to take apart.  One year we sent her to a summer camp called Camp Invention where the kids took apart old appliances and then used the parts to build various creations.  After that I taught her about circuits and got her some of your early wearable LEDs and coin cell batteries and that really seemed to click, as she'd taught herself how to sew at an early age.  Then, when she was about 8, or so, we started having wacky invention contests, such as who could build the best board out of stuff left over after a picnic.  Then, a bit later we discovered Maker Faire and we both felt as if we'd finally met people just like us.

Tell us a little bit about your entry for the SparkFun AVC? What kind of platform did you use and what electronics are on board?

Wayne: The SparkFun AVC is a special event for my daughter and me because, in an effort to show her that being smart could be fun, I took her to see the first two Darpa Grand Challenge events.  We were able to meet people on the teams and they would explain to Belle how their vehicles worked and she seemed to understand.

We have two vehicles this year as Belle wanted her own car.  Her's is named QED after the Latin expression you write after a proof, quod erat demonstrandum.  She's been learning trigonometry this year, which is really at the core of making a GPS-guided vehicle, so it gave me a chance to teach her a little math-based programming, too.  My vehicle is named Johnny Five after the robot in the Short Circuit movie.  Johnny Five raced last year, but this year I've designed and built my own IMU board and several other custom PCBs to streamline the design.  The core CPUs are an Arduino Mega and my custom IMU uses a Mega32U4 chip with LSM303DLHC magnetometer/accelerometer and L3GD20 gyro.

Have you and your daughter done any other electronics projects? What is the robotics kit you were showing off at Maker Faire?

Wayne: Belle loves to build stuff and I do my best to feed this desire by getting her the proper tools to work with.  She has a Hakko soldering iron, which I bought for her after she learned to solder at the SparkFun booth at Maker Faire several years back.  Belle was born near Halloween, so her birthday is always Halloween themed and one year when she was in elementary school, she wanted me to make her an animated cake decoration.  So, I used an ATTiny and some servos to make a skeleton that popped up from a grave (there's a crude YouTube video of this here). Later, she wanted to build these decorations herself, so I refined the servo controller into a form she could build and use, so that's what we showed off this year.  In fact, we set up a Tindie shop to seek the kits at tinkerdad.com and have sold quite a few, so far.

How has SparkFun helped out with you and your daughter's journey in the DIY electronics field?

Wayne: First, SparkFun really helped me get back into electronics after I had shifted away into programming as my profession.  I like programming, but building something real and concrete is so much more satisfying.  I think I started buying from SparkFun just a few years after you first opened for business and especially loved the breakout boards because they gave me a way to experiment with devices I'd otherwise have written off.  It's still mostly a hobby for me but, because of the boost I got from SparkFun, I've started to design more complex projects and have gotten fairly good at PCB design, again.  And, as side benefit, I've been able to help my daughter with her projects, which frequently feature stuff we get from SparkFun.  At the moment she is really enchanted with EL wire.

Anything else we should know?

Wayne: Speaking as a parent, I think it's really important for kids to actually build things, not just focus on abstract knowledge.  For example, Belle was able to explain electrical circuits to her HS physics class when virtually all of them were clueless about this basic skill just because she'd had experience with your sewable LEDs.  Belle is also Junior Level I certified in high power rocketry, having built and flown a 4 inch diameter rocket using an H class motor (160.01-320 Newton seconds.)  She started out building and flying smaller rockets and gained a lot of skill and elf confidence doing this.  And, as a result she built the winning design for a water-powered rocket in her HS physics class.

We are extremely excited for what is shaping up to be an awesome AVC! Hope you can join us - see you on June 8th!

The Moment of Truth

SparkFun AVC 2018: Party, Prizes, and Your Chance to be Famous