In addition to the ongoing robot competition at AVC 2013, we included some carnival-type entertainment for the attendees. We rented a dunk tank, triggered it with a swiveling mallet, and challenged people to play "Trampoline Simon Says".

This year's AVC was held at the Boulder Reservoir. We knew it was going to be a hot day and we'd be in the sun for a good 8-10 hours. So we thought, "What better way to cool off than a dunk tank?!" 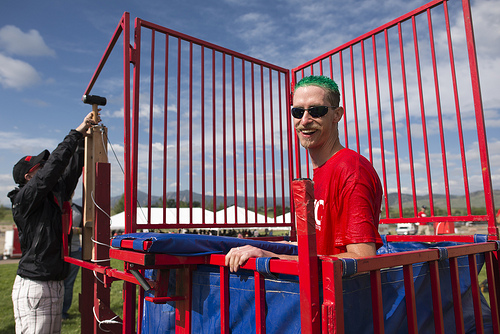 Our dunk tank idea quickly grew into a much bigger DIY hack job. We thought, "Why not get rid of the bean bags and softballs and, instead, trigger the dunk tank drop using a Simon Says game? Why not replace the buttons with trampolines?" 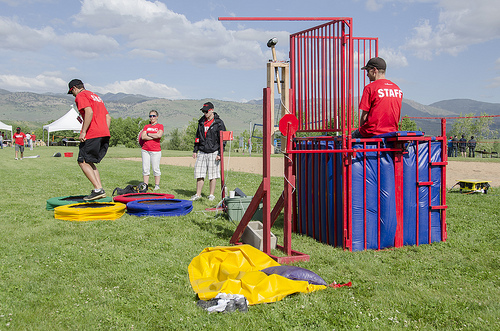 Just a few days before AVC, I ran into Nick Poole in the lunch room. In true "over the water-cooler" fashion, I asked, "Hey Nick, how's your swinging mallet apparatus coming along?"

Nick was in charge of the triggering mechanism for the dunk tank. His approach worked beautifully and had just the right amount of functionality and danger. He planned to use a heavy mallet on a hinge. It would be held upright (just slightly off of vertical) by a servo arm. When the servo arm moved out of the way, the mallet would rotate downward and seriously smack the dunk tank trigger. 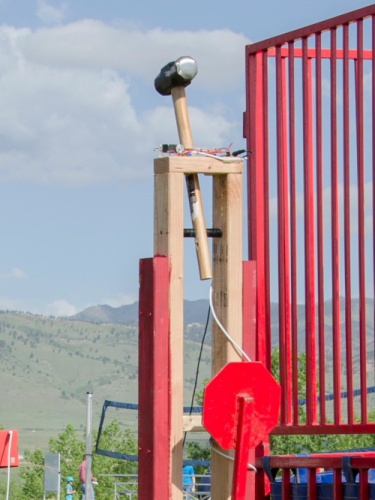 While Nick was in charge of this mechanism, I was working on a new rendition of Simon Says. I wanted to change the buttons to trampolines. This way, the player would be challenged to jump the pattern. 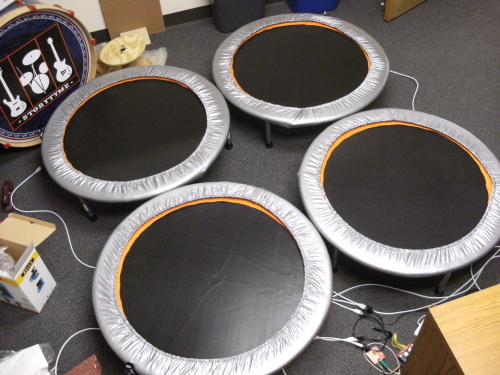 I also wanted to change the buzzer sounds into musical sounds. Ultimately, I used our Musical Instrument Shield and triggered some MIDI drum sounds. 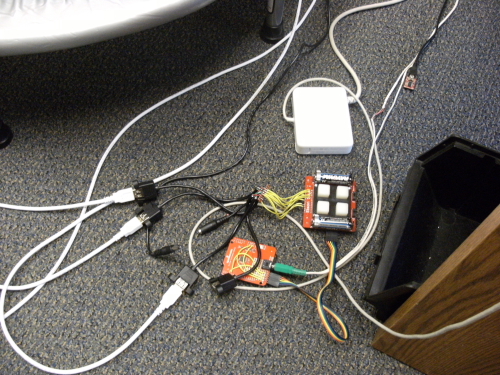 Back at the water-cooler... Nick and I discussed how the Simon Says trampoline game would communicate with the mallet trigger. We decided that a simple digital logic would be the best approach. When someone won the game, I would send Nick a signal that would be pulled low for 3 seconds. On Nick's end, he would wait for a signal to drop for at least 2 seconds. He would also use the internal pull-up resistor to keep the signal high (in case we lost connection). We thought it best to take all precautions we could. There's nothing worse than getting falsely dunked.

After we had the communication worked out, then it all came down to a little code tweaking and a ton of soldering for me and a little bit of carpentry for Nick. 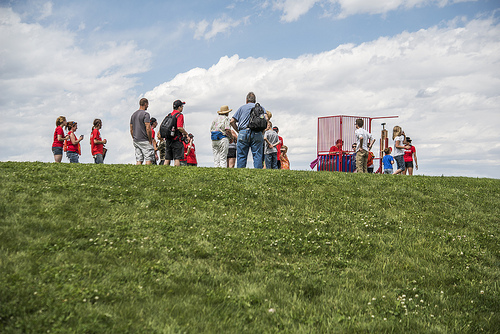 The final project turned out to be quite a success at the event. Best of all, it continued to work. Yay for successful "demo days!" All that careful soldering and hot gluing had paid off. There was a line of people all day, waiting to get their chance to dunk someone. In the morning, one of our entertainment crew members, Abbas, cruised around the grounds and politely asked people if they were interested in getting dunked. We were surprised at how quickly the list filled up. Nice work, Abbas! And thanks to everyone who was dunked. Even our very own Queso Grande, Nathan Seidle, was dunked!

Being the original engineer on the Simon Says game, Nathan told us that his splash came as a big surprise. He was expecting 13 jumps before getting dunked. The original Simon Says game required the player to remember pattern of 13 steps in order to win the game. He was totally unprepared to get dunked at just 8 jumps. Sorry Nathan, we had to modify your original code a bit. It turns out that getting to 13 jumps on 4 separate trampolines is pretty challenging!

Thanks again to everyone that came out to AVC. We hope you enjoyed the competition and extra installations. We look forward to running the Simon Jumps Dunk Tank again next year, along with any new hacks that come to mind! Anyone up for a slip-n-slide speed contest?

According to Pete - Current Sensing