Our creative technologist entered Adam Savage's Inventern contest, and got featured on Tested.com!

A couple months back, our resident Creative Technologist and compulsive maker-of-stuff Nick Poole applied to be Adam Savage's #2 guy as part of Tested.com's Inventern competition, which would fly the winner out to San Francisco for a week to work as Adam's workshop assistant. SparkFun is a big fan of Adam Savage and his projects (not to mention his enthusiasm for open source and maker culture), and Nick - whose enthusiasm for creatively technologizing borders on maniacal - seemed like a perfect fit.

When they announced the semi-finalists, it turned out Nick didn't make it into the top 10, but Adam and Co. liked Nick and his video submission so much that they featured it along with the semi-finalists' entries on their homepage! 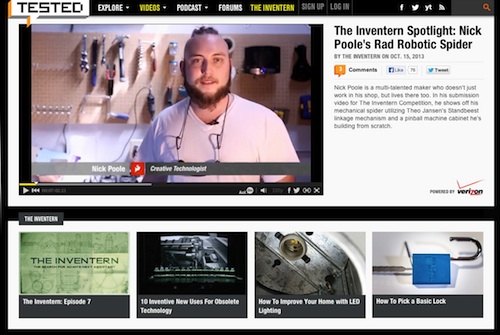 While we're bummed for Nick that he didn't get picked for the competition, we're also glad we don't have to share him, and he can continue his work on things like his homemade pinball machine and our Nerf Atrium Defense System.