Enginursday: This is why we can't have nice things

In which I buy a cheap truck, planning on using my hacking skills to keep it going, and the universe calls my bluff

Originally I planned to write a triumphant tale of hacking skills versus mechanical failure. Then, it became a cautionary tale on Reading the Manual. Now, it's simple self-deprecating humor. Have some schadenfreude.

About two years ago, I started on the Great Adventure of Homeownership. We bought a little house up the road from SparkFun in Longmont, and started in on a Sisyphean list of home improvements.

Time passed, and it became apparent to us that our tiny little Scion xA was, in no way, equipped to manage the stuff-haulage our plans called for. After a few $100 rentals of trucks, we realized buying a cheap beater truck would probably be justifiable, and I began to scrub the Craigslist for a winner. 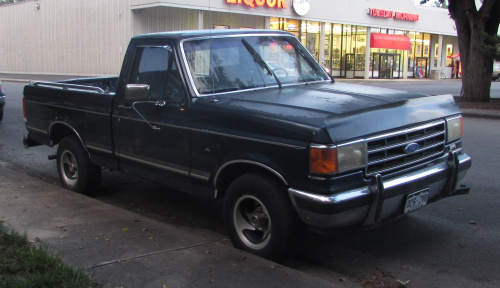 This was the result: Big Blue. It's a 1989 Ford F-150 with 160,000 miles on it; I got it for the princely sum of one-thousand American dollars (my spring bonus check- thanks SparkFun!). When I got it, one of the tiny sliding windows in the back was busted out and taped over; replacing that with a laser-cut piece of acrylic was my first truck hack.

Soon, however, a more serious problem reared its head: the windshield wipers stopped working. That's not a huge deal here in Colorado; it doesn't rain all that often and since I'm not using it as a daily driver most of the time, I can just kind of...avoid rainy days. Of course, the wipers are stuck about halfway through the cycle, which is annoying, but still, not that big a deal.

The wipers could, at first, be made to work by jiggling the switch a bit, but over time, even that failed me. This is, of course, the exact wrong problem to dangle in front of an electrical engineer. I mean, it's just a switch, right? Worst case, I pull it out and replace it with something from my junk box. A little research on the web found me this diagram of the inner workings not just of the switch but of the intermittent-control box and the motor, too.

Clearly, the switch is a little more than just a switch, and there's this magic box behind it, too, which always spells trouble. So, imprudently, I decided getting the organ in question on the bench would be the best way to diagnose the problem. 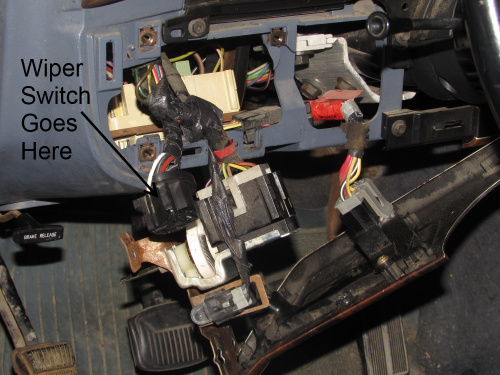 Splitting open the switch seemed like a good idea at the time, until I broke off one of the spring contacts inside the switch. Now I've committed myself to replacing the whole switch. At least I've got the old switch's connector to use and a whole bag of tricks and parts to replace the switch with. 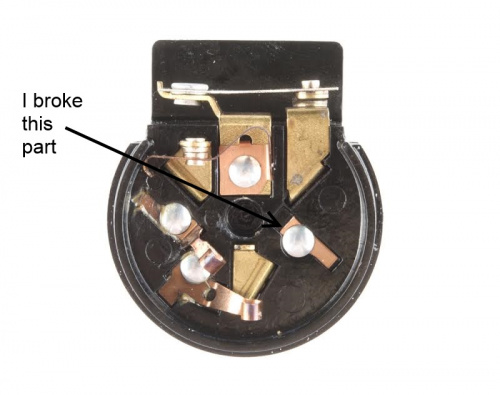 Author's note- this post was begun about six weeks ago; this is as far as I got. Originally, this was to be the point where I described the hack I used to fix the problem. 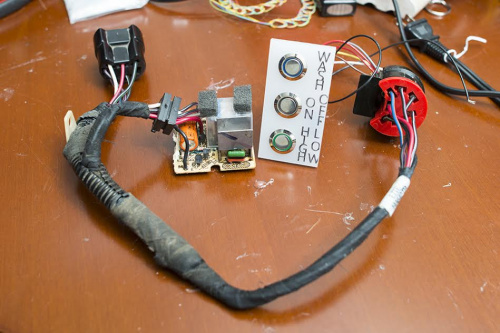 This is the nifty little kludge I put together. It replaces the original super-complex switch with an on-off button, a high-low button, and a washer pump button. Confident in my skills, I plugged it into the system, fired up the truck and pressed the button.

Well, not nothing, just not the something I had hoped for. I poked and prodded a bit, took some voltage measurements to make sure the switches that were supposed to be closed were closed, the ones that were supposed to be open were open, and that the power supply was supplying, and got a fairly unpleasant burn for my trouble. I replaced the switch with my meter in ammeter mode and discovered that 9A(!) was flowing, despite the lack of any activity in the motor!

(All this testing was going on in the SparkFun parking lot; I walked away from the truck with the door open and killed the battery, which led to an [abortive] attempt to jump the truck with some LiPo batteries.)

So now, six weeks later, my wipers are still broken, my wiper switch is shattered, and I'm pretty sure it's a faulty motor, anyway, since all efforts to fix it at the switch side have failed. In short, I probably should have just pulled out the Chilton's manual and followed the directions; that's certainly what I'll do in the future.