A look at implementing the Arduino blink.ino sketch as an explicit state machine. To further explore state machines, an alarm clock state diagram is drawn and implemented.

What is a state machine

A 'state' is the condition of a thing at a specific time. Something that can accomplish tasks and that utilizes states at its core is a state machine. They are also known as Finite State Machines (FSM), meaning that we know all possible states of the thing. The key to the state machine is the concept of time and history. The state of the machine is evaluated periodically. Each time it is evaluated, a new state is chosen (which could be the same state again), and the output is presented.

Our newly released servo trigger https://www.sparkfun.com/products/13118 is a good example of a state machine, and was developed with a similar technique. It's a switch case statement under the hood, but with accurate timing added in.

A simple state machine: The counter

A classic example of a state machine is a counter. For example, a 'for loop' or a 74x4040 logic IC both work as a state machine. Each time the machine is poked, either by the clock line or looping behavior, the state of the memory changes to a new state equaling the old state plus one. The finite set of states it can have is the numbers it can count.

A basic counter expressed as a state machine

Parts of the counter state machine:

The state machine advances at whatever rate it is serviced.

Digital logic professors love to ask test questions about Moore vs. Mealy and so I have to talk about them. I don't think the distinction makes too much sense while writing state machines in C; it's more of a "how to make logic hardware" distinction. For us, the lesson from Moore and Mealy is that people existed who thought about this stuff and invented ways of notating it. While they targeted logic hardware, we'll target c software.

Edward Moore wrote a paper in 1956 (Gedanken-experiments on Sequential Machines) and thus the style of machine is named after him. He says the output is dependent only on the state, and the next state is dependent on the current state (or output), and the input.

You can see that no matter what the input state is, the output only depends of the current state contained within the memory element.

Another guy, George Mealy, wrote a paper one year earlier than Moore, entitled A Method for Synthesizing Sequential Circuits, in which he goes into great depths about creating state machines from mathematical functions, and describes those state machine's outputs in terms of their inputs.

To diagram the Mealy machine, the output is made to depend on both the current state and the input. Here, the cloud of next-state logic contains the output logic as well:

One way of drawing a Mealy machine

It could also be drawn by seperating the cloud into next-state logic and output logic:

Another way of drawing a Mealy machine

So far, we've seen that a state machine has some memory that stores the current state, that it must have come from some state, and that it will go to the next state. Our current diagram doesn't show how it moves through states though. The goal should be to draw a map of the movement between states so we can write code that emulates our design. This is called a state diagram.

This is how I diagram the states of a state machine, using ideas from Moore and Mealy. 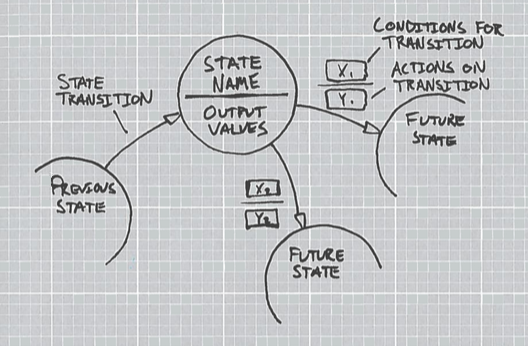 Parts of the diagram:

Always keep in mind that these are abstract representations of code and are a tool for creating higher levels of operation. Put as much detail as you need into the diagramming.

Consider a basic state that can move to a new state. 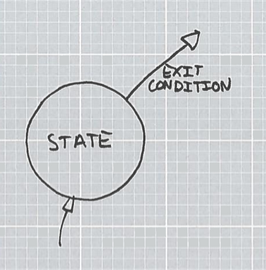 What happens if the exit condition is not met? I've cheated with my diagram and haven't defined all possible actions of the state. Often I won't quite know the full solution of my program until after the diagrams are made, and I embellish them as I go. With this diagram, I assume that if the conditions are not met, the state will go back to itself. 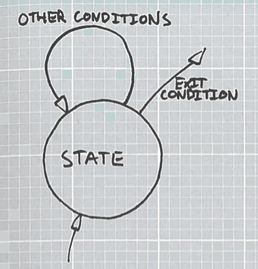 State diagram of the counter

Check out the behavior of the counter as drawn with a state diagram. 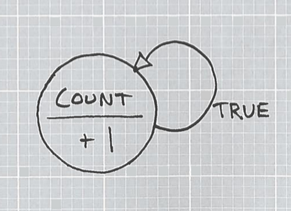 State diagram of a simple counter

Here, all possible states are represented with a single circle. The action of the state is to add one. To determine the next state, it's easy to see that we only have one option, which is to go back to the state we were in.

Let's get out of the theoretic world by re-writing the familiar blink.ino sketch with the behavior and syntax of a state machine, using a switch-case. The example is to light the LED for 1 second, turn it off for 1 second, and repeat. Here there are two states, LED_ON and LED_OFF.

In each state, the LED value is shown under the line. The arrows are each labeled TRUE because no matter what, we'll move to the next state. This state machine doesn't have any inputs. Every second, we'll evaluate the state machine. If the state is 1, the output is 1 and move to the state 0. Here's the C implementation:

To make the state machine in C, create a variable that holds the current value of the state, define words for each numeric value that the state can be, and write a switch-case to evaluate the next state.

So far, the state can be one of two options, so the smalles size data type is selected.

The state machine is built in the loop():

Every time the loop is executed, the state machine is evaluated. The state variable (fsm_state) is global, so it retains the state.

You may notice that every second we wait 1 second and evaluate the state machine. The extra code associated with the processing of the state machine will cause the cycle time to be greater than a second! It will run a little slow. This could be interrupt driven for better accuracy.

I don't want to have to wait for a whole second. I could be accomplishing other things during that time! I would rather process the state machine at some faster interval, like 1 ms, and stay in a single state 1000 times in order to delay. 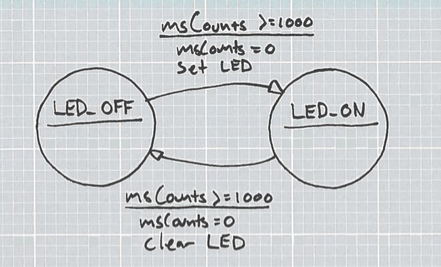 A basic toggler that is clocked faster than the toggle speed.

With this design, I won't leave the state unless the msCounts reaches 1000. The loop is delayed for 1ms instead of 1000ms. When the condition is true for a state transition to occur, the LED state is written and the counter is reset.

As before, the same states and state variable is used. The state machine is expanded to provide functionality if and only if the state transition is to occur.

Now, each state only moves if the state transition logic is true, using an "if" statement. Here's where it's obvious how easy it is to add 1-time tasks to the action of transitioning states. They're just added to the "if" statement, and will be executed only when the state moves.

The state machine works but I'm not terribly happy about how it came out. Notice that the LED state is set LOW during the LED_ON state and HIGH during the LED_OFF state. It's easy to run one-time code leaving a state, but not during the entrance of the state. It's counter-intuitive to me and I think it can be made clearer by adding two more states, each that only wait. 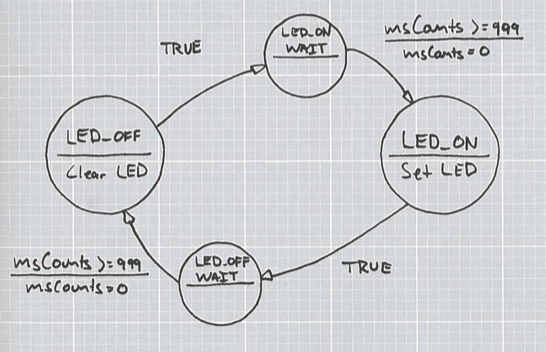 A toggler that uses an additional state to wait for the counter.

Here, the states LED_ON and LED_OFF write to the LED, clear the counter, and move on.

Timing and accuracy side note: The counter has been modified to 999 to account for the extra state, but it doesn't help much. We're getting farther off the faster we run the clock. This is because the time it takes to evaluate the state machine is starting to approach the total time to execute loop() INCLUDING the delay(1); statement.

First, the extra two states are added to the list of #defines.

The state variable is the same so we'll move on to the actual state machine implementation.

We see that the extra states have become extra cases in the switch statement. States that always move on simply assign the next state to the state variable. The delay states check the counts before assigning a new state, thus retaining the state they were in.

More timing side notes: Run the msCounts incrementer with a 1 ms timer Interrupt Service Routine (ISR) instead. Meanwhile, loop the FSM as fast as possible. This will correct timing. Keep in mind that if the code execution time between ISR calls (the state machine processing time) is longer than the ISR call interval, the program will most likely lock up.

"Yeah, so what? The LED was blinking to begin with!"

Please consider an alarm clock's alarming functions. What would its behavioral model look like? The alarm clock has several states it can exist in and has a couple of inputs that can be used to control it.

There are a few more, like time set and alarm set inputs, but this example is limited to just the alarm operations.

Described as a state machine: 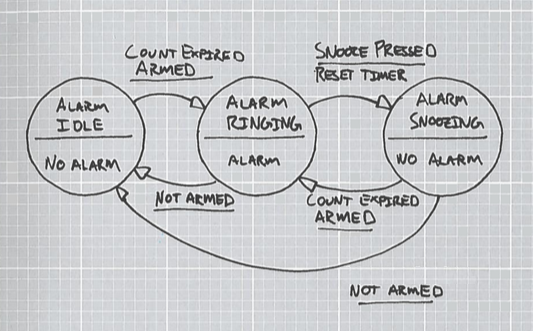 The alarm functions of the alarm clock.

Try mentally walking through the operation of the state machine. I see that I can't get from 'idle' to 'ringing' if the alarm clock is not armed. Also I can't get back to 'idle' by pressing the snooze button, I have to disarm the alarm. This meets my internal definition of how an alarm clock acts, so I proceed.

There isn't a way of actually tracking time yet, even if just for the experiment. Rather than keeping track of days, hours, etc. I want to only keep track of seconds. So I'll need to count seconds. Well, the LED toggling state machine does that already! I'll just change it to keep track and add the whole darn state machine in. 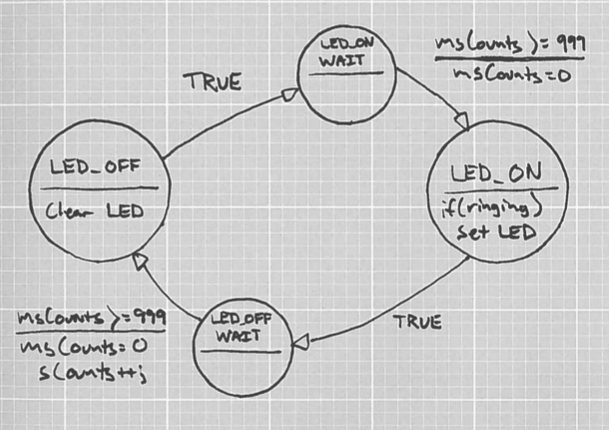 As a benefit, I can block the blinking of the LED unless the alarm is going off, and use that as the debug output.

The code is very similar to the previous examples, but has two state machines built up in it.

Next, the alarm state machine states and variables. The alarm time is set to 15 seconds from reboot (actually about 20 with error), and the snooze cycle is set for 5 seconds.

Loop() evaluates both state machines each time it runs.

To operate, close the "ARM" switch and load the program.

In my experience, any coder who can diagram a program before writing it will succeed at the program. I've written one too many programs that ended up as a wad of nested 'if' statements because I didn't plan ahead. Inevitably, I needed to add one little thing that horribly broke the program and I was forced to re-evaluate my life choices. Using tools like state machine diagrams, flowcharts, class diagrams and unit tests have allowed me to write more complex yet maintainable code (while staying relatively sane). The state machine is just another idea to have in the toolbox and I hope that it will help you in the future!

SparkFun and the Future of Arduino