AVC, a part of SparkHacks, has evolved every year since the beginning seven years ago. We are always trying to find ways to make the races more exciting, the side activities more fun and the event more inclusive for the maker and tech community.

Here are some of the changes we are planning for AVC 2015, including new programming, more external vendors, new building tours, combat 'bots and the grand opening of the SparkFun Emporium, an on-site SparkFun product store! With continual improvement in mind, we have made the following changes to AVC:

The biggest change this year is the addition of “Hack Tracks.” Hack Tracks are basically programming topics. The Tracks for 2015 are: Robotics/Soldering/Iot Hacks, Craft/Cosplay/eTextiles Hacks, Media/Music Hacks and Agriculture/Eco Hacks. Each Hack Track will have its own area at AVC, where spectators and 'bot entrants can check out cool demos, exhibits, presentations and workshops hosted by internal SparkFun staffers as well as external partners and organizations. For example, we have MOOG, makers of the Moog Werkstatt-Ø1, doing a music hacking demo. With the increased focus on being more inclusive, we have added SparkHacks to the AVC name, because it’s not just about the 'bots anymore! But it still is about the 'bots, of course. 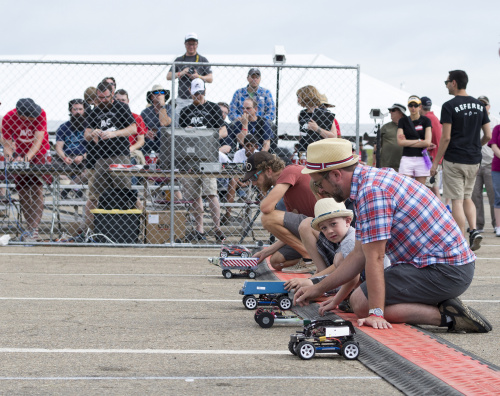 As you have probably heard, there will be no aerial this year. With highway 119 so close to the new SparkFun building, and without having the reservoir to fly over, the danger of a 'bot hitting a person, car or piece of property is just too high. That being said, we promise that next year we’ll try to find a way to bring the aerial category back. If you have ideas for how to make that happen, put them in the comments below!

We will be offering special edition building tours with a AVC slant. The tours will showcase the new building, the production floor complete with working pick-and-place machines, and some fun stuff we have going on upstairs at SparkFun that you may not know about yet (think IoT).

SparkFun is charging admission for AVC 2015. The $6.00 fee ($4.75 for admission, $1.25 for Eventbrite) will help us offset some of the cost of AVC. Each year, we spend more and more to try to make the ever-growing event bigger, cooler and more exciting. For AVC, we need to purchases event rentals, like tents, tables, chairs and generators, and supplies like hay bales, signage, and promo material. In past years, we also had to pay for the location (Boulder Reservoir), and this year, being back at the SparkFun building, we’ll be paying for increased landscaping (grass to make things less muddy), soldering supplies, and upgrades to our outdoor wifi. And that’s not even counting staff labor costs! Of course, at SparkFun we try as hard as possible to be scrappy and make anything we can ourselves, but even so, putting on an event like AVC costs money, and increasing our cost each year is not sustainable. For that reason, we decided to try to get a bit of money back from admission, as well as sponsorship from external companies and organizations for the event. We will be selling tickets at the door day-of. And you heard it here first - we will have FREE AVC 2015 tickets at the SparkFun booth at Denver Comic Con (this coming weekend) and Denver Maker Faire! So come on by! 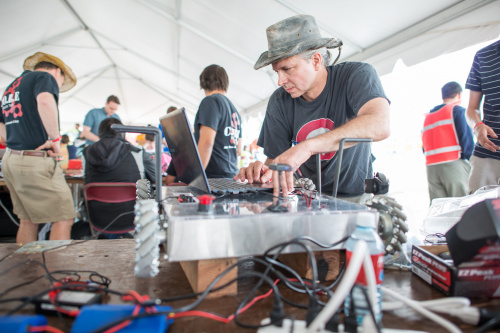 Another change this year is having external companies and organizations come to AVC! By inviting these partners to demo or sell their goods at AVC, we hope to grow the tech and maker community here in the Boulder area and allow our friends to get some exposure. We asked local tech, maker, education and fun companies to join us. So far we have the educational toy company WABA Fun and the commercial drone maker UASUSA hosting booths at AVC.

One other notable addition this year is the Combat Bots! Our own Casey “Chopper” Kuhns will be heading up the Combat Bot competition. It is based on the the SPARC (Standardized Procedure for Advancement of Robot Combat) standards and this year, we are accepting 1lb and 3lb 'bots. If you think you are up for the challenge, please register your autonomous ground 'bot OR a combat 'bot here. Let’s get ready to rumble! 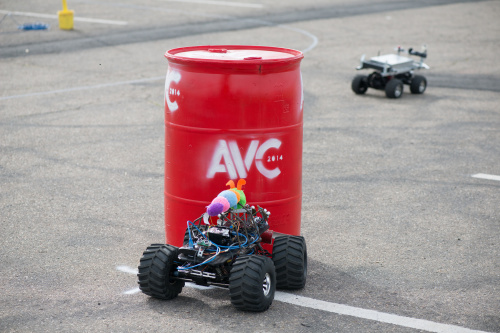 In addition to all the robot fun, we’ll be helping local humans learn to solder. That’s right, the first ever SparkFun Soldering Booth at AVC! If you have ever seen us at Maker Faire, USASEF or SXSW, you know we love to teach people to solder. This year at AVC, we’ll be running our soldering workshop featuring the SparkFun Badgers. The Badgers debuted at SXSW this year with much acclaim. These powerful Badgers not only look awesome, once soldered together the Badger Stick and LED matrix they can be reprogrammed to display new messages or control almost anything. And of course, once you are inside AVC, all activities are free, including soldering!

The last, and maybe most exciting change to AVC this year is SparkFun’s much anticipated retail space grand opening! That’s right, we’ll be debuting the new SparkFun Emporium at AVC, complete with retail sales on a select mix of products and some special AVC bundles. The space looks amazing and is full of electronics demos, a SparkFun timeline and of course all the cool products!

So come on by to AVC 2015. It’s SparkFun’s biggest event and this year promises to be the most unforgettable yet. Remember, AVC will be held on Saturday, June 20th (exactly one month out from today!), at SparkFun Headquarters, and will be open to the public from 9 a.m.-4 p.m.

If you'd like to buy ticket and register to spectate, please go here.

if you like to register a 'bot for ground races or the combat competition, please go here (you must be logged into the SparkFun site).

We hope to see you there! 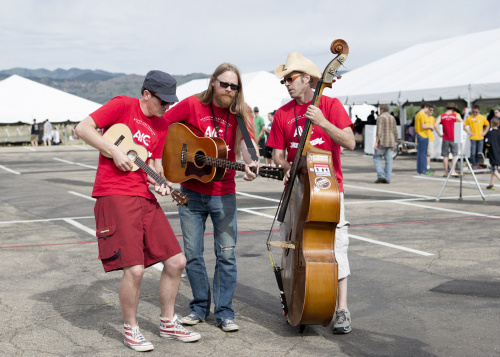 Just because you can, doesn't mean you should

Enginursday: A New Approach to FPGAs!