6 Things We Learned from our Community Partnership Program in 2017

This month, SparkFun is celebrating the first anniversary of its Community Partnership Program.

SparkFun's Community Partnership Program facilitates hardware donations to applicants who are using maker technology to improve their communities. Here are some quick stats from 2017:

When we launched the program in January 2017, we had no idea what kind of interest we’d receive or what kinds of requests would come through. We had an overwhelming number of school and youth organizations apply, citing causes like maker education, supporting girls in STEM fields and increasing opportunities for students to prep for real-world careers. Here are some of our observations from reviewing over 600 applications.

For many of us, the maker movement is still a cause in and of itself to get behind, but through our Community Partnership Program we saw projects from makers of all ages aimed at solving other social issues. We saw students at DSST Cole High School in Denver that will be monitoring pollution during construction on a local freeway, and a group of students from Ohio State University’s Toy Adaptation Program at the College of Engineering hack popular toys to become assistive tech devices. 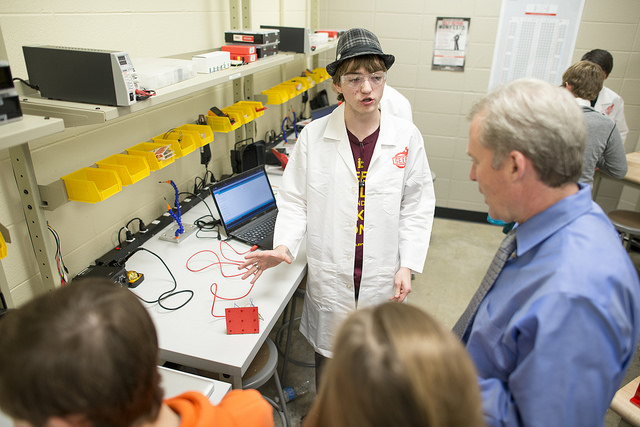 In addition to the diverse range of social issues represented in the applications, a vast number of them sought support for initiatives designed to support girls and women in STEM fields. We’ve seen some incredible programs across the country that leverage e-textile tools like LilyPad to bring together sewing and circuitry, including the Society of Lady Makers in Atlanta and the Marston Science Library at the University of Florida. Some of our 4-H partners have used conductive paint to create interactive art, including one wall mural that played recordings of students' musical performances.

We've also seen partners introducing women and artists to electronics through hackathons like the all-female Break to Make at the University of Southern California, and Hack Music LA at the LA Philharmonic.

The global maker movement is alive and well

We had no idea we’d receive so many applications from around the world, most notably from students in India, South Africa and Nigeria. We heard from a nonprofit in Lagos, Nigeria, that provides free prosthetic devices to folks with upper-limb discrepancies; an amateur radio operator running an aerospace program in Port Elizabeth, South Africa; and a college student in the Netherlands using the LilyPad Vibe Board and other SparkFun hardware to create wearable devices that detect and reduce tremors for individuals with Parkinson’s Disease.

All over the world, teachers and students shared with us their commitment to use maker technology to teach 21st century skills and solve problems in their communities. 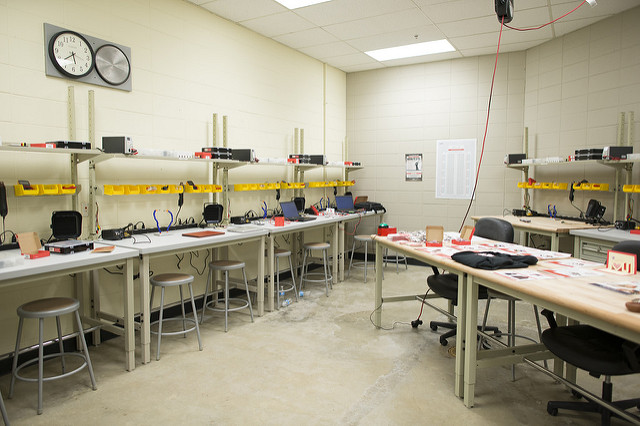 Robotics is your first priority.

Everyone is building robots! Well, not everyone, but the term “robotics” was mentioned 803 times in Community Partnership applications this year, while “coding” was a close second at 774 mentions. We saw a handful of swarm robot projects, autonomous vehicle projects and robots that can perform specific tasks, like picking up certain objects.

Many teachers expressed the challenge of introducing robotics to students when they themselves have very little experience, and shared how valuable simple tools like the SparkFun Inventor's Kit for RedBot or the micro:bot expansion kit for micro:bit are to beginning robotics. We saw a lot of robotics activity at the high school and university levels, as well as a lot of early interest at elementary and middle schools. Lesson learned: More resources for teaching robotics are in high demand! If you haven't already, check out the new version of our flagship SparkFun Inventor's Kit, where building an autonomous robot is the culminating project.

STEM thrives in the summertime

Holy STEM summer camps, Batman! Big shout-out to all the schools and libraries spearheading STEM summer camps for kids — you are all heroes! From soldering and soft circuits, to conductive paint and programming, during the summertime it’s likely you’ll find students leveling up their skills. Campers at The Refuge in Sunbury, PA, learned to solder by making badges to play an electronic game of Rock, Paper, Scissors. Students at a Mariachi music camp at Oregon State University shared their recordings via an interactive mural created with a Bare Conductive Touch Board, conductive paint and copper tape.

Well, one thing’s for certain: SparkFun hardware was well-represented at SpaceX’s first collegiate-level, hyperloop design competition. Over the course of last year, we saw an uptick in the number of student applications for corporate- or government-backed projects and competitions, from NASA to SpaceX and, of course, FIRST Robotics. 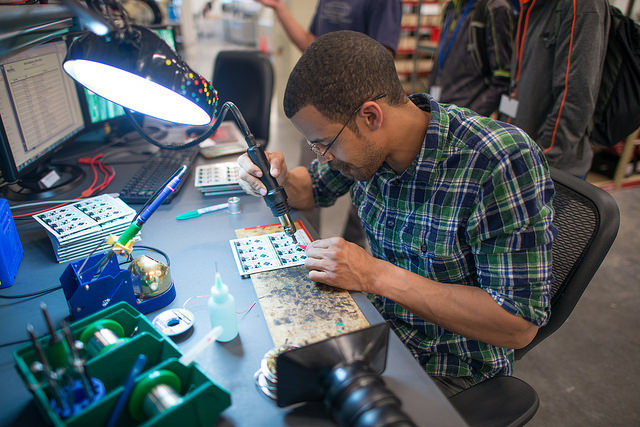 Do you have a cool project you’ve been looking to get funded? Do you want send us some photos of your build in exchange for free hardware? Take a minute to apply to our Community Partnership Program here.