Making the World Smaller with Technology

Technology is making it easier and faster to do business, share information, and even argue with strangers around the world, but I believe there's more to it than that.

Happy New Year! Back in December, our CEO Glenn and I had the pleasure of leading a SparkFun tour together. This is nothing new - we offer tours of our building just about every Friday at 2 p.m. If you’re in the area, you should stop by to see where the magic and the mayhem happen!

A little mayhem on Pi Day, and a little magic on < insert any day >. (The mayhem and magic are often indistinguishable.)

However, this group was slightly different from our usual tours in that the entire group was visiting from Kyrgyzstan. They had interpreters with them, although most of them had a tremendous command of the English language. And while it was fun to share with them the history of SparkFun, how and where we do all of our design and manufacturing work, and even where we drink beer and play pool, it was just as interesting for us to learn about them.

One of the things that we discussed at length was our open source business model. This was of great interest to them, as Kyrgyzstan was part of the old Soviet Bloc. This meant that everything was open source, inasmuch as your work was not considered your own, but rather the property of the people (read: the government). With the collapse of the Soviet Union, people became very protective of their property, both physical and intellectual, and understandably so. They were very interested to know our thoughts and concerns, if any, of a larger company, rivals, or even government entities swooping in and stealing all of our ideas, or trying to buy us out.

This interest seemed to stem from the fact that many of our new friends are budding entrepreneurs, and were eager to learn all they could about a now-worldwide company that was started by a single engineering student in his college bedroom. And why wouldn’t they be? It really is a great story. In the short span of a decade, Nathan Seidle went from a college student with no business training to the founder and CEO of an electronics company who was giving testimony to Congress on the the role of technology in innovation in America. (If you’re interested, you can read what he had to say here.)

(Author's note: Since my writing of this article two days ago, the transcript of Nathan's testimony, along with the video, have disappeared. Perhaps once the government shutdown ends, I can contact someone to figure out what's going on. In the meantime, you can read a small bit about his testimony, and that of others, on EFF's page, here. )

Viacheslav Kim was there; he's a robotics engineer and CEO of http://geek.kg. Aside from being a reseller for Arduino and Raspberry Pi, there is also a great collection of sensors, modules, robotics parts and tools. Geeks is also working on putting together educational kits for learning the basics of electronics, circuitry and soldering. He was kind enough to gift me a set he is currently developing. 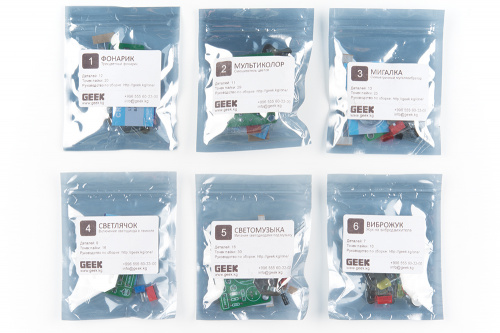 -> Geek.kg's six-board teaching set for learning the basics of electronics, circuitry and soldering.

It contains six small projects, including a basic Torch (flashlight), an RGB LED Color Mixer, an adjustable speed Flashing Light, a Glow Worm, which uses a small photocell to illuminate an LED when it gets dark, a Light Music Kit, which illuminates LEDs when it senses sound, and a VibroBeetle. Each is designed to help people learn or hone their PTH soldering skills, along with basics like layout and component orientation.

I also spoke quite a bit with Gulnaz Turbatova, founder of Detskly Nauchnyl Kompleks, or the Children’s Science Museum (www.dnk.kg).

Inside the Hall of Experiments, one of many different areas for kids to do some hands-on learning.

DNK offers a wide variety of classes, activities and shows, not only aimed at teaching science to young people, but at getting them excited to learn about science. They offer things like a school preparation course, shows about electricity, fire, ice, and even glucose (where they also learn to make their own cotton candy), and activities including robotics, aeromodeling, magnetism, electricity and astronomy. They even offer educational field trips! We discussed SparkFun’s educational programs, our ever-growing library of tutorials, and the importance of getting children excited about the sciences at an early age. It was nice to see in some of their videos children assembling some of the prototype kits from Viacheslav’s Geek website.

In this instance, this is what I’m talking about when I refer to technology making the world smaller – not necessarily the fact that we can email across the country, or FaceTime around the globe. No, I’m talking about the true human connection - the fact that Gulnaz can help out Viacheslav by using his products in his classes, and Viacheslav can help out Gulnaz by suggesting the Children’s Science Museum for young people who want to gain a better understanding of science. I'm talking about the fact that Glenn and I were able to spend a morning with a group of wonderful people from the other side of the world, and (sometimes with the help of the amazing interpreters) talk about our shared passions, our visions for growth and our hopes for the next generation of engineers and scientists. It's nice to know the next time I’m in Bishkek, I can see a familiar face when I stop in and check out the Children’s Science Museum, or say hello at Geeks, and the next time any of them are in Colorado, they can stop by and say hello to a friend at SparkFun.

Any good stories about new friends from around the world that you've made thanks to your passion for technology? We'd love to hear your stories in the comments below!