On June 1st, the Longmont Innovation Center (IC) hosted their first Aerofest event. The day was filled with airshows, battles, races, vendor tents and food trucks. Many R/C pilots are makers at heart, and it felt much like SparkFun’s AVC. Best of all, it was great to see lots of youngsters getting interested in aeronautics. My four-year-old son and I had a blast watching the airplanes, and he even had a chance to build his own laser-cut glider. 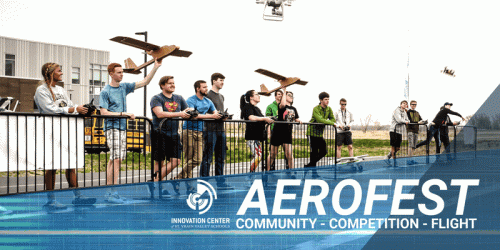 The IC has a focus on STEM education though many awesome programs including robotics, aeronautics, computer science and much more. Check out their website to learn more. Some of SparkFun's employees have participated in their mentoring opportunities, and it's a wonderful way to share experiences and help some young engineers with their projects, including atmospheric research, shark wands and Aquatic Robotics.

Aerofest was hosted by the IC's aeronautics program. Check out their YouTube channel to see some of their DIY aircraft in flight. They have many opportunities for high school students to learn to design, build and fly their own aircraft. Through a variety of courses, they learn about the iterative design process and many aeronautic engineering principles. 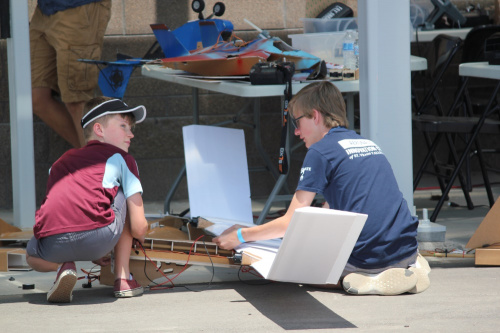 Two high school students building an airplane of their own design from scratch design during the event.

The two students above are mounting the wing to fuselage of an aircraft they designed and built themselves. It was, by far, the largest aircraft at the event. They designed it this way not only to test their engineering skills for larger airframes and motor systems, but to also compete in a battle event. Most of the airframe was cut from foam board using the IC's in-house laser cutter, and pieced together with a healthy amount of hot glue. It was quite ambitious to build an aircraft from scratch the morning of the event, but they pulled it off! 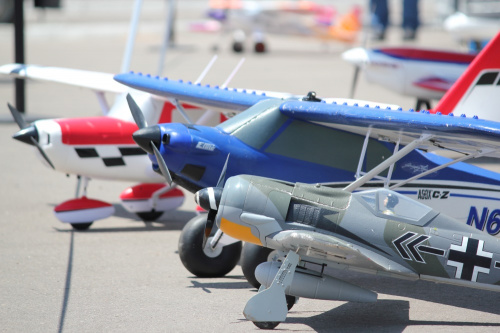 Lots of planes on display to get a closer look.

In addition to the many DIY laser cut airframes flying at the event, there were also plenty of traditional remote control airplanes out on display - most of these also flew at some point during the day. There were a couple scheduled aerobatic airshows and flying challenges, but at any given moment, you could look up and see someone flying around with the occasional loop or roll. 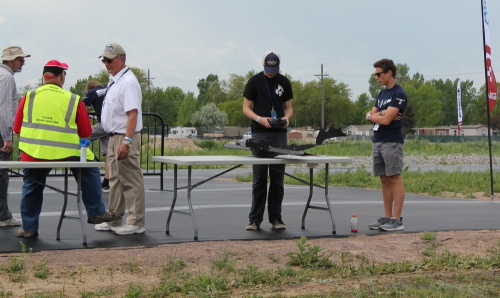 Some teams of students had fun with the look of their DIY airplanes. This dragon sure looked awesome! 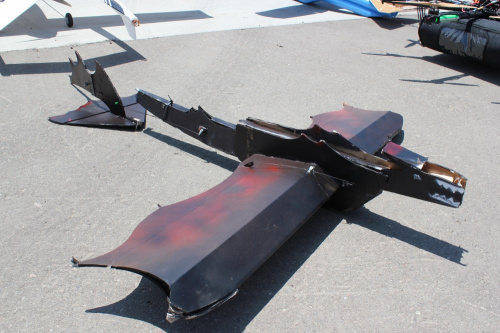 The cracked tail on display for the afternoon

Unfortunately they had a bit of trouble on takeoff and after a couple moments of flight it came down hard on the runway. This broke the tail off, and they decided to fix it another day. All part of the design process! 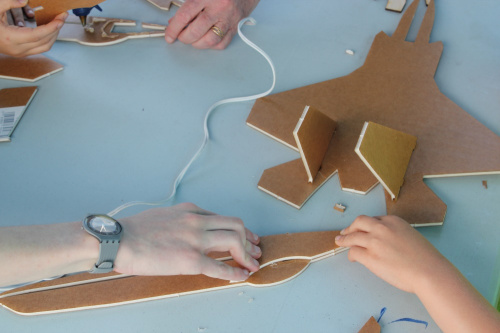 Glider kits getting built up

The STEM zone was a great opportunity for anyone to build a glider and to have some fun with flight. The tables were crowded and glue guns were hot. Kids were popping all the parts out of the foamboard and building them up as fast as possible. 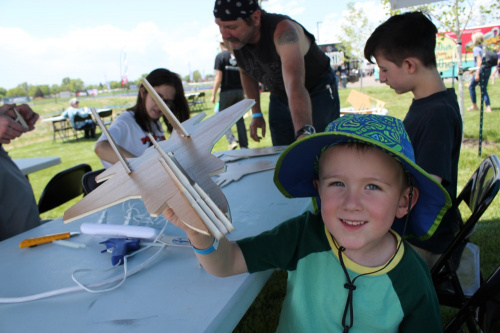 The glider kit was very well thought out, and was actually designed by one of their students. One of the nicest features: there was no necessary order of assembly. You simply popped out the parts and then started putting them together with hot glue. Everything lined up nicely and made sense. Well done! 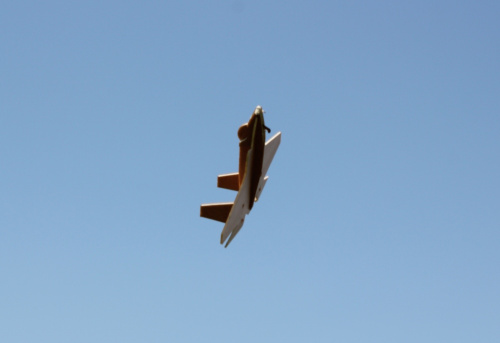 Negative Ghostrider, the pattern is full.

Word quickly spread that the tail pieces could be bent to affect the flight path and in no time, gliders were turning, rolling and flipping. 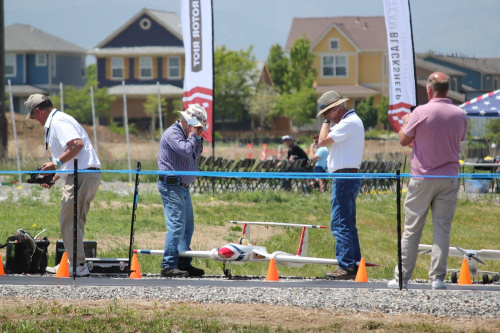 Next up was a jet engine demonstration. As you can see in the pic above, the pit crew had their ears covered – that thing was loud. The plane can fly over 150 mph and requires a bit more airspace and runway, so this demo would only include a rev up of the engine to full throttle. They turned the smoke on too, which was pretty fun to see, although there was a small, accidental fire near the tail from an error in the smoke timing. The jet pilots made it seem as though this sort of thing happens sometimes, and I'm glad they had a working kill-switch and fire extinguisher nearby. 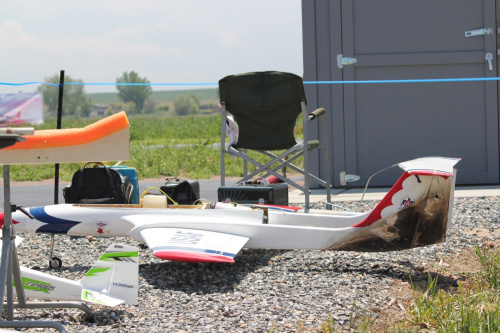 The tail fins got a little extra crispy from a small fire during this demo. 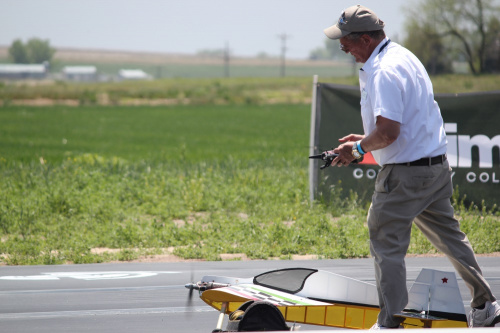 Preflight check before the aerobatic show

The fixed-wing aerobatic show was another highlight of the day. This plane was mostly made of lightweight balsa wood, with a thick wing for plenty of lift and a tall, thin fuselage for good knife edge performance. When he fired up the motor, I recognized the low pitched rumble and knew it was a four-stroke. I especially enjoyed the smell of the nitro airplane fuel exhaust. He revved up the motor to full throttle and leaned out the mixture - yet another ritual I used to love (in my gas-powered days). 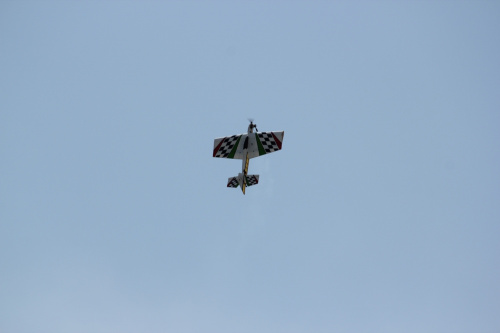 Then he nodded to the MC, Jake Marshall, and they turned on the music. Of course, it had to be the Top Gun classic, “Highway to the Danger Zone”. It took off in about two feet of runway, and he went into a spinning vertical climb. He did all the classic maneuvers too: rolls, loops, flat spins, hammerheads, snaps, knife edges and even some pretty low hovering. He ended with another classic move: a dead stick landing. 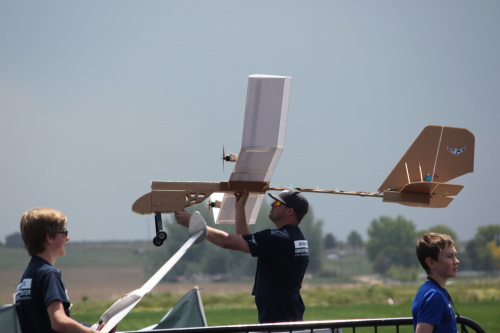 Launching "The big one" for its first ever flight: a battle!

After lunch, we watched the fixed-wing “battle.” It started with hand launching the big DIY plane (designed and built by the IC aeronautics team). The idea behind this competition was simply to have everybody launch their airplanes and then try to crash them into each other. The last plane flying wins. Let the mayhem begin! 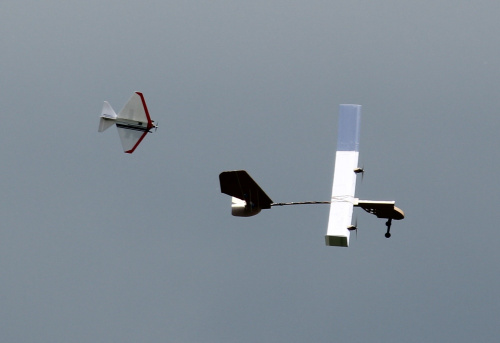 The mighty mini coming in for a hit!

An ideal “hit” is when one pilot will surprise another from above and quickly come down to hit the lower plane with its propeller. Usually, this cuts a piece of the airframe away, and it will come crashing down out of control. After a few minutes of the battle, it became quite apparent just how difficult it was to have an intentional hit.

Then the game became “try to take the big one down.” About halfway through the battle I saw one younger pilot launch his smallish World War II-era bomber. I don’t think he actually had a successful hit, but it was such fun seeing him try – fearless and not worried about damaging his plane. After all, there's always more foam to cut and plenty of hot glue! 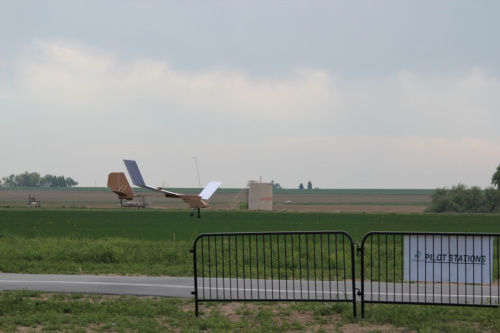 The big one on final approach looking good.

Then the time was up, and a handful of planes were down in the fields. It was time to land the big one. The young pilot flew a nice pattern and then gently touched down. 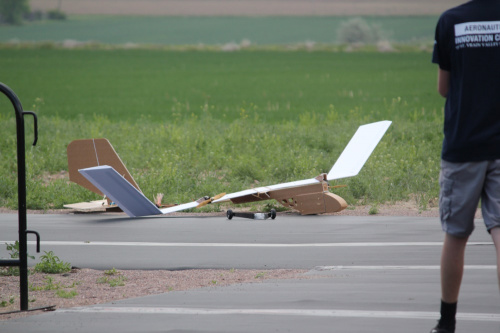 Unfortunately, the landing gear still ripped right off. I don’t think any pilot could have avoided that. The attachment method (hot glue, I presume) was just not quite strong enough. Back to the drawing board, but that’s what it’s all about! 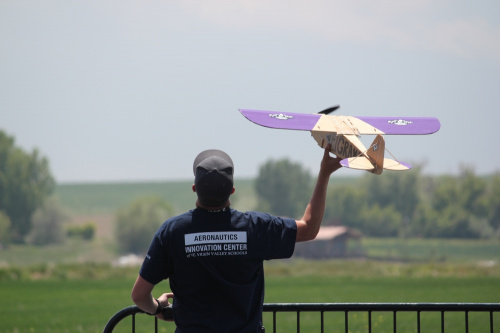 Jake Marshall, head of the aeronautics team, launches one of his favorite DIY airplanes.

The event was well attended, and much fun was had by all. The Longmont Innovation Center is planning on hosting the event again next year, so follow them on Twitter, YouTube, or their website to stay informed. Also, they do offer tours and have a retail store with glider kits available, so don't hesitate to reach out and arrange a visit. Next year, I am for sure bringing a couple airplanes to fly. Hope to see you all there!

How to get a Bootloader on your Board