A look at some of the demos Bosch had on display at the annual CES Conference.

Back in January, we had a SparkFun team check out the annual Consumer Electronics Show in Las Vegas to see the latest and greatest tech being released. And what do you know, our good friend Bosch was there with a whole booth of projects that solve real-world (and Lego-world) problems using the same kind of consumer electronics as SparkFun. The applications they built with their newest sensors are great sources of inspiration for anyone - engineers, makers, etc. - on how to solve problems with environmental sensors.

The majority of these demos utilize machine learning, and are able to predict gas compositions and gestures based on training data that the sensor has already learned. This is possible due to Bosch integrating their high tech hardware with their new software platform, the BME AI-Studio. This software is very user-friendly and walks through sensor configuration, data analysis/labeling, and training to create an end-use product. You can check it out and download the software on Windows or Mac to begin exploring their extensive AI libraries and documentation.

For this first demo, Bosch teamed up with Dryad, a German company who are implementing a sensor-based IoT network that will be able to detect wildfires and provide insights into the health of forests.

To start: How is it even possible to detect wildfires in their early stages? Well, there is a process called pyrolysis, which is a thermochemical decomposition of organic material at high temperatures. Basically, the flame you see in a fire is not from the wood burning, but actually a byproduct of pyrolysis and the gases being released. Thus, if you could detect those gases as soon as they began, you might be able to isolate a wildfire from the very beginning and prevent it from spreading. That's exactly what Dryad is trying to do!

Dryad has built a solution that combines Bosch's new BME688 sensor and the BME AI-Studio software to create artificially intelligent sensors that communicate via LoRaWAN and alert of forest fires even in early smoldering stages. Plus, the sensor is practically maintenance-free, since the sensor uses ultra-low-power and it's powered by a small solar panel instead of lithium batteries. 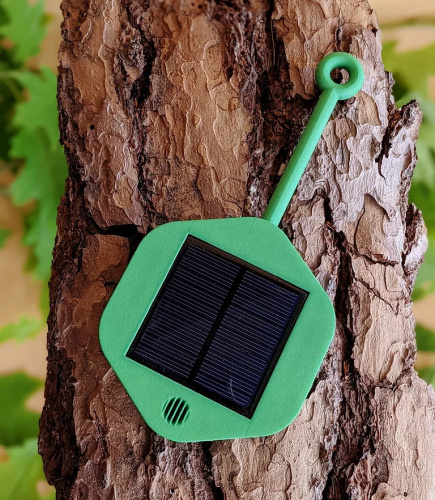 The next demo Bosch had on display was really fascinating because they took a sensor that might traditionally be used in environmental applications, and translated it into an asset-tracking application. They used their BMP580 barometric pressure sensor to asset track an object as it goes up and down in altitude, like on multiple floors of a skyscraper. 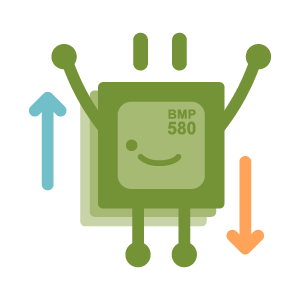 For this project, they miniaturized the whole thing using Legos. They sent a Legoman up and down a series of building stories, and through Bluetooth, communicated to an iPad exactly which floor he was on as he traveled up and down. The sensor is extremely precise - especially on a scale this small in Legoland - and is able to detect which floor it's on as Mr. Legoman continuously moves up and down the elevator shaft.

Big tech in a small world!

This is the kind of demo that might make you reevaluate how you tackle problems in a project - perhaps all you really need is an altitude sensor rather than a GPS module. It helps to rethink the problem that actually needs solving in the first place. For example, while your dead reckoning board might be advantageous for precision in city streets, it may not be as good at tracking assets inside of buildings like an altitude sensor can.

The video below is similar in concept, but uses the BMP390 instead of the BMP580. 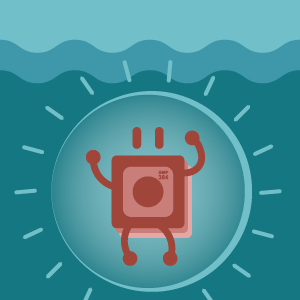 Bosch also used one of the their barometric pressure sensors to measure pressure change in water. Specifically they used their BMP384, covered in a gel-filled cavity, to detect pressure change as it is submerged underwater. This kind of demo could be extended to larger applications like sensing water pressure in pipes to predict flooding. 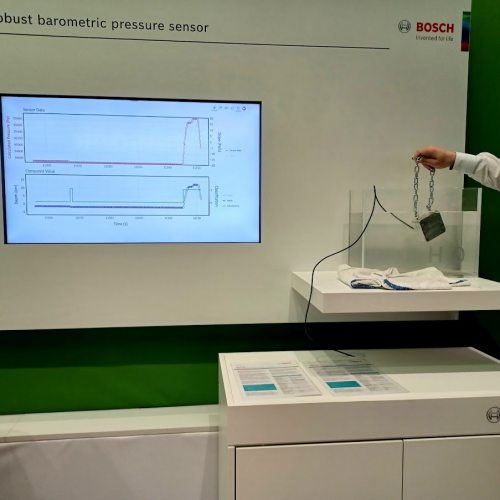 Looks like the next step is attaching that sensor to an anchor!

Similarly to their altitude asset tracking demo, Bosch showcased another nontraditional solution to a common application - gesture sensing. Lots of people create gesture recognition projects based off of imaging, but Bosch has developed a sensor, the BHI260AP AI Sensor, that can predict specific gestures using orientation estimation and a 6 DoF-IMU. They have utilized their machine learning software again to assist in specific sports gesture recognition.

Bosch envisions this sensor to be most effective in a smart watch and demoed it as such. The BHI260AP AI Sensor can track which fitness movement you are doing purely based off of orientation data and self-learning AI software. Plus, they've extended that capability to swimming, so it can count how many stokes you do and detect the style of swimming to provide a plethora of fitness data to nerd over. 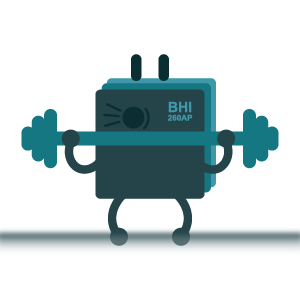 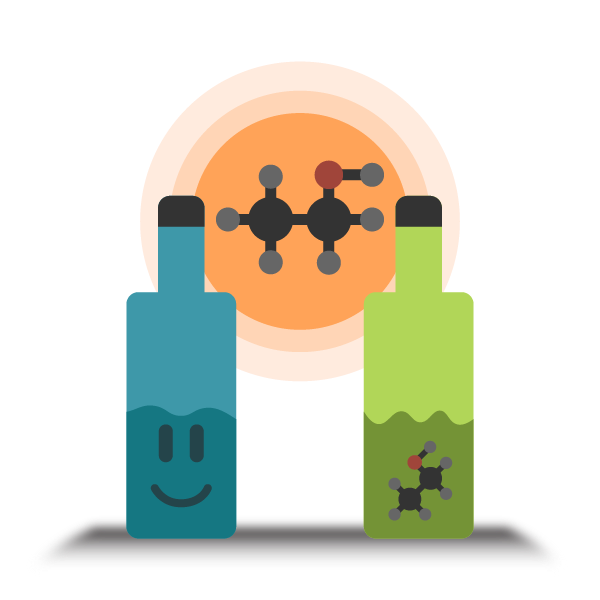 The BME688 sensor can detect Volatile Organic Compounds (VOCs), volatile sulfur compounds (VSCs) and other gases such as carbon monoxide and hydrogen in the part per billion (ppb) range. 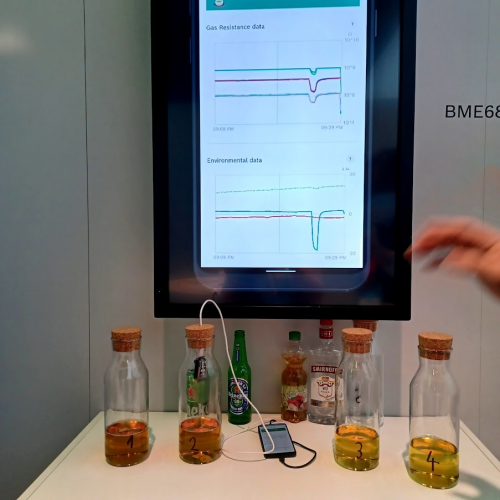 Just based on sight, you probably can't tell which bottle has alcohol or not...that's where the BME688 comes in.

Takeaways From These Demos

The CES conference is not only an excellent opportunity to see what tangible new products are being built in the industry, but it is also a great indicator of current and future technology trends. The Bosch booth is a good example of this - they have obviously built some very advanced new sensors, but what's more interesting is what they've done with the new hardware. They are using these sensors to solve problems that traditionally may not be solved with environmental sensors, and are pairing them with machine learning and IoT to create really powerful applications. And the greatest part is that a lot of this technology is readily available to you too. You can use environmental sensors, or the BME AI-Studio, to solve whatever problem you have in your project, just like Bosch has demoed. We hope these demos give you as much inspiration as they've given us!