In early December Nate and Chris paid ThinkGeek a visit at their HQ in Fairfax, Virginia. Here's a rundown of what happened!

Nate knocked on my door a couple months ago recommending a trip to ThinkGeek. This company, known for its excellent line of physical geekery, is apparently not so unlike SparkFun in a variety of ways. 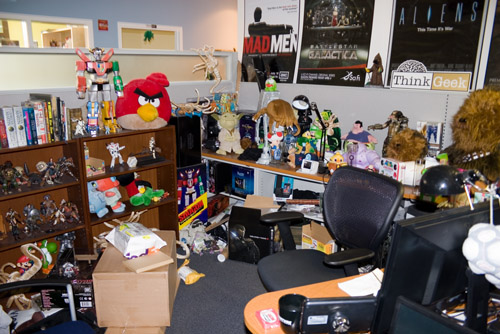 The standard-issue ThinkGeek cube.  This one's home to Kochis.

For one, ThinkGeek rolled their own ERP system (called Sphorb). If you've been an avid reader of SparkFun's blog for some time you'll know that we've been very open about our own discussion our internal systems. On the one hand we have Sparkle, a custom-built, home-grown suite of web-based tools that does nearly everything around here from shipping boxes to running the production floor (everything, that is, short of financials). On the other hand there's always the notion of purchasing a large system that can handle all of that (including financials) under one hood, as it were.

The debate has been lively. We've recently committed to sticking with Sparkle for the next 18-24 months while we vet out a new finance module (our current one, QuickBooks, doesn't play so nicely with Sparkle... or anything else, for that matter). It turns out ThinkGeek is much in the same boat! An internal development team commands the growth and maintenance of Sphorb with Oracle for the financials (and a similar lack cross-communication between them). Suddenly our two geek-driven eCommerce companies had a lot more in common! 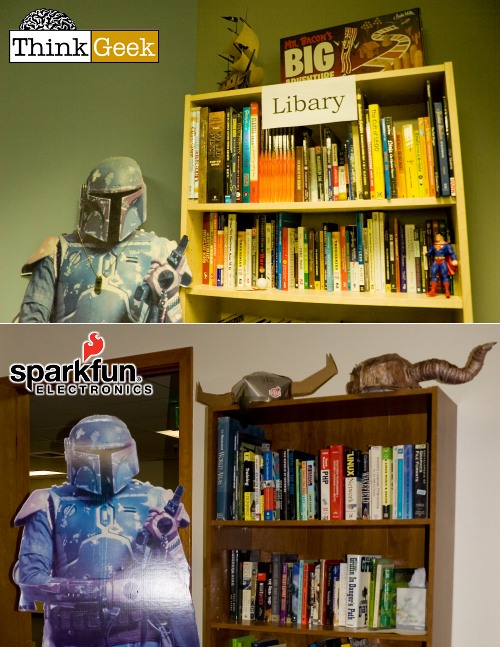 Touring ThinkGeek even more similarities revealed themselves. Consider, for example, their Libary, guarded by a sinister bounty hunter. Our Fett took a leave from guarding the IT Den briefly for the shot above. When the biggest contrast is Mr. Bacon's Big Adventure versus the helmets from our recent Viking Funeral I'm left with one obvious conclusion: great companies think alike. 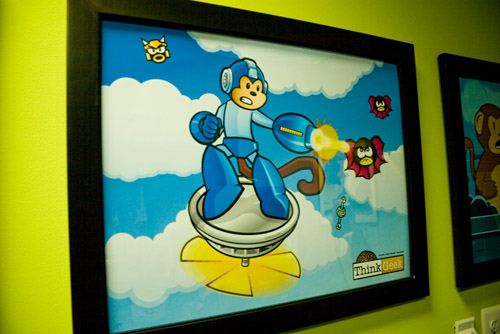 By far the best catalog cover in my biased opinion.

The differences between our respective organizations are, however, worth noting. One reason we were able to talk on such friendly terms is due to the stark lack of overlap in our product lines. SparkFun has a modest selection for the retail consumer whereas ThinkGeek is so retail-oriented that they send out colorful product catalogs almost weekly.  Each catalog gets a fresh new cover featuring Timmy, the ThinkGeek mascot, and some of the best were blown up and hung around the office. I was helplessly drawn to this fantastic MegaMan spoof which was far superior to the Blade Runner equivalent espoused by Fraize, our most gracious host. Props to the graphic artist who went so far as to throw in a baddie from the original game in the background, there.

Speaking of Timmy... recently a contest was offered up for customers to design tiny, physically real costumes for the popular Timmy plush toy that's sold by the barrel-full.  They had many responses and all the well-dressed Timmies now sit gathered on a shelf in the corner. My favorite would be the one of Shaun, cricket bat and all. 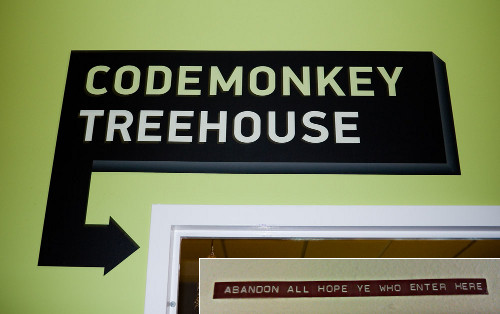 After a spirited morning with said gracious host and professional Gadget Wrangler we were led into the CodeMonkey Treehouse. Here we were pleased to meet Jacob (Code Monkey Ringleader) and Seth (Senior Monkey Tamer). ThinkGeek had these really crisp, large-print wall stickers for nearly every room (the couple in this shot lead to the server room and out into an exit hallway). Inset you'll see what little warning we give to guests of IT here at SparkFun, tastefully rendered with a Dymo label maker that's probably older than I am.

Now here's the funny part about all this: after a couple of hours chatting about Sparkle v. Sphorb and common challenges we've both faced and overcome in different ways, I came away feeling like my brain was overfull with new, useful knowledge. Lo and behold later that day I get a thank-you email from these guys expressing gratitude for all the knowledge that we brought to the table, and tactfully apologizing for asking all the questions. So I guess we both walked away feeling like we gained the most. 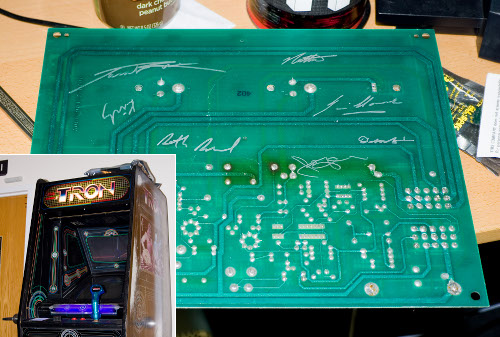 Deep within the Codemonkey Treehouse was an original Tron arcade cabinet in fine form. ThinkGeek acquired it in 2007 for the company's eighth birthday and it was the first such perk purchased for the staff to enjoy (which has since been joined by a few others). The board shown above was from its original busted power supply and, as old hardware tends to accrete nostalgia, it was signed by the IT staff. SparkFun is no stranger to the arcade game phenomenon, of course. Our first was the Ms. Pacman table-top game purchased around the same time. This was gradually followed by Asteroids, Omega Race, and just weeks ago, a Neo Geo with 161 games. 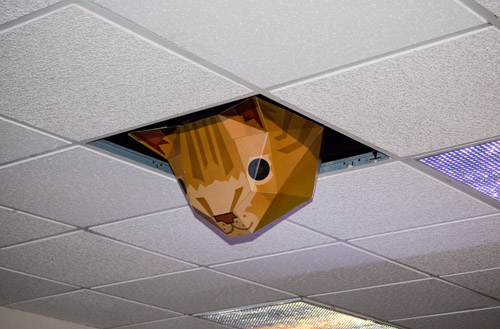 Out in the main cube farm we ran into Hilary, our former Parts Hunter, who has spent the last couple of months still applying her penchant for tracking down oddities. She sat beneath the omnipresent gaze of a geometric ceiling cat. Throughout the rest of the day we enjoyed the company of several other resident monkey-variants, such as Jimmy and Dan from the sprawling customer service team and Mike, the Ecommerce Analyst. All discussions were lively, informative, and fun. ThinkGeek's got a sharp team. 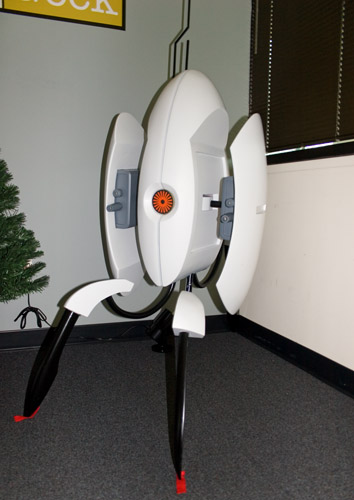 That would be a Christmas tree being guarded by this turret.

When the day closed Nate and I made our way out, past Willy's impressive Portal turret replica and into the Fairfax evening.

Nate and I had just enough time for a beer before we were both boarding planes to different sides of the country. Our day at ThinkGeek was what I'd glibly call a highly efficient business trip. In a scant eight hours wandering the colorful halls we learned so much about how a company with so many similarities is doing their thing in the real world. A day at a convention listening to talks pales in comparison.

We've also extended an invitation out to ThinkGeek to come tour our own shop. There's still much knowledge to share between us and both Nate and I were very grateful for the opportunity. Here's hoping that our discussions ultimately lead to both SparkFun and ThinkGeek becoming better, faster, and stronger!

And to you, SparkFun blog readers, an open invitation: Want to peek under the SparkFun hood? Do you work for or have an in at an interesting and comparable company? Drop me a line! Maybe we can host you or come visit your shop and the both of us will be all the better for it.