Another demo, some more new products, and witty banter.

Time flies. It seems like just yesterday I was playing around with Sparkie. Well, this week we built something else. It's not as dangerous, but it sure is fun. It doesn't have a name either. Let's call it Whack-Dome. Check it out in the video below.


Just as a side note, our normal videographer Gregg was out this week, so Dave, Todd and myself decided to tackle the video. We don't have a Vimeo link this week, sorry!

We had less than a day to put this whole thing together so there's still some tweaking left to do. Eventually we want to fully enclose it so you can put it on a tabletop to play, fix the scoring, and put a couple different game variations on it. But for right now, it's pretty fun and a great example of what can be done with the big dome buttons. 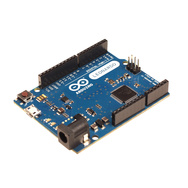 Last week at Maker Faire, Arduino announced their newest development board, the Leonardo. Anyone that's been following Arduino lately knows that this board has been in development for quite some time. We released the Pro Micros a few weeks back which use the same IC and bootloader. The Leonardo uses the ATmega32U4 and is the same form factor as previous Arduinos, but now uses a Micro-B USB connector. We're still waiting on our initial stock to be shipped, but are taking backorders now.

Our big dome push button has been pretty popular.  But, it was lonely, seeing as we only carried it in red. So, we decided to get it some friends! We now carry the big dome buttons in yellow, blue, and green! Hooray. They are the same button, just in different colors. They use a 12V LED for illumination, but we found it works fine at 5V, albeit a bit dim. 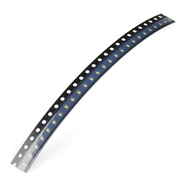 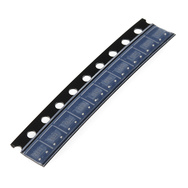 We've had a lot of requests for us to carry SMD parts. We don't necessarily want to sell singles of tiny components, but in strips of 10, 25, or 50, it makes a lot more sense. To test the waters, we grabbed some of the most common components we use in production and cut off some strips and are offering them for sale. We don't want to compete with Mouser or Digikey, and if you need large quantities, we recommend you use them instead. But if you just want a simple resistor for making an Arduino clone or something, we've got you covered. We've got 10k and 330 ohm resistors. Some red, green, white, and blue LEDs. For capacitors, we have 10uF and 100nF. And lastly, we have 3.3V and 5V regulators. 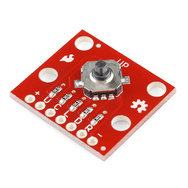 Remember the 5-way tactile breakout? Well, we have a new version that fixes the silkscreen. It's still the same board you know and love tolerate, but with correct labels. Sorry about that! 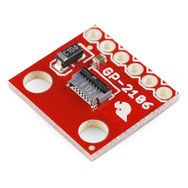 Speaking of corrections, we have a corrected version of the GP-2106 Breakout Board. This one moves the capacitor over a bit so it doesn't get in the way of the ribbon cable connector. Other than that, it remains the same.

Another week, another set of new products. Thanks for reading! I'm going to go back and try to get the high score on Whack-Dome. See you next week.